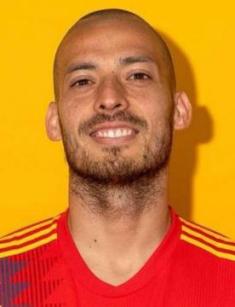 The Spanish soccer player David Silva’s career could have been different if it had not been for his height. The 14-year-old athlete wanted to join Real Madrid’s youth team; Vicente del Bosque himself watched junior candidates. However, the coach believed Silva was too weak physically. The club administration could hardly imagine they would offer €25 million for the rejected player ten years later.

By that moment, David won Copa del Rey with Valencia, UEFA European Championship, and FIFA World Cup; he became one of the top midfielders in the world. It was Real’s contribution: the athlete accepted his body metric limits and counted on speed, dribbling, and technique. It was the right choice: Silva proved to be a key player in the Spain national team and Manchester City, where he began to play in 2010 after rejecting Real’s offer.

The future star of the Citizens was born on January 8, 1986, in Arguineguín, the Canary Islands. Silva became the first native of the archipelago who won the World Cup in the Spain national team. The boy’s mother, Eva, had Japanese roots and Asian eye shape, and Silva inherited it. He was nicknamed Chinese in Valencia academy.

David’s father, Fernando Jiménez, worked as a police officer. He used to play a semi-professional soccer team, and the son accompanied his dad in training and matches. Little Silva would practice on his own outside the field or watch players and give them balls. He was responsible for his duty and did not miss a training even when he broke his arm.

At the age of nine, Silva joined the youth team of San Fernando. He was a goalkeeper at first, but the coach realized soon that the newbie was better at attacks. Similar to his icon, the Dutch halfback Michael Laudrup, David tried to play in the midfield; he kept the same position as a professional.

After Real Madrid rejected the young athlete, the family persuaded him to try another club, Valencia. Although David agreed to move to the mainland, separating from the parents was challenging for him. Eventually, the club administration offered Silva’s father a job of a guard in Mestalla Stadium, the home base of the team, and the parents moved to their son.

The sportsman enjoyed his first success in the youth team: he won the FIFA U-17 World Championship Bronze Ball in 2003, and Valencia took the second place in the tournament. However, the promising 18-year-old player did not have a chance to perform for the club during his first season: he went to Eibar on loan.

It was a second-division club. The newcomer fitted in perfectly and played in 35 matches, scoring five goals and assisting about ten times. As a result, the club finished the season with its own record: the fourth place.

In summer 2005, Valencia B took the athlete back but lost in the 1/8 match; Silva scored four goals. Once again, he failed to be selected in the main team and went to Celta that had just returned to La Liga.

The sportsman’s results were just as good as the year ago: 34 matches and four goals. Celta became number six in the overall rating – only three positions lower than Valencia. Finally, the midfielder could feel confident about joining the first eleven of The Bats.

David debuted in a guest match against Red Bull in Salzburg: he stepped in at the 73rd minute. Although Valencia lost (the score was 0:1), it rehabilitated in the following game; Silva also participated there as the first-eleven member and brought his team a goal at the 90th minute.

That season was marked with 49 matches and eight scores for the athlete; he signed a seven-year contract with the club in summer. The next year, Silva won the first trophy in his career, Copa del Rey; however, the performance in the championship was a failure.

Further on, David successfully won the UEFA European Championship. Many fans and experts expected him to transfer to another club, but instead, the sportsman had a new agreement with Valencia.

The first season brought an ankle injury and long recovery. Silva returned six months later and triumphed: he scored two goals against Atletico Madrid and brought his club the victory. He participated in 25 games of the season as well. 2009/2010 was the most fruitful season: 40 matches and ten scores.

Silva debuted on August 14, 2010, against Tottenham. Josep Guardiola allowed the newcomer to join the first eleven and stay in the field for all 90 minutes, but both opponents failed to score. The next month, Silva celebrated his first goal at the eighth minute; interestingly, Red Bull Salzburg was his team’s opponent, just like it happened when David debuted in Valencia.

Guardiola used the midfielder’s talent to the fullest during the first two seasons: he had 102 games and 14 goals. Besides, Silva was good at the World Cup 2012 qualifying matches and helped his team win the UEFA European Championship.

The athlete’s earnings increased from £130 000 to £190 000 per week. Speaking about his extended contract with Manchester City, David said it was a simple decision: he wanted to spend the best years in his career in this club.

In 2017, the Portuguese halfback Bernardo Silva joined the Citizens; he had played in Monaco before. Bernardo mentioned in his interviews that David Silva was his icon; he was looking forward to their collaboration.

David Silva is not married. He has been dating Yessica Suárez González for several years; their son Mateo was born in December 2017. The boy was born three months earlier, and doctors were struggling for his life for five months. Silva missed several matches to take care of his family.

Kevin De Bruyne devoted his goal to Silva; when the team won, they took a picture in a locker room and posted it on Instagram with words of support for David.

Earlier, the midfielder had his head shaven, and fans suspected he had cancer. Later, the athlete denied the rumors and explained that he had been absent for a while due to the problems with his son. In May 2018, the child was released from a hospital.

The sportsman participated in FIFA World Cup 2018 and appeared in all four matches for the national team, playing until the end mostly. However, he did not score or assist. On July 29, Silva announced the end of his career in the national team: the family became the priority for him.

In summer 2019, the midfielder revealed his plans to leave Manchester City after the 2019-2020 season.