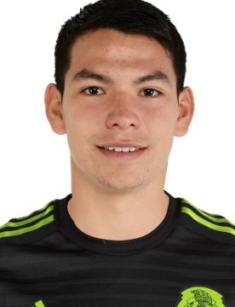 Hirving Lozano is a Mexican soccer player who often becomes the center of public attention after matches: the sportsman is talented and hot-tempered. Lozano’s hothead nature often makes him violate rules and even settle disputes with other players; at the same time, coaches and teammates forgive him because the man’s results in the field are splendid.

Hirving Rodrigo Lozano Bahena was born on July 30, 1995, in Mexico City, Mexico. Before the boy was born, his parents lived in Guatemala, but the country had to face a severe financial crisis in 1993. According to the media, Hirving’s father was indirectly responsible for that and decided to leave farther from angry citizens. Thus, the Lozano family found a new home in Mexico, and their son was born soon.

The future soccer celebrity got his name thanks to his father’s fondness of Star Wars: the man named his son after the director Irvin Kershner, the creator of the fifth part of the fantastic saga. However, there was a misprint in the papers, and the letter “h” appeared. The parents decided to leave it be.

Hirving was looking up to his brother Jose who was a year older. The family viewed the eldest son as the leader and key hope, so Hirving remained in the shadows for a long time. Of course, the boy wanted to be like Jose. This is how he appeared in the soccer field: the brother was a promising athlete, one of the best in his state.

However, the young man never missed an opportunity to play tricks on his teammates or adults. One day, he poured hot sauce on his coach. The prank was not forgiven: Jose was kicked out of the team, and the whole state knew about that. The young man decided to quit soccer; rumors have it he is a shark hunter today.

Soon after the incident, Hirving shrugged and began to train hard; he reached as much success as his brother. A casual observer noticed the seven-year-old boy playing skillfully, and coaches started talking about the talented child. Hirving joined the legendary club Pachuca.

In 2014, Lozano debuted in the club officially. The first match was challenging: Pachuca met with Club América, one of the most popular teams in Mexico. Opponents did not take the thin boy seriously until he scored the only goal in the battle. Since that time, Lozano’s career has been developing rapidly.

The funny nickname “Chucky” came from his childhood. The boy was as mischievous as his brother and played tricks on youth team members. For example, he liked to hide under a bed in a dark room and suddenly jump out. Soon, mates compared him to Chucky the doll from Don Mancini’s horror. The nickname stuck to Lozano since then.

Fans and opponents cannot but follow every movement of Lozano in the field. As a youth team player, he often became a champion and best attacker.

In 2016, Chucky’s brilliant playing brought Pachuca the long-awaited Liga MX. The next year, the athlete received the CONCACAF Men's Olympic Qualifying Championship Golden Ball, and his club won the tournament. Besides, in 2016, Hirving joined the national team and even participated in the Olympic Games in Rio de Janeiro; Mexico had to face Germany, Fiji, and South Korea.

In 2017, the sportsman signed a six-year contract with the Dutch club PSV Eindhoven and showed his talent in the very first match, scoring a goal. Following games were also successful, and Hirving and his team enjoyed the victory in Eredivisie at the end of the season. The same year, Lozano participated in Confederation Cup in Russia and stood against Portuguese, German, and Russian teams.

Experts talk about Hirving’s sports talent enthusiastically and promise the young man a great career. In their turn, coaches hope that Lozano would become a calmer person and stop picking fights in the field.

There is no information about Hirving Lozano’s private life. He never shows off about his relationships or posts photos on Instagram and other social networks that could give a clue about his girlfriend.

In 2018, there were rumors about Lozano’s transfer to the British club Everton. However, the athlete dispelled doubts and told journalists he was not going to do so in the nearest future. The upcoming event in Russia, FIFA World Cup, occupied his mind. In June 2018, Lozano’s father gave a hint that Barcelona was pretty interested in the athlete.

Today, Hirving continues to play for PSV. In spring 2019, he had an injury and missed some events.