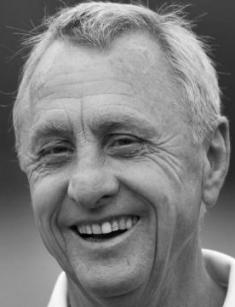 One of the greatest soccer players of the 20th century, Johan Cruyff became famous for his performance in Ajax and the Netherlands national team. Besides, he used to be the coach of legendary Barcelona.

The sportsman received three the Ballon d'Or awards and European Cup; he transformed the soccer philosophy and was included in World Soccer’s The Greatest Players of the 20th Century. As a coach, the Dutch influenced many respectable mentors, such as Arrigo Sacchi, Arsène Wenger, Pep Guardiola, and Eric Cantona, and brought many clubs to the triumph.

Hendrik Johannes Cruijff was born in the capital of the Netherlands on April 25, 1947. His parents owned a grocery store and lived five minutes of walk from the home stadium of Ajax.

The father, Hermanus Cornelis Cruijff, was a fan of the capital team and helped his children, Hendrik and Henny, enter the baseball school supported by the local soccer club. Little Cruyff was close to his father, and his death of a heart attack in 1959 proved to be a severe blow for the boy.

The mother, Petronella Bernarda Draaijer, tried to help go through the dark period; she was always there to support her son and his sports interests. Soon after her husband died, the woman closed the family business and got hired as a cleaner at De Meer Stadion. The widow met a field worker of Ajax and married again to provide her kids with everything.

The stepfather gave a useful recommendation to 15-year-old Johan: to switch from baseball to soccer. The teenager kept training for two years and developed all the necessary skills and speed. At the end of 1964, the club administration allowed Cruyff to play in the adult team.

As soon as Johan joined Ajax, the club immediately took the leading positions in the national championship. In the season 1965/1966, the young forward scored 25 goals in 23 matches and brought the victory to his team. The same triumph happened later: the athlete was actively attacking his opponents and leading Ajax to new horizons.

The sportsman kept the happy number 14 on his uniform in the national team. In 1974, the Netherlands enjoyed the silver medal at FIFA World Cup; two years later, the bronze medal at UEFA European Championship followed. The international success was not limited by the national team: Johan won three European Champion Clubs’ Cups, UEFA Super Cup, and Intercontinental Cup.

Cruyff’s style implied a total control over a ball, partners, and field. The athlete identified most favorable situations and taught other forwards and defenders how to feel soccer geometry and architecture. In the final game of FIFA World Cup 1974, West Germany could not handle the fast attacker; only the goalkeeper Sepp Maier touched the ball during the first half.

Despite his ordinary physical shapes and sizes (the man’s height was 5.84 feet or 178 cm., and his weight was 172 lbs. or 78 kg.), the player’s analytical mind and ability to read the game were outstanding. Today, experts believe that the Croatian midfielder Luka Modrić has similar qualities; besides, he bears some resemblance to young Cruyff.

Johan’s speed and techniques remain legendary. He could run 30 meters for 3.8 seconds; as a result, he was well aware of each players’ position in the field and could use his colleagues’ strengths to their fullest. Cruyff became the team’s leader soon and won Ballon d'Or in 1971. Moreover, the athlete became the only member of the Amsterdam club whose victorious number 14 was permanent.

European clubs were impressed by Johan’s talent and dreamed of having him. In 1973, Barcelona bought the player for $2 million – it was an incredible sum at that time. Cruyff helped the Catalonian team won La Liga; the club’s speed, flexibility, and confidence increased. The sportsman won Copa del Rey and Dutch Sportsman of the Year as a Barcelona member.

In 1978, Cruyff considered finishing his career, but financial troubles caused by some unsuccessful investment made him think about a contract with Los Angeles Aztecs. For some reason, the sportsman did not settle in the USA and came back to Europe to join Levante.

In 1981, Johan returned to Ajax and made the club the KNVB Cup. Everybody was disappointed by the news that the administration did not extend the contract, and Cruyff finished his career in Feyenoord that won Eredivisie and KNVB Cup in 1983-1984.

Still, the Amsterdam club could not part from the legendary forward. In 1985, Johan became its coach and brought his mentees to UEFA Cup Winners’ Cup; besides, Ajax became number two at Eredivisie.

Cruyff gave the Catalonians the victory-oriented ideology and mindset they use today. The coach’s successors adopted the tiki-taka playing system and taught the youth according to Johan’s traditions at the La Masia sports school. One can read about the legendary soccer star’s methods and coach career in the biography Johan Cruyff, génie pop et despote by Ghemmour, Chérif.

Cruyff was a one-person man. He fell in love with Danny Coster, the daughter of a Dutch businessman; they had met at the wedding of Johan’s teammate and married in 1968. The wife’s father became the player’s agent; according to some sources, he contributed to Johan’s transfer to Barcelona.

The forward and his wife lived in Spain; their happiness lasted for 50 years. The woman accompanied Johan everywhere and gave birth to three children. One day, the family had to overcome an armed robbery: the athlete did not go to the 1978 FIFA World Cup, and the kids went outside only with the police.

Johan was fond of golf and collecting cars. In 1979, Cruyff and his close friend, the Italian designer Emidio Lazzarini, presented a sports shoe line that turned from casual to glamor quickly.

The famous player’s lifestyle was far from being healthy. He had begun smoking early and had to quit after a double bypass in 1991.

Nevertheless, smoking had already done its destructive job: Cruyff was diagnosed with lung cancer in 2015. The media learned the news, and hundreds of articles full of empathy followed. Johan thanked his colleagues and fans but provided no further details.

In 2016, it was revealed that chemo helped the man reduce symptoms. Cruyff appeared at Formula One car testing on March 2. It was his last public appearance.

Two weeks later, the former soccer player felt worse; he could not speak and had to lie only on his left. Doctors did everything they could, but Cruyff died on March 24, 2016, among his relatives. Lung cancer and brain metastasis were the cause of death.

In 1996, Johan Cruyff Arena was opened in Amsterdam in honor of the sportsman. Today, all home matches of Ajax are held there.

Johan Cruyff’s net worth was $4 million by the moment of his death.