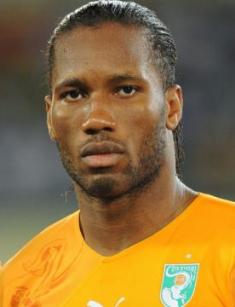 Didier Drogba is a unique footballer who managed to stop the civil war, achieved unprecedented success for the African player, one of the best strikers in world football. Didier Drogba is a leader, a father figure with a difficult life, a man who has distinguished himself not only with his brilliant playing on the field but also his public position.

Didier Yves Drogba Tébily (full name of the football player) was born on March 11 in a family of bank employees in Ivory Coast. At the age of five, the child went to France to visit his uncle, who was a player for a little-know local football club. Nevertheless, the man belonged to professional athletes and instilled in his nephew a love for football and developed his talents.

The striker feels gratitude towards his uncle, who devoted much time to the talented young man. Didier believes that he owes everything he has achieved in his career to uncle Michel.

Three years later, the boy began missing his family and returned to his hometown. Soon, however, an economic crisis erupted in Ivory Coast, the parents lost their jobs in the bank, and the family lived on air. Like many immigrants, they moved to France.

In 1993, the family settled in a suburb of Paris, where Drogba began to play for the local youth club. Soon, the parents discovered that the sport distracted his son from school, where the careless student repeated a year. They put their foot down up, and the boy stopped training for a while. Having pulled up his grades, Didier joined the semi-professional club Levallois. On the advice of uncle Michel, the footballer changed the initial position of a midfielder to a striker.

Failing to impress the head coach, the striker rarely went on the field. However, when he had an opportunity to play, Drogba scored a goal against an opponent quickly. It is not surprising that more significant clubs became interested in the talented footballer.

After graduating from school, the young man moved to Le Mans, where he entered university to study accountancy. There, the striker began training at Ligue 2 club, Le Mans. Daily exhausting training turned out to be difficult for the football player, Drogba got used to the schedule for a long time. He got numerous injuries during the first two years in the club, and the striker broke his leg four times.

Soon, the young athlete realized that it was time to start a career, or he would have little chance of becoming a professional footballer. Didier made his debut in the Le Mans first team, and in 1999 he signed the first contract. In the first season, tall Drogba (the footballer is 6.2 ft. (189 cm) tall, weighing 200.62 lbs. (91 kg)) scored seven goals against his opponents in 30 games.

In 2002, the Ivorian player moved to Guingamp. The striker helped the team to finish seventh in the Ligue 1, which was a record league finish. He became the third-highest goalscorer of the tournament.

The brilliant results were noticed by agents of the country's leading clubs. In 2003, the footballer transferred to Olympique de Marseille, where he had one successful season. The athlete won the UNFP Player of the Year award and was compared with Jean-Pierre Papin.

In 2004, Drogba moved to Chelsea. The transfer fee was € 38 million. According to the striker, but for the salary and the profitable contract, he would have stayed at Marseille, the place where his heart belonged. However, the proposal of The Blues was a hard to refuse offer.

Didier became a world-famous striker, experienced career ups and earned recognition, playing for the English club. In 2012, the Ivorian player scored the 100th goal for the team, becoming the first African player to reach that landmark. In 2012, Didier Drogba also helped The Blues to win the UEFA Champions League for the first time, defeating Bayern Munich in the final.

After the victory, there were rumors about the transfer of the striker to Barcelona. By the way, the previous matches against Barça were very emotional for the Blues. So, in 2009, Drogba’s attack on the referee after the game against the Catalans threatened to turn into a fight. Chelsea footballers were outraged by the referee’s acts and the unassigned penalty. As a result, the English club did not win the Champions League.

The striker dispelled the rumors officially declaring that they did not hold negotiations with Barcelona; nevertheless, he would leave the English club when his contract expired.

In 2012, the forward moved to the Chinese club Shanghai Shenhua as a free agent. Then, in 2013, the striker went to Turkey, playing for Galatasaray. In 2014, he played for his former club, Chelsea, for one season. In 2015, the athlete moved to Canada, where he became a member of the Montreal Impact team.

In addition to a club career, Drogba has achieved great heights, which were unprecedented for an African football player. In 2002, the striker made his debut for the Ivory Coast national team. In 2005, the team qualified for the FIFA World Cup. Then Drogba did one of the most important things in his life. He recorded a video message, in which a soccer player on his knees asked the rebels to lay down their arms and stop the civil war in his homeland. The efforts of the striker were successful, people heard the plea, and further participation of Drogba in the process ended with a ceasefire in 2007.

Drogba met his wife Lalla, a Malian woman, in the French capital in the 90s. Then the young football player was starting his career at Le Mans, and the girl tried her hand at modeling business. The wife of the striker grew up in a family where they knew firsthand about football. Lalla's father played on the football fields of the country in the 70s. The woman is well aware of the sports and is happy to attend her husband's matches.

According to Didier Drogba, his wife supported him when he was thinking about changing his profession, and she has remained the striker’s best friend throughout the years.

Lalla is an artist; her paintings have been exhibited in Mali, Senegal, Ivory Coast, France, and England. However, unlike some famous wives of football players, Diakité does not like public attention and tries to live in the shadow. The photos of Didier’s wife rarely appear in the press or on his Instagram page.

Drogba has three children: two sons and a daughter. The oldest son planned to follow in his father's footsteps and made his first steps in football at Chelsea Academy, after which he joined the club's youth team.

The couple married only in 2011 in Monaco. The newlyweds invited relatives and close friends to the ceremony. The owner of Chelsea, Roman Abramovich, gave them a gift, having organized the wedding.

The family does charity work; they created the Didier Drogba Foundation. The organization invests in medicine and education, the construction of hospitals in the homeland of the football player, as well as in other African countries.

In 2007, the football player was appointed by the United Nations Development Programme as a Goodwill Ambassador. In 2011, the striker was honored with Humanitarian in Sport Award for his humanitarian efforts.

In 2017, the striker moved to the American club Phoenix Rising, also becoming its co-owner. In the 2017-2018 season, the forward continued to score beautiful goals against opponents. However, the player officially announced his retirement after the end of the season. Fans learned the news about the life of the idol, following his posts on Instagram and Twitter. Didier is an active user of social media and often pleases fans with photos and videos.

Drogba remains a recognized authority in the football world. During the 2018 FIFA World Cup in Russia, the striker was invited to BBC studio to comment and predict the results.

According to the striker, the Belgian team was to win the championship. The striker mentioned that the team had talented players, including his friends: Romelu Lukaku, Kevin De Bruyne, Vincent Kompany, Eden Hazard.

Didier Drogba has a net worth of $90 million.