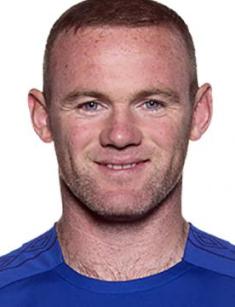 Wayne Rooney is the star of British soccer. He joined the first eleven of the national team in 2003 and became its captain in 2014. Although the sportsman was going to participate in the FIFA World Cup 2018 in Russia, he announced his retirement in 2017.

Wayne Rooney was born in Liverpool on October 24, 1985. The boy’s father, Thomas, was a laborer in a local port, and the mother, Jeanette Marie, kept the house. The family had Irish roots. Wayne became the eldest among three kids in the family; the siblings went to the same school, De La Salle.

Soccer became an integral part of Rooney’s life. The whole family supported Everton from Liverpool; Duncan Ferguson was the boy’s icon. Besides, Wayne often played soccer with his brothers in the yard.

Rooney participated in his first match at seven: he played for Western pub team and managed to score the decisive goal. As a school student, Wayne signed the contract with Everton youth team and collaborated with 19-year-old athletes when he was only 15. Coaches emphasized the teenager’s talent and natural technique.

16-year-old Rooney officially debuted in the Premier League match in 2002 but stayed on the bench for the whole time; Everton faced Southampton. In a couple of months, the sportsman was finally let in the field against Tottenham. Following the successful performance, Wayne provided himself a place in the first-eleven and turned into one of the club leaders.

Rooney scored many goals; he was conspicuous due to his strong body structure. In 2004, the player joined the national team as a forward and went to FIFA World Cup in Portugal.

Soon, rumors had it the talented sportsman felt cramped in Everton. The club immediately claimed that Rooney would be sold for no less than £50 million. The administration also offered Wayne £50 000 per week and extending the contract, but he refused.

Young Rooney was famous for his hot temper and aggression. He often had conflicts with players and referees and used foul language during matches, receiving yellow cards and being sent off the field. In the course of time, the heat of youth faded away, and the player became calmer.

On August 31, 2004, Rooney transferred to Manchester United for £27 million and received number eight in the team. In 2007, when the striker Ruud van Nistelrooy left, Wayne changed his number for ten. Overall, the athlete spent ten seasons in the club and became the Premier League winner five times. His other achievements include FA Cup and three Football League/EFL Cups.

In 2014, Rooney took the position of the captain at the national team. On September 8, 2015, the man scored the 50th goal for England during the game against Switzerland; he was named the best midfielder in the history of the club. It happened 45 years after Bobby Charlton broke the previous record and scored 49 goals.

Rooney is a hard-working and quick-analyzing athlete whose long-distance passes are always splendid. As a forward, he can also attack from the background. The soccer celebrity has won many awards; his professional achievements and high-level playing make him one of the highest-paid sportsmen today.

Before the marriage, in the early 2000s, the fiancée caught Wayne cheating. After the successful UEFA European Championship, the soccer star wanted to relax and spent several nights with a prostitute Charlotte Glover. He not only paid her but also left and autograph – this is what betrayed him.

At the end of 2004, the English media accused Rooney of an affair with 48-year-old Patricia Tierney, a brothel worker. The man did not mind their age gap. Patricia confirmed she was acquainted with the sportsman but denied having sex with him.

After the scandal, Wayne confessed he was fond of brothels and massage parlors, especially in his youth. He said he was sorry for his behavior and hoped on Coleen’s and fans’ support.

The first year of the marriage was peaceful and calm. In 2009, the escort Jenny Thompson revealed her long relationship with the sportsman. According to the woman, he often spent nights with her when Coleen was pregnant with the first child; she received £1000 per night. Once again, Rooney’s wife found the courage to forgive her husband and stayed with him.

In September 2017, pregnant Coleen left the house when Wayne was drunk-driving with a prostitute. According to The Daily Mail, the woman and the kids were on vacation in Majorca. When the press began to discuss the scandal, she immediately returned home, collected her belongings, and moved to her parents’ house with the sons.

The sources close to the family claimed that it was the last straw, and the situation was intolerable in the family. However, the spouses did not break up.

An anonymous source reported that the children were Coleen’s priority, and she needed to restore the family for the sake of financial stability.

Rooney has collaborated with many famous brands: Nokia, Ford, Nike, and Coca-Cola; one could see him on the cover of the FIFA game four times. In 2010, after the cheating scandal, Coca-Cola canceled the contract and excluded the athlete from its campaign.

Apart from his sexual scandals, Wayne is known for casino failures: he wasted about €600 000 during one night in June 2017.

In February 2018, the fourth boy, Cass Mac, was born. Several days after his birth, Wayne shared a picture with his kids on Instagram and wrote:

In August 2017, the sportsman announced he left the international sports. On August 23, fans could see the good-bye post and grateful words for the national team.

Thus, Rooney did not participate in the FIFA World Cup 2018 in Russia. According to the forward, there were many talents in the team who could bring victory to the country. In July 2017, he returned to Everton and signed a contract for two years. The new transfer took place in 2018: the athlete joined D.C. United.