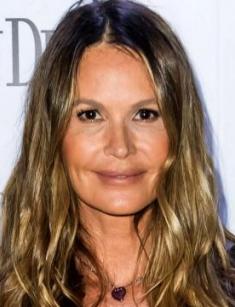 Elle Macpherson is a vibrant Australian top model, actress, and designer. She proves to be a professional in any sphere that she tries herself in. The woman manages to star on the cover of influential and prestigious glossy magazines, act in movies and television shows, and share her secrets to healthy eating, style, and inner and outer beauty with her admirers. Now Elle is not only a first-class model, designer, and a serious business-lady but also a wonderful mother of two sons.

Eleanor Mcpherson was born on March 29, 1963, in a small Australian town Killara of New South Wales. The future top model was a freedom-loving child; her parents did not limit her freedom in any way. In one of the interviews, Elle admitted that the streets partially raised her. The thing is that when the girl was born, her mother was seventeen and back then she was still almost a child.

Little Macpherson spent a lot of time with the neighborhood kids who lived on the same street as her. The girl almost did not play with dolls. Though she cycled a lot, wearing boys clothes.

From a young age, the girl stood out from her peers because she was too tall and had an athletic body type. For this reason, during her school years, classmates did not see her as a potential object for fancying but treated her as a friend. At that time, the future model did not consider herself feminine. However, she was never a Tomboy either.

In her youth, Elle devoted a lot of time to swimming — she woke up every day at half-past five in the morning and went to the pool before the classes. She also actively engaged in netball (a popular sport in Australia), often went to the ocean with friends to go water skiing and kayaking or windsurfing. At the same time, her hobbies did not prevent the girl from doing well at school.

As an ordinary schoolgirl, she wanted to devote her life to studying law, so without any problems, she enrolled in the best University of Sydney at the faculty of law.

Going on vacation on a trip, Elle attracted the attention of an influential scout of one of the modeling agencies. He invited the young woman to move to New York to try her hand in the fashion industry. Macpherson did not believe the scout's words, as she always considered herself an unsuitable candidate for photoshoots and catwalks, and even more so for the status of "cover girl."

However, her mother took the agent's offer as very tempting and intriguing, so she advised her daughter to go to New York at least for a few weeks to look at the metropolis, which everyone dreams about.

Almost immediately after the arrival, Macpherson signed a contract, which the Click agency offered her. The employees instantly showed the girl that she was not only attractive but also very talented, so Elle decided to start building a modeling career. Her body measurements were perfect for it - at the height of 6 feet, she weighed 134 pounds.

The first couple of years of creative activity, Macpherson was not as rich and colorful as in subsequent years, she could not book new projects, especially worthy and highly paid. The black stripe continued until the moment when the girl met a promising photographer named Gilles Bensimon, who worked closely with the fashionable glossy edition of Elle.

Thanks to this fateful meeting photos of the aspiring model began to be published in the famous magazine. A friendly relationship with the man turned into an affair and then into an official marriage.

At this point, Elle Macpherson gradually began to turn into a wanted and successful model, actively starred for a well-known Elle, the image of the girl in a swimsuit adorned the cover of the famous glossy magazine for men Sports Illustrated six times. Besides, her photos more than once appeared on the pages of other popular media.

After parting with Gilles professional biography of the beauty was in crisis — Elle magazine instantly terminated the contract with the model. Her face was much less likely to appear in glossy magazines, and new projects from fashion houses came less and less, so Elle decided to search for new and more suitable activity urgently.

The model began with a video recording of her training, in which she told about all the secrets of preserving such a toned and slender body. These exercise sets, as well as her diet, even today keeps helping Elle and other women in the fight with excessive weight, and the pursuit of a youthful and fresh look.

A large number of photos made by paparazzi (although, sometimes, not in a perfect moment, for example, when Elle was without any makeup), as well as Elle's posts on Instagram, are evidence of this.

In addition to filming the accessible training, Macpherson was engaged in the release of her calendar, which, like the video, was incredibly successful. After that, the celebrity did not suffer because of a small failure in the modeling business, because she managed to send the creative energy in the right direction and did not miss the chance to attract new fans without losing the old ones.

Elle Macpherson managed to leave her mark in history not only as a successful top model and designer but also as a talented actress. For the first time, she played a small and familiar role of a model at the age of 27. It happened when she worked with the cult director Woody Allen in a comedy-drama Alice. Then she began to take part in more serious work - in the drama film Sirens starring Hugh Grant in the title role, in the fantasy movie Batman & Robin in which she got into the character of Julie Madison.

One of the most striking and memorable projects in celebrity's filmography was the legendary sitcom Friends. The audience was delighted with her character — an Australian dancer named Janine Lacroix. And in 2001 St Macpherson played a significant role in movie South Kensington together with Rupert Everett and Sienna Miller.

In 1984, Macpherson met with the famous photographer Gilles Bensimon. Despite the 20-year age difference, the man began to take care of the model and give her attention and gifts from the day that they met. A year later, the young beauty said "yes" to him, and the happy lovers made a vow. However, this creative couple did not last long; in 1990, they decided to separate.

Five years later, Elle met an influential businessman named Arpad Busson and accepted his marriage proposal at once. In 1998, the couple had their first son Flynn, and in 2003 — the second child, who was uniquely named Aurelius Cy Andrea Busson. The public considered their close-knit family unbreakable and predicted love for life, but fate decided otherwise — in 2005, Arpad and Elle officially got divorced.

Elle Macpherson's last husband to date was billionaire Jeffrey Soffer, with whom she became engaged in July 2013. Spouses dreamed of children together; however, owing to the rather mature age, the woman didn't manage to get pregnant in any way in a natural way. Perhaps this was the reason for the divorce, which took place in 2017.

Elle Macpherson has a net worth of $95 million. In 2019, the woman took up the Wellness industry. Together with the London nutritionist Simone Laubscher, she developed a high-quality formula Dietary Supplement powder, the Super Elixir, which must be diluted in water and consumed daily.

According to the model, Wellness helps her to keep healthy and elastic skin, slim body, and youth.