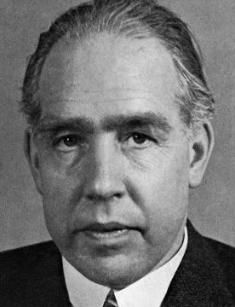 Niels Bohr is one of the creators of modern physics. In 1922, the Danish scientist was honored with the Nobel Prize; more than 20 academies gladly provided him with their membership cards.

Bohr is the father of the quantum theory who worked on the fundaments of quantum mechanics. It is hard to overestimate the importance of his work on atomic reactions. Besides, Niels Bohr is known as a philosopher who was looking for answers in the physical world. He was involved in atomic bomb development and realized how dangerous this discovery was; the scientist was fighting for the banning of the deadly weapon till his last days.

Niels Henrik David Bohr was born in the capital of Denmark in late fall 1885. The future researcher’s family was connected with science: the father, Christian Bohr, was a candidate for the Nobel Prize for his medical and physiological discoveries. Besides, he was a professor at the University of Copenhagen.

The mother, Ellen Adler Bohr, was the daughter of the Parliament member and banker David Adler and Jenny Raphael from a powerful Jewish banking dynasty. Niels had two siblings; there are many photos of the family where the scientist is a little boy.

The Bohrs were respectable in the banking, political, and cultural circles. Ellen and Christian were educated and sociable people; they often invited guests, so Niels grew up among the local intelligentsia. He witnessed many exciting discussions, philosophical arguments, and talks about recent discoveries.

As a school student, Niels Bohr was fond of sciences and philosophy. It could not have been otherwise: the theologist and philosopher Harald Høffding and the physicist Christian Christiansen.

Niels and his brother Harald, who became a prolific mathematician later, also liked soccer and performed for the city club. Niels was a goalkeeper, and Harald took the position of a midfielder. Besides, young Bohr loved to ski and sail.

In 1903, Niels Henrik David joined the same fraternity as his father. The oldest university of Denmark was a favorable ground for the young talent: he studied physics, mathematics, chemistry, and astronomy there.

In 1907, Bohr’s name was associated with perfect academic knowledge; teachers promised him a great future, and the young man’s final paper on water surface tension received a gold medal from the Royal Danish Academy of Sciences and Letters. Two years later, Niels earned his Master’s degree. Colleagues viewed his doctorate thesis as an etalon and the threshold of remarkable discoveries. The young scientist was describing electron behavior and magnetic waves in metals when he revealed some gaps in the classical electrodynamics.

In 1911, the young man became a Doctor of Science and received a scholarship as an intern. Bohr went to Cambridge; he dreamed of working under the Nobel Prize winner J. J. Thomson at the legendary Cavendish Laboratory. However, Thomson was not particularly interested in Niels’s thesis – he was occupied with something else.

Bohr felt disappointed but met another Nobel Laureate, Ernest Rutherford. The “father” of nuclear physics worked at the University of Manchester, north-west Britain, and the Danish scientist left Cambridge. At the beginning of 1912, he threw himself in the development of a nuclear atomic model and studied radioactivity in elements.

The cooperation with Rutherford inspired Bohr to create his own atomic model. In summer 1912, he returned to Copenhagen and joined his alma mater as an assistant professor. It took him two years to solve the problems pertaining to the atomic model and its quantum structure theory.

The physicist presented his ideas in 1913. He used some assumptions to explain the optical series of hydrogen and quantum nature of light. Bohr’s work marked the beginning of quantum physics development; Ernest Rutherford and Albert Einstein appreciated his contribution. The latter even called his professional intuition genius.

In spring 1914, the Danish physicist was invited to teach in Manchester; he delivered lectures on mathematical physics there. Two years later, the man came back to his home country and continued to study the atom structure; the university made Bohr a professor.

In 1920, the famous physicist founded Institute of Theoretical Physics in Copenhagen; he remained its leader until his death. The institute contributed to the development of quantum mechanics heavily. In the 1920s, Bohr’s atomic model was replaced by a more complicated one; the research of Niels’s students served as its ground.

In 1922, the scientist was awarded the Nobel Prize for his achievements in atomic structure studies. Soon, the master presented the fundaments of quantum mechanics: the correspondence principle and complementarity.

In the 1930s, Bohr started his research in nuclear physics and presented the liquid-drop model that implied its dividing. This discovery allowed scientists to take a significant step forward; it was vital before the Second World War. Bohr found out that uranium-235 was capable of splitting and releasing incredible amounts of energy. This is where an atomic bomb started.

Before the war, the scientist continued to work in the Nazi-occupied territory, but his “half-Jewish” background and the warning about an arrest made him flee to Sweden and, later, Great Britain. Bohr believed that it was impossible to create an atomic bomb, but the United States started working in this direction. The USA asked the scientist for assistance, and Niels went there with his son Aage to participate in the Manhattan Project.

At the end of the war, the hardened scientist was anxious that such a destructive and deadly power could be used as a weapon. He met with the President Franklin D. Roosevelt and the British Prime Minister Winston Churchill to persuade them to control the arms race; however, the attempt was futile.

In 1955, 70-year-old Bohr was supposed to resign. He left the position of the professor but remained the head of his institute and continued to develop quantum physics. At the end of his life, the scientist was also interested in molecular biology.

The fundamental book Atomic Physics and Human Knowledge was published a year before the scientist’s death. He frequently told the press that atomic energy should be used only for peaceful purposes and warned about the danger of the atomic weapons. In 1950, the man signed a letter to the UN and encouraged the international community to control it. Seven years later, Bohr became the first laureate of the Atoms for Peace Award.

Colleagues loved Niels for his humanism and perfect sense of humor. The institute employees were like family, and Bohr was sincerely interested in his employees’ lives. The famous scientist did not view himself as a star, even though he could be proud of his numerous prizes: the Nobel Prize, degrees in Cambridge, Manchester, Oxford, Edinburgh, Sorbonne, Princeton, Harvard, and so on.

In summer 1912, Niels Bohr married the sister of his best friend in the institute. Margrethe Nørlund made an excellent wife for her husband and provided him with stability and support. The couple had six children, one of which, Aage, followed in his father’s footsteps. His achievements in physics were just as impressive as his dad’s: the scientist won the Nobel Prize in the middle of the 1970s.

In the early 1930s, the beer company Carlsberg gave Bohr an honorary residence built for him personally. Elizabeth II and other world leaders and celebrities visited the physicist.

In 1934, the man had to face a tragedy: his 19-year-old son, Christian, was washed away from a yacht during a storm. His body was never found.

Ernest Rutherford was not only a colleague for Niels: he was like a father. The scientists’ families were good friends.

Bohr’s biographers mark that his religious views formed at the age of 16. Although he denied religious dogmas, Niels’s attitude toward God was adoring. He is known for the quote: “Einstein, stop telling God what to do!”

At the end of his life, the physicist wrote articles on philosophical topics, did social work, and delivered lectures. Bohr died at 77. The urn with his ashes was placed to the family grave in Copenhagen.