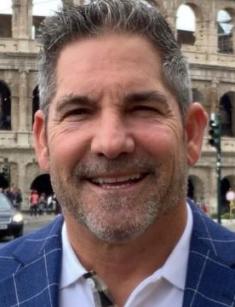 Grant Cardone is a businessman and writer, the author of the bestsellers and influential expert in the sphere of SEO international company. He founded the first online university for the sellers, where they are taught how to sell goods and services effectively, how to promote them, and achieve success in this as well.

Grant was born on the 21st of March, 1958 in Lake Charles and was the fourth child in the family of many children. The businessman has a twin brother.

Having graduated from the school and having received the degree, Grant entered the McNeese University, where he received the bachelor's degree in Accounting.

The young man was interested in the possibility of getting a profit from the age of fifteen. Together with his father, he visited property objects for sale. Alongside they thought about the possible income from the sale of such property. Grant saved love for this type of business until the present time.

Already then, the teenager was conscious of the fact that the understanding of the market and practical experience could result in the material well-being and wealth. Grant preferred the real cases to the theories from the textbooks.

At the age of 29, Grant purchased his first property: it was a single-family facility based in Houston. At first, rent bore the costs, though it didn’t last for a long time. The young man was looking for new renters. When he had a bad experience, Cardone sold his unsuccessful pursue because he considered it an unprofitable variant for his investment.

A few years later, while he made savings and was working on his base of the real estate, the businessman carried out his first apartment deal. After he had sold 38 facilities in San Diego, the entrepreneur bought the property, which was worth $1.9 million. He made a minimum fee, and already in a month, he became the owner of the second complex.

Step by step, Grant bought the property, the cost of which was in a short time estimated at $350 million. Real estate agencies which were organized by Cardone were situated several states, and by 2012 Grant had bought five more apartment complexes.

Being experienced in investments, the owner of Cardone Acquisitions had most of the company's shares and also received support from the banks. It turned out that Grant became the estate magnate. The entrepreneur began to be considered the professional of sales.

Cardone shared his secrets of success and gave tips for people in business in the books. His works got to the bestsellers. His books under the titles Sell or Be Sold, and If You're Not First, You're Last.

The rules of business described by the author are suitable for the beginners and people in business who burned out, sales managers and brokers. His book The 10X Rule: The Only Difference Between Success and Failure became the motivational book for them. The bibliography of the entrepreneur with time was supplemented by eight books, which got their audience as the guide to action.

Cordone often mentions the quotes from his books in the interviews, giving examples of the situations in his biography. Cardone's success helped him to become an authoritative businessman and social media personality. Grant hosted the show King Of Change, in which he performed as the coach for the owners of the small companies.

Grant Cardone got acquainted with his future wife Elena Lyons on the movie set. The businessman didn't manage to attract the attention of the beauty, which encouraged him as a sales manager. Moreover, the man believed that he had met the girl of his dreams.

Grant spent a year using his sales methodology to attract his future spouse. He has a happy personal life and thinks that his wife's consent to get married to him is the greatest deal in his life. Two children were born in their family. Grant adores his daughters.

The businessman has a personal Instagram account, where he regularly publishes family photos, as well as business posts with educating and motivating information. Grant handles his profiles in the social on his own.

In 2019, the businessman became the speaker at Synergy Global Forum, which took place in St. Petersburg. The entrepreneur gives interviews quite often, takes part in training on business development and continues his literary activity.