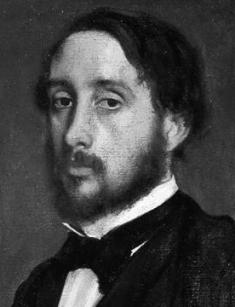 Perfectionist, reaching in his works to a disarming harmony of shapes and colors, Hilaire-Germain-Edgar De Gas is known to the world as a bright representative of the impressionist movement. It is impossible to assign the weightlessness and grace that he showed to the world to one particular branch of art.

The future artist was born on July 19, 1834, in the family of a successful banker. His father, Augustin De Gas, was the organizer of a Neapolitan fashion house at home. Célestine Musson De Gas, his mother, was the daughter of a cotton broker.

The head of the family supported his wife and children, and Célestine, as the keeper of the hearth, maintained the comfort and order of the house. The mother died suddenly when the boy was only 12.

Edgar was growing up a smart kid: he became interested in Latin and history. After graduating in 1852 from the Lycée Louis-le-Grand, the young man entered the University of Paris at the Faculty of Law. However, the young man understood that law was not the thing he was passionate about.

Augustin wanted his eldest son to get an education and follow in his footsteps, inheriting the family business in the future. Learning of his son's intention to leave University, he decided not to dominate the offspring, giving Edgar a choice.

Having received the blessing of his father, in 1855, the young man entered the École des Beaux-Arts, where the mentor Louis Lamothe instilled a love for the leader of European academism Jean-Auguste-Dominique Ingres in the young man.

Edgar was lucky to be born into a family of aristocrats. The guy never experienced difficulties connected with a shortage of money. While other aspiring artists struggled with hunger and looked apprehensively into the future, the young man in 1856 decided to leave school and go to Spain for two years.

There the young man studied the main cultural centers of the country – Florence, Naples, Rome, inspired by the paintings of Renaissance masters.

Inspired, the young man opened a workshop on his return to Paris, creating several works on historical subjects.

Edgar boldly refused the idealization of ancient life, showing what it could turn into with a modern twist. Despite the enormous efforts and a great desire, Degas did not succeed in combining classical and contemporary times in his creative works.

The acquaintance with Édouard Manet, which happened in 1862, turned the life of Degas upside down. The artist became a regular of the cozy Café Guerbois. There, ambitious Impressionists discussed the concept of new subjects in painting and their vision of reality.

Under the influence of 1860, he created a series of significant works, The Laundry Woman, Race Horses, Ballet Rehearsal on the Stage. The main task of the artist was to show the inner world of the character, in the look, in the movement of the hand, in the turn of the head. The painter wanted to show the depths of the personality without giving away too much. Degas was fundamentally different from the Impressionists; he perceived the world as a dynamic element of being, not trying to isolate from it but to find inspiration in it. Edgar saw the ideal in the untiring life of the metropolis. Photographic memory helped to notice the most hidden spots of Paris.

In the future, these memories helped to convey the rhythm of urban life, creating detailed images of people, places, and events.

Financial stability allowed Edgar to remain in eternal search of himself. The painter violated the canons, experimented with light, form, mocked the composition – in general, did everything possible and impossible for the new vision to create the effect of freshness in his works.

As a result of creative wandering, the painter managed to achieve uniqueness of the compositional structure of paintings, which were no longer random. All elements emphasized the meaning of the plot.

Ballet was a favorite theme of the impressionist. The popularity of ballet scenes captured by Degas is easy to explain: on his canvases, the artist skillfully shows the world of beauty and grace, without overloading the paintings with excessive sentimentality.

The theme of the ballet appears in the works of many artists. For painting, all his cotemporaries used the services of famous models. The game of chiaroscuro, a pose, specially developed for portrait painting – these details deprived the artworks of the soul. Degas first dared to show the workers without glamorizing their lives.

The painting Blue Dancers is written with the artist's favorite pastel. Four ballerinas in blue dancing outfits are all fidgeting in anticipation of going on stage. Every day they play the role, and every day, they are anxious as though it was their first night. Looking at them, the viewer empathizes with the characters, feeling the same jitters. The asymmetry of the composition and the uneven edges of the painting demonstrates the artist's passion for photography.

In addition to ballet, the painter was fond of horses. These graceful animals won the love of the creator when he was in Italy. Degas was a fan of traditional Roman racing. The natural flexibility of horses attracted Degas, and professional gestures of riders caused genuine delight in the artist.

The first picture of the cycle "horse racing" was created in 1860 and was called At the Races, Gentlemen Jockeys. This canvas is the reflection of the style and character of the artist.

Indistinct, blurry riders are lost against the flat landscape. Degas repainted this work 20 years later. In the later version, the background was endless hills and factories.

The work of Edgar Degas The Absinthe Drinker, raising the problem of alcoholism, fully reflects the manners of Parisian Bohemians of the time. The feeling of loneliness is better to experience together. The loss of hope is what unites these distant and at the same time, close people. The faded color of the picture reinforces the feeling of insignificance of one's being.

The painter did not want to glamorize reality, allowing the viewer to see the facts that surround him firsthand.

One of the significant works of the 19th century is Place de la Concorde. At some point, the master had no money left, and he had to take up the action of any kind. The master was forced to portray a Viscount's family, and then sell the painting to him. This helped the artist to get the amount of money necessary for life. The picture remained in the hand of L. Lepik for a long time. Its fate was unknown until the early 20th century.

After a time, the Place de la Concorde was found in the collection of the eminent owner of the art gallery Paul Durand-Ruel. However, the lower part of the work was cut off. It contained the artist's autograph. The absence of a signature complicated the determination of authorship. After many futile attempts to sell the masterpiece, finally, it was purchased by the German O. Gerstenberg.

The plot of the work is prosaic. Despite the seeming calmness of the pale colors and smooth lines, the thought does not lie on the surface. Children and adults in the picture look in different directions. There is an eternal conflict between fathers and children. The reflected difference in views and attitudes of generations got the mocking name Place de la Concorde.

Degas was able to surprise the viewer, causing empathy with the characters depicted on the canvas. Women Ironing were no exception. A worker with a bottle of wine, exhausted from boredom and monotony, became a symbol of the early twentieth century workers.

The exhaustion of the second woman is immediately evident. She doesn't do the ironing – she falls off her feet. She has neither the strength nor the will to lift her head. All around her is the same hopelessness and piles of laundry. The Maestro of impressionism allows people to see Paris from a different angle.

Laundry Girls are harsh and realistic. The great master treated the man of physical work with a sense of deep humanism.

In the painting Dancing Class, Degas phenomenally combines accurate drawing with sketch details. The artist focuses on the expressions of the dancers. The picture plunges into an atmosphere of exciting anticipation. For the students, it is a tedious waiting, for the elderly choreographer – a palette of new ideas. But the born ballerinas have no time for other thoughts – they live by dancing, and a second of idleness is killing them. Classic colors give the canvas an academic style. However, the energy of passive motion in space brings the viewer into the world of impressionism.

People who do not know the biography of Degas, briefly acquainted with his work, consider that Edgar had many love affairs with models. Images of naked women often appeared on the canvases of the colorist, but it is known that the master did not have a close relationship with any of the muses.

The lover of wide-brimmed hats, with eyes that reflected the sadness of the world, preferred proud solitude to noisy companies. The unsociable artist could not bear the increased attention to his person.

Because of his estranged lifestyle and his habit of muttering under his breath, his friends and family affectionately called him "teddy bear."

Being a freedom-loving man, the painter had a negative attitude towards marriage. According to biographers, the melancholic perfectionist did not need physical intimacy. The sculptor felt love through his eyes and enjoyed looking at the female body.

Suzanne Valadon, who posed for the painter a lot said: Degas always complimented her appearance, but physical contact was impossible. The genius of impressionism believed that a woman was not created for love, but inspiration. The admiration was purely spiritual.

It is noteworthy that even after the publication of a series of works in, dedicated to prostitutes, no one for a split second doubted the purity of the master.

The only acceptable state of the creator's soul was solitude. He had deliberately chosen it as his faithful companion.

The last years of Degas's life were infinitely sad. The blind genius who wandered through the streets of Paris was swallowed up by a bitter pessimism. It was indescribably painful to him that he no longer had the opportunity to contemplate life, the movement of which he imprinted with his magic brush.

It is known that Degas did not tolerate chatter. So when he was still alive, he asked Forain to forget eulogies and say a simple, straightforward phrase: