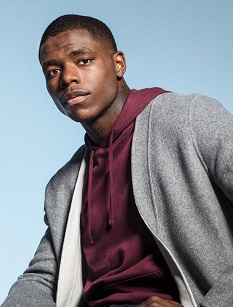 Gordon is a very scandalous personality. In his 7-year career, he has been mixed up with lots of controversial issues related to his drug and alcohol addictions. Nowadays, he is still playing but there are rumors he will soon leave sport. Is it the truth? It’s high time you became aware of all the facts of Gordon’s biography!

Josh Gordon’s birthplace is Texas – he was raised in the family of Herald and his wife named Elaine alongside two sisters. As for Gordon’s nationality, he has Haitian roots.

As a school student, Gordon dedicated time to various kinds of sport, including tennis and football. In his junior year, he made 21 passes for 370 yards – an astonishing result. In his last year, the sportsman scored 30 receptions for 540 yards and registered ten touchdowns.

So, Gordon was a really successful player grabbing attention from many different universities – lots of educational establishments offered him to join them. Having enrolled at a college, he had law problems. Being a sophomore, he alongside his close pal and teammate fell asleep at a local park. Police found them and discovered drugs in pockets of their clothes. As a result, Gordon’s friend was expelled from the squad while he himself was punished by a long suspension. In 2011 he was ruled out for some time again after failing a marijuana test.

In 2012 future sports star decided to take part in the draft. There the Cleveland Browns noticed his skills and offered the sportsman join them. The latter agreed and concluded a $6 million deal with the team in summer 2012.

In his debut season with the Browns, Gordon made 49 catches, 799 yards and six touchdowns in total. The match with the New York Giants brought Gordon his debut touchdown ever. In Week 14 Gordon’s squad faced the Oakland Raiders – it was his debut 100-yard fight. The following game against the Dallas Cowboys was marked by the high stats – Gordon made nine catches.

In summer 2013 Gordon was ruled out for several months because of ‘inappropriate behavior.’ So, in sum, he appeared only in 15 matches that year and scored 1,700 receiving yards.

The season 2014 was a controversial one for the player. So, in July he was charged with drunk driving. And his law problems didn’t end there. One month later, the team’s management decided to remove him from playing again because of his rude behavior towards teammates. According to their initial decision, Gordon could get back to playing only the following year. However, in autumn, managers changed their mind and reduced his punishment for eight matches. Subsequently, the player returned to field in November.

At the end of the year, Gordon was removed from playing one more time. Totally, he took part in only six matches that year and made 25 passed for 310 yards.

Gordon missed the whole 2015 season being suspended one more time. As a part of his suspension, Gordon had to enter a special program aimed to stop him from drinking alcohol and consuming drugs.

The sportsman could return to the Browns only in July 2016. However, he decided not to start playing but pay attention to his health and enter a rehabilitation program to get rid of his addiction.

Fans could see Gordon playing again only in November 2017. His first match after a long absence was against the team Washington Redskins. Fighting against the opposers, Gordon scored 90 receiving yards. Nevertheless, the Browns were beaten with a 20-11 score. Having faced the Green Bay Packers the following week, the sportsman made a touchdown – the first one since the year 2013.

The following season, Josh Gordon took part in one match only. The rumors appeared the Browns wanted to get rid of him – and the news happened to be the truth. When the team’s authorities were asked about the reason for this decision, they said they were fed up with Gordon’s horrible behavior and violation team’s rules.

In autumn of 2018, Gordon was transmitted to a new franchise – the Patriots (where Tom Brady is playing). In his debut match with the squad, the player made three passes for 29 yards and brought his new team a 40-11 victory.

The following week, fighting against the Kansas City Chiefs, Josh Gordon made six receptions for 45 yards. In total, the year was closed with 41 receptions for 718 yards. At the end of the season, Gordon claimed he would retire from sports to concentrate on his health. However, he appeared in the season 2019. As for today, there are gossips Gordon will soon become a free agent.

According to the site ‘RotoWorld’, Josh Gordon’s net worth is evaluated at $5 million.

Christina Lockhart is Gordon’s ex-girlfriend and mother of his kid – a daughter named Emma who was given birth in May 2015. At the moment of Emma’s birth, the partners had already broken up. Initially, Josh had not admitted he was the girl’s biological father until a special test proved his fatherhood.

As for the relationship between Gordon and Lockhart, they prefer not to tell about it. The two seem to hate each other.

Earlier, the sportsman had been romantically linked with Jenna Shea.

Gordon has a big tattoo on his back.