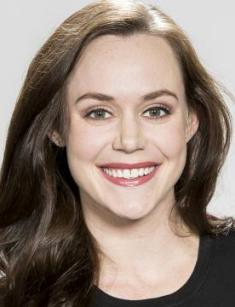 Only the best get the opportunity to do the honors of carrying their country's flag. For Canada, these people were Tessa Virtue and Scott Moir. In ice dancing, athletes won an Olympic gold medal in Vancouver and two silver medals at the Winter Olympics in Sochi.

Multiple Champions and prize-winners of national, European and world tournaments returned to the ice-rink after a yearly time-out and again proved their star status: at the Olympics in Pyeongchang, the pair won the second gold medal for the country in team competitions, justifying the trust of millions of fans.

The future dancer on ice was born in May 1989 in Canadian London. Tessa is the youngest child in the Virtue family. At the time of her birth, two brothers and a sister were growing up. Her parents, Jim and Kate, had nothing to do with sports. But the girl's brothers became her first coaches: keen on hockey, they listened to the requests of the younger sister and "put" her on skates.

The first motivation of Tessa Virtue to learn to ice-skate was a desire to keep up with peers, who were pretty good on the ice-rink. The dream to become a champion came later, when the passion for dancing on the ice turned into a matter of life.

The sports biography of the young Canadian was determined when at the ice-skating rink 7-year-old Tessa Virtue met a boy, two years older than her, whose name was Scott Moir. According to the couple, the "chemistry" between them did not arise immediately: at first, the guys were shy to hold hands, talked a little and were timid near each other. But the coaches thought the pair was cute and funny, and they looked good together because of the same height.

Mutual understanding and friendship in the relationship between Tessa and Scott appeared after ten years. Later they were called the most stable pair in the world of figure skating.

Tessa Virtue learned how to be flexible and mastered her skills not only at the ice-rink: the girl studied ballet and modern choreography at the Errington Graham school. After an audition, the 9-year-old Canadian was accepted to a ballet school in Toronto.

In 2003, when Tessa Virtue was thirteen years old, she moved to America. In Canton, Michigan, Tessa did her training under the guidance of Marina Zoueva and Igor Shpilband.

Having started skating in pairs in 1997, Tessa and Scott won their first awards in the early 2000s. In 2001-2002 they got bronze awards in the national championship (children's level), and in 2003 Virtue and Moir took the 7th place in the National Championship, but this time among juniors.

In the 2003/04 season, young Canadians made their debut in the Junior Grand Prix. Their performance in Croatia brought the 4th place, and in Slovakia, the dancers took only the 6th place. At the national championship, Tessa Virtue and her partner won the first gold in their sports career and got to the Junior world championship. At the world level, they got the 11th place.

Next season was marked with the transition into the adult category and the performances in the new status at the national and international competitions. In the Grand Prix stage in China, Virtue and Moir were in the lead, in France they got a silver medal. The victories opened the doors for the athletes to debut at the national championship at the adult level in 2005.

In 2006, the Canadians made a splash at the Grand Prix, winning first prizes awards in two stages and the final games.

At the home championship, the pair won bronze and topped the list of the Canadian reserve team for the Olympic Games. In the same year, 2006, Tessa Virtue together with her partner performed at the continental competition, where they got 3rd place. But at the Junior World Cup, the Canadians won gold and became the first of the compatriots with the championship title.

In the 2006/07 season, Tessa Virtue and her constant partner made their debut at the international games in the adult category. In November 2007, at the second stage of Grand Prix in Quebec, Virtue and Moir won a silver medal in the Pepsi Coliseum arena, but in Paris, the arena of Bercy sports complex, the Canadian figure skaters managed to win only the 4th place.

At the first adult World Cup in Tokyo, where the compulsory program included Rumba, the Canadians came to the 6th place.

The following season, the pair earned the right to represent the country at the continental games in South Korea. Then Tessa Virtue and her partner made the triumph and got the main award. The pair also stayed on top in Sweden. In Gothenburg, the dancers showed great skill and talent in the free skating program. Hundreds of thousands of fans who were unable to come to the skating-rink saw the video clip with Virtue and Moir performing to the soundtrack of The Umbrellas of Cherbourg movie.

The 2008/09 season was unlucky for the couple. Virtue's trauma and the subsequent operation did not allow to participate in two stages of the Grand Prix, but after rehabilitation, the skaters became winners of the national championship for the second time.

In 2010, the Canadians were honored with a 3rd national title, but the main prize – the Olympic gold eclipsed all former wins of Tessa Virtue and her partner. In Vancouver, skaters shone, having received arbitrary speech for the highest score. The first Olympic Games of the pair were crowned with triumph. For debutants, it was the peak of dreams and the highest award.

The World Championships followed the Olympics in Turin, where the athletes beat their own record and won gold in the Palavela arena.

A painful fall followed the brilliant victory: Tessa Virtue was diagnosed with compartment syndrome; in other words, swelling of arms and legs. The problem arose because of the tight training schedule that the skater had to cope with in the past season. The problematic operation on her feet led to a forced pause in training, but at the World Cup in Russia, the couple managed to win a silver medal.

Tessa Virtue returned to sports two years after the games in Sochi, from where they brought home two silver medals.

In 2016, the Canadians perfectly started the pre-Olympic season, winning gold in Montreal. They got the main prize at the Federation Cup. In Sapporo, at the final stage of the Cup, the dancers were again in the lead. The finals in Marseille were triumphant.

The start of the pre-Olympic season for Tessa Virtue and her partner took place in January 2017 in Ottawa. Here, and in February and South Korea, the dancers won gold. In Finland, where the World Cup took place, the couple got the main reward again.

The skaters began the Olympic season at the home arena and continued to win in Osaka. Everywhere they won gold medals and the right to represent the country in Pyeongchang.

The Canadian star is not married. The girl continues training in the Canton, but her main residence is in London.

A long collaboration with Scott Moir pushed the fans of the couple to the idea that skaters act like a couple not only on the ice-rink. And the photos of the athletes in wedding dresses only gave way to the rumors. In reality, Tessa and Scott are old and good friends, and they didn't have a wedding.

The partners in ice dancing wrote an autobiographical book in collaboration with Steve Milton and became the main characters of a documentary. They speak with incredible warmth about each other and claim that their mutual understanding only grows with the years. Tessa and Scott have been skating together for 20 years.

On Instagram, Tessa Virtue's subscribers can see dozens of joint photos of the figure skaters as well as pictures from her childhood.

At the opening ceremony of the Games in Pyeongchang, the Canadian skaters were given the honors of carrying the national flag. The responsible and honorable mission required a commitment that they were willing to give.

On February 12, the Canadian couple brilliantly performed to the soundtrack from the musical Moulin Rouge! and won over the strongest teams from the United States and Russia.

The free program had to be changed in the last moment, removing an ambiguous and spicy element. After critical remarks of inappropriateness, Virtue, and Moir agreed to change the dance piece.

Taking a classic Paris cabaret as a basis of their dance, Tess and Scott convinced coaches, Patrice Lauzon, and Marie-France Dubreuil, that it was the right choice. The remarkable results proved that the Olympic Champions were right.