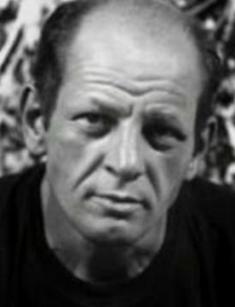 Jackson Pollock is an American artist, a representative of the abstract expressionist movement of the 20th century, known for his unique style of drip painting. The famous master left a rich cultural heritage which is kept in private collections and exhibited at the leading museums of modern art.

Paul Jackson Pollock was born on January 29, 1912, in the American city of Cody, Wyoming, in a large Presbyterian family of Stella May and LeRoy Pollock. The father of the future artist was a farmer and land surveyor, and his mother was a weaver, following her family tradition.

Little Jackson and his brothers moved first to Arizona and then to California. In his youth, Pollock was interested in the culture of Native Americans, traveling with his father around the country.

In 1928, after an unsuccessful attempt to pursue a military career, the young man entered Los Angeles' Manual Arts High School, where he became acquainted with abstraction and occultism. Jackson did not study at the school for a long time, and he was expelled for alcohol abuse and poor behavior.

In 1930, following his elder brother Charles Pollock, he moved to New York City and studied under Thomas Hart Benton at the Art Students League. Jackson had little interest in the rural subject matter of the teacher, but the use of paint and his independence left an imprint on the work of the future painter.

Inspired by the work of Mexican muralist David Alfaro Siqueiros, Pollock began working in an experimental workshop in New York City, where he mastered the technique of using liquid paint, which became the hallmark of the master. From 1938 to 1942, Jackson participated in the WPA Federal Art Project, while undergoing a course of treatment for alcoholism.

During rehabilitation, Dr. Joseph Henderson, a follower of Carl Jung’s analytical psychology, encouraged the artist’s zeal and made the painting process a part of therapy. The influence of this method was expressed in the artist’s works of that time, such as The Moon Woman and The She-Wolf, created in 1942 and 1943.

The master created the most famous paintings in the "drip period" between 1947 and 1950. At this time, the artist was influenced by the works of Thomas Hart Benton, Pablo Picasso, and Joan Miró. He began to use alkyd enamels, synthetic resin-based paints, instead of traditional artist's paints. Jackson used hardened brushes, sticks, and basting syringes as applicators.

Imitating the process of creating Indian sand paintings, Pollock laid the canvases on the floor to move around quickly. The technique of creating abstractions did not include random shapes and colors, and the artist had a clear idea of how he wanted this or that piece to appear. Flinging, dripping, pouring and spattering, Jackson energetically moved around the canvas, almost as if in a dance, and did not stop until he got what he wanted to see. Harold Rosenberg called this technique “action painting."

In 1950, a young reporter, Hans Namuth, took a photo of Pollock, who was creating a picture. A sensational series of photographs was published in Art News magazine. He wanted a person to perceive the work as pure painting; Jackson abandoned the titles and began numbering his works using neutral numbers that did not make people search for an artistic conception.

The canvas No. 5, 1948 was first shown at Pollock’s exhibition at the Betty Parsons Gallery. He painted it using liquid paints of gray, brown, white, and yellow colors, and people perceived it as a bird's nest. In 2006, it was sold for a record amount of $140 million and became one of the most expensive paintings by the American expressionist.

In 2015, the picture Number 17A broke the previous record and was sold to investor and philanthropist Kenneth C. Griffin for $ 200 million.

At the peak of his fame, Pollock sharply refused the drip technique, being sure of its failure. He invented a new painting technique combining abstraction and surrealism. The artist created paintings on unprimed canvases, which made a rather gloomy impression. Admirers and collectors did not appreciate the change of the artist’s style. During his lifetime, a single work from his “'Black pouring” collection was not sold.

In 1952, Pollock returned to using color. He moved to the Sidney Janis Gallery, where he created the pictures Easter and the Totem and Ocean Greyness, which revived the interest of connoisseurs in abstract art. One of Pollock’s most famous works was the painting Blue Poles, titled initially Number 11, 1952.

In 1973, this canvas (212.1 cm × 488.9 cm (83.5 in × 192.5)) was bought by the National Gallery of Australia. This purchase elicited a great deal of public discussion. It was considered unreasonably expensive (Australian $ 1.3 million), but over time it became the most popular exhibit at the Gallery.

At the end of his life, the artist experimented with structures made of wire, gauze, and plaster, which had textured surfaces. So, he abandoned painting. For the last year of his life, Pollock did not draw a single picture. The last paintings by Jackson were the canvases Scent and Search, created in 1955.

In 1942, abstract artist Lee Krasner became interested in Pollock's paintings at one of the exhibitions. She visited the artist’s workshop, wanting to get to know the work and its creator more closely.

Three years later, in October 1945, Jackson and Lee got married and settled in Springs, on the outskirts of East Hampton. They bought a wooden house with a barn, where Pollock organized a workshop. Krasner worked in the bedroom on the second floor of the building. During the early years of marriage, the young people spent a lot of time together, in their free time they were engaged in gardening and cooking, and often had parties for colleagues and friends. The couple did not have children.

The wife became the artist's faithful and loving life partner, who quitted her career and suffered from her husband's drinking periods and aggression. She considered Jackson to be a brilliant master; Lee tried to improve his career, organized exhibitions, met collectors. It was she who introduced Pollock to Peggy Guggenheim, the creator of the famous Museum of Modern Art, who became the organizer of the first exhibition of the American expressionist.

Krasner helped her husband when he was on the verge of the precipice, drinking alcohol during periods of depression; the woman fed him, took care of his appearance, and organized his personal life in every possible way. All efforts were in vain. Pollock found another woman, Ruth Kligman, and Krasner left her husband.

After the divorce in 1956, Pollock became even more addicted to alcohol. The breakup with his wife caused attacks of aggression, and the artist unleashed his frustrations on his mistress. After three weeks of living together, Jackson drove Ruth out of his home in Springs and was left alone.

The artist had a tough time after the breakup with Krasner and the separation from Kligman. He retired into a shell and became gloomy. On August 11, 1956, Ruth came to the artist for a weekend with her friend Edith and invited him to a party, trying to improve relations.

Pollock drove under the influence of alcohol and lost control on the next turn. His Oldsmobile was run off the road and overturned. Only Klingman, who was thrown out of the car, survived in the accident. Jackson died after hitting a nearby tree.

The Impressionist was buried in Springs, Green River Cemetery. There is a large boulder with a commemorative plaque on his grave.

Lee Krasner took care of managing the property of the artist and ensured that Pollock's reputation remained strong.

In 2000, the movie Pollock was released and dedicated to the biography of the expressionist. Ed Harris and Marcia Gay Harden played the leading roles in the film.

An interesting fact is that earlier the Hollywood directors planned to shoot another film about the artist’s life, based on the memories of his friends. Robert De Niro, whose parents were friends with Jackson, and Barbra Streisand were to portray the characters of Pollock and Krasner.

Jackson Pollock had a net worth equal to $5 million at the time of his death.