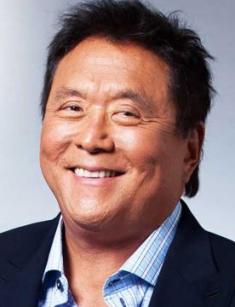 According to the philosophy of American businessman and writer Robert Kiyosaki, a person can be either the owner of the money or their slave. Judging by the multi-million dollar state of the investor, he is doing well with the first part of the statement.

Robert Kiyosaki is Japanese by blood. Four generations of millionaire ancestors lived in the United States. Robert was born in April 1947 in Hawaii. His mother, Marjorie O., worked as a nurse. Ralph H., his father, had a Ph. D. studied in Chigaco University, as well as in Stanford, and served as State Secretary of Education.

Of course, their son went to the best school in the state. There Kiyosaki met a boy named Mike, whose father instilled the knack for business in Robert. This man at the age of 13 left school and went to work, eventually becoming one of the wealthiest Hawaiians.

Kiyosaki graduated from high school in Great Neck, New York. After graduation, the young man did not want to leave the business capital of the United States and turned his eyes to the merchant marine Academy. In 1969, the graduate of the Academy got a job on an oil vessel of Standard Oil of California (since 2005 it is called Chevron). Robert traveled the seas and oceans for three months.

Then Kiyosaki abruptly changed his life and joined the Marine Corps of the U.S. army. As a combat helicopter pilot, Robert participated in the Vietnam war, was discharged from the military only in 1973. For his bravery in service, he got awarded an Air Medal.

The next step in Robert's biography was a business course at the University of Hawaii. But the future investor did not stay there, because he did not want to waste time on a silly theory. After taking a short course in investing, Kiyosaki worked as a sales agent for Xerox for three years. Having saved up a starting budget in 1977, Kiyosaki found his own company – manufacturer of leather and nylon. This business did not bring a lot of money but turned into a significant experience of earning them.

In the early ' 80s, on the wave of popularity of rock music, Robert was engaged in the licensed production of t-shirts for rockers, at the same time playing on the stock exchange, the funds that they received were invested in real estate. However, there is no specified information about the companies that he invested in.

Unfortunately, this venture failed too. At one point, Kiyosaki even lost the house and ended up owing creditors nearly $1 million. As the businessman's wife Kim recalls, the hardest times of their lives were the days of the year 1985. They had no money and were forced to sleep in the car or stay with their friends.

The success story of billionaire Robert Kiyosaki began, oddly enough, with complete bankruptcy. After analyzing the mistakes, Robert concluded that they are typical for any businessman. At that time, already married Kiyosaki together with his wife Kim decided to share their secrets and thoughts with people. As a result, the ambitious couple opened the first school of financial literacy, which for ten years taught the basics of business management. Selling the company later, the couple secured a comfortable life.

The first was replaced by the international educational company Rich Dad's Organization. As part of this business, the Kiyosaki couple launched a vigorous teaching activity, coupled with the spread of the fruits of the writer's work.

Key achievements in education "by Kiyosaki" should include the concept of cashflow quadrant and interpretation of assets and liability, different from the ideas of classical accounting.

However, it should be noted that Kiyosaki's experience of investing in specific areas – oil, gas, securities, and real estate – is not quoted in serious financial circles. By and large, Robert Kiyosaki is a pioneer in making money in the info business.

Robert himself had already become so selective in matters of profit that he earned a substantial capital and allowed himself not to work. By this, Kiyosaki does not mean idleness, but the absence of the need to make a living. In other words, financial freedom is being able to quit your job if you don't want to do it anymore.

But the businessman did not abandon the educational path – he writes books, two of them - in collaboration with Donald Trump.

Robert Kiyosaki's most famous work, Rich Dad Poor Dad, has long been a bestseller in financial administration. It is hard to imagine, but at first, no shop wanted to buy the book, Kiyosaki sold it where he could.

The prototype of "poor dad" was Robert's father. While his son was in the army, Kiyosaki Sr. ran for Lieutenant Governor of Hawaii, lost, and quit his job. Then he bought a franchise restaurant but went bankrupt. But "rich dad" is a generalized image of people who have achieved success, including Robert Kiyosaki, their experience, achievements.

In the book Who Took My Money? Robert explains how and why it is necessary to increase the level of financial self-education. In Rich Dad's Success Stories, the author cited stories of people who took advantage of his advice and guidance.

The main idea of the businessman's books is not only to make money but also that, even if you fail, you need to find the strength to stand up and continue.

In November 1986, Robert married Kim. At the beginning of her career, she worked as a manager in an advertising magazine. Then Kim switched to the management of women's clothing trade. In 1989, she started investing big – bought a house in Portland and began to rent.

The future millionaires met in Honolulu through their friend Karen. At the same time, Karen had dated Robert eight years earlier. Kim refused to date the guy for six months, not being sure that her close friend did not have feelings for Kiyosaki.

At first, Kiyosaki looked at the appearance of his future wife. The first date took place in the best restaurant in Honolulu and then turned into a night walk on the beach with a bottle of champagne. Kim later admitted that thanks to this plan, Robert immediately won her over.

When the couple began to communicate closer, it turned out that Kim was a smart woman. The wife supported Robert in all endeavors, participated in the work of her husband's educational company, bravely endured painful periods in life. According to Kiyosaki, his wife turned out to be a much more successful and competent investor than himself.

Kim Kiyosaki wrote a manual on investing, Rich Woman: A Book on Investing for Women, guided by the fact that in money matters, men and women behave differently-depending on traditions, perception of others, the psychology and their emotions. Kim emphasizes that financial independence is essential for women (by the way, Mrs. Kiyosaki earned the lion's share of her millions on independent projects).

The couple lives in Bisbee (Arizona); they travel a lot. Robert shares the photos from the trips on his Instagram account.

In 2016, Robert Kiyosaki became a guest speaker of the Russian forum of Investment and Export. The investor predicted an increase in the FRC rate in January 2017, and as a result, the weakening of currencies.

Besides, Kiyosaki announced sensational news that confused everyone: the businessman withdrew capital from the property and invested $300 million in insurance.

No rating can answer the question about the size of Robert Kiyosaki's fortune. And all because there is no such surname. Estimates of his net worth range from $80 million to $2.5 billion.