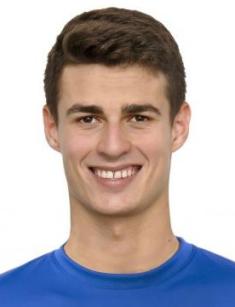 The promising Spanish goalkeeper Kepa Arrizabalaga is still too young, but he has already managed to show off his talents and make the country's fans happy with his beautiful safes. In 2018, the 23-year-old goalkeeper joined the Spanish national team and went to the World Cup to win.

The football player's full name is Kepa Arrizabalaga Revuelta. But at home, the young man's nickname is just Kepa. A sportsman was born in the provincial Spanish town of Ondarroa. From a young age, he played the ball in the yard with his peers. At the age of 10, he joined Athletic Bilbao's youth setup.

Arrizabalaga participated in a series of children's and youth tournaments as a member of the club. At the beginning of 2012, the young man began a professional football career when he joined Basconia FC.

Kepa Arrizabalaga played 12 games with Basconia. The next season he was promoted to the reserves of Bilbao Athletic, who was left without a goalkeeper who was injured. The goalkeeper had no luck in this club as he broke his hand and therefore missed the game.

In the 2014-2015 season, he played 17 matches, missing 11 goals. The young goalkeeper was sent to the second division of Ponferradina FC to gain experience. Then the home club sent the player to Valladolid for another year, where Kepa appeared in 40 games.

Valladolid's coach Gaizka Garitano wanted the talented athlete to stay for another season but got rejected. Arrizabalaga stayed at Athletic Bilbao and met the hopes of the club's owners, having excelled in several matches. The first game with Athletic took place in September 2016, when the team fought against Deportivo de La Coruña.

With Kepa as a goalkeeper, Athletic Bilbao defeated the teams of Valencia, Granada, and Seville. The injury to his right leg knocked Kepa out of the track for two months, but the young sportsman came back and made a new name for himself. In March 2017, he played in The Basque derby, defeating Real Sociedad 2-0.

Later, Arrizabalaga reacted to the powerful kick of David López in the style of another goalkeeper, the legendary José Ángel Iribar. In general, the first season in the club can be called very successful, Kepa got into the list of the best young players according to UEFA.

In the Spanish national team, the player also excelled. He made his debut for the youth team (under 19) of his native country in 2012. Kepa Arrizabalaga became the champion of Europe, appearing on the field in all matches. The fans especially remember the game with France.

Then the goalkeeper was called a hero: Kepa performed well in the penalty shootout. In the final, the Spanish team played with the Greeks, and Arrizabalaga managed to keep the goal and lead the team to victory. He made his debut as a member of the national team in the friendly game with Costa Rican players.

Kepa's dating a girl named Andrea Pérez. The footballer often posts the photos of them together on the Instagram. The couple travels and tries to spend their free time together.

The sports interests of the Spanish goalkeeper are not limited only to football. He also does not mind playing volleyball. His figure with a height of 6 ft 1 in (189 cm) and the weight of 187 lbs (84 kg) allows doing this. The list of icons includes Ronaldinho and David Beckham. Kepa is a movie fan, and he loves to watch TV series, and since his youth plays computer games.

In late autumn 2017, there were rumors in the football community that Kepa Arrizabalaga would soon move to Real Madrid. Fans were thrilled, but the news for a long time remained just a fantasy.

Andrea Pérez posted a photo on her Instagram posing in Madrid Park. The fans regarded this as a confirmation of rumors, saying that Kepa and his girlfriend were already looking at the new place of residence. A wave of questions hit Andrea, and she quickly deleted the photo.

The club was indeed negotiating to loan the talented player, but the deal was frustrated. The media have two versions of why the Spanish football player failed to move to the famous European club. Some say that the negotiations were too long, and Kepa had to extend the contract with Athletic. Others claim that the goalkeeper refused himself.

The management of his native club did not want to let him go, and they were ready to accept all the conditions of Arrizabalaga just to keep him in the team. The salary under the new contract, which was extended until 2025, increased to €2.2 million, and the number of payoffs fell by half, from €80 to 40 million. Journalists often ask Kepa if he regrets the refusal of Real Madrid. On the contrary, the sportsman says he is happy to stay in Athletic.

“It was a life decision, deciding which path to take in my career. I needed time to get together with my family and closest friends", - says Kepa. "It was a time when I needed to think things through."

In June, Kepa Arrizabalaga went to Russia for the FIFA World Cup 2018, joining forces with goalkeepers David de Gea and José Reina. Before this significant event in the football world, the young man gave cautious forecasts about the game of the national team. The goalkeeper noted that the team knew the price and was confident in its ability, but would try to avoid unnecessary risks.

Spain won the world championship only once, in 2010, the year when it was hosted by South Africa. Until then, it had not reached the final stages. Therefore, the goalkeeper noted, the national team planned to make a cautious game. Moreover, there were strongest teams on the planet among the rivals, ready to surprise.

Kepa concluded that they needed to move from stage to stage, not looking far ahead, because you can stumble.

And the Spaniards got a surprise. Having left the group (they played with Portugal and Morocco a draw and scored one goal against Iran), they lost to Russia in the playoffs in the penalty shootout. For the Spaniards, it was a real blow to the weakest team in the playoffs of the World Cup, as the Russian team was still called.

According to some sources on the Internet, Kepa Arrizabalaga has a net worth of $3 million.