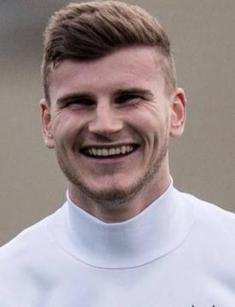 Timo Werner is a German footballer who, despite his rather young age, is already called one of the most promising players not only in Germany but also in the world. Unlike many of his teammates, Timo has a balanced character and discipline, and these qualities seem to help the sportsman to constantly develop and strive for new heights. There is no doubt that Werner's career will be brilliant.

Timo Werner was born on March 6, 1996, in Stuttgart, Germany. Timo is not the first footballer in the family. Werner's father, Günther Schuh, also was a professional football player. Since childhood, Timo has been distinguished by his balance and discipline. As a teenager, Werner even got the nickname "sober driver" as the young man did not touch the alcohol and often after noisy parties drove drunk friends home.

Werner's car was allowed to be taken by his father as a reward for his son's help in taking care of the family vineyard. In the morning Timo went to school, then helped his father, while in the evenings the young man devoted himself to training.

Later, the player confessed in an interview that even the time spent by peers on shopping and aimless dinners in cafes, Timo sat by the screen, watching videos with the best games of the world's football teams. And this determination quickly affected Werner's professional biography.

Werner started his professional career in football with the TSV Steinhaldenfeld youth club and then moved to the legendary VfB Stuttgart. The 2012/2013 season was a success for Timo Werner. He won the title of the best striker in the South/South-West division. And the young player was aready offered to spend the next season in the main line-up of the club.

Werner did not fail, and in the first weeks of the game, he sent a few goals into the gate of the rivals. For this he received several prestigious awards and prizes, each of which began with the words "the youngest." Indeed, Timo Werner's achievements impress both themselves and due to the young age of the player.

In 2016, Timo Werner signed a four-year contract with the RB Leipzig club. And in the first season played in the new line-up, Timo took off to the honorable fourth place in the list of the best strikers of the Bundesliga and was awarded the title of vice-champion of this division.

However, the young player's success was far from everyone's satisfaction, and fans of the opponents repeatedly insulted and even accused Werner of simulating injuries (in one of the matches Werner fell with his leg twisted).

A year later, Joachim Löw, coach of the German national team, noticed the talented football player. Already in March this year, Werner went on the field for the national team at number 9. The first match for the national team was not very successful. Werner was injured and had to ask for a replacement. However, soon the health of the player came to normal, and Timo again showed a decent game.

A couple of months later, Timo Werner, also a member of the national team, participated in The FIFA Confederations Cup. The match between Germany and Cameroon was the most vivid. The score closed at 3:1 in favor of the Germans, and Werner was again awarded the title of the best player in this game.

Experts and football observers separately note the manner and tactics of Timo Werner's game. The striker usually tries to beat the defenders one by one, showing impressive speed and agility.

Opponent players are not always ready for such actions, and Timo manages to break through to the opponents' gates.

The player himself emphasizes that he considers himself a new generation of strikers. According to Timo Werner, the future is up to players like him: always ready for unexpected steps, creative and confident in their own strength.

Timo Werner would never mind talking to journalists about sports successes or upcoming plans, but he prefers not to spread the word about his personal life. It is only known that some time ago the young man broke up with his beloved because of the conflict in the relationship.

Soon, there was a photo of a footballer with a new passion, a figure blonde. Werner prefers to keep the name of the girl a secret, as well as other details of the affair.

Unfortunately, even such a fighting spirit did not help the Germans to overcome the group stage of the championship. The German national team lost to the South Korean team with a score of 2-0. The 2018 FIFA World Cup for Werner and the rest of Joachim Löw's wards ended there.

Timo Werner's further plans are not yet extended. It is known that the cost of the player was already of interest to well-known clubs Bayern, Barcelona, as well as Real Madrid. In March 2018, the footballer told about two more candidates for him - the English clubs Manchester United and Liverpool.

According to Werner, he understands the need to change the club for further career development. However, Timo's final choice is not ready to make yet, and, obviously, it is not the size of the offered salary that will be decisive, but the career prospects. According to the reports on the Internet, Timo Werner's net worth is estimated at $24 million.

Surely there is only one thing we can say: the sportsman intends to do everything possible to improve the rating in the FIFA list. Fans can only follow Werner's Instagram, where he shares new photos and some details of everyday life with fans.