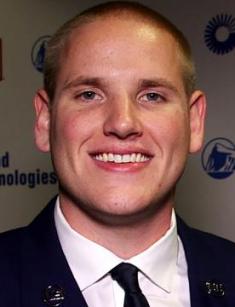 The United States Air Force Staff Sergeant, Spencer Stone, became world-famous after August 21, 2015. Stone and his friends disarmed the terrorist in the train from Amsterdam to Paris, and their life changed dramatically. The heroes were awarded the Order of the Legion of Honor and the Purple Heart, books about them were written, and a film was made.

Spencer Stone was born on August 13, 1992, in Sacramento, California, USA, in the family of Brian Stone and Joyce Eskel. He has an older brother named Everett serving in the Traffic Enforcement Unit in California and a younger sister named Kelly. Spencer became friends with Alek Skarlatos and Anthony Sadler while studying at the Freedom Christian School in Fair Oaks, California, and continued this friendship into adulthood.

All three men are described as sharing "a deeply religious background and a belief in service to their community." He preferred football, lacrosse and other team sports in Del Campo High School. Del Campo High School teacher and basketball coach Dave Nobis remembers the student as someone who was always ready to support his comrades.

After graduating from high school, Stone enlisted in the United States Air Force. He worked at the Travis Air Force base in Fairfield, California, and trained on the Azores. João Santos, Stone's trainer, described the pilot as a very nice, polite, educated, and passionate man.

In January 2015, Stone began training at the Airman Leadership School to become a non-commissioned officer. On November 1, 2016, he was promoted to the rank of staff sergeant partly due to his actions in France. After the prevention of the terrorist attack and meetings with diplomats of France and the USA, Stone became interested in the theory and practice of international relations and wanted to get higher education in this sphere.

The turning point in the officer’s life was the summer of 2015 when three friends went on a trip to Europe. When they heard a gunshot in the car of the Thalys 9364 high-speed train from Amsterdam to Paris, the guys were on alert. When the stranger with the gun opened the car door, Spencer Stone was the first to tackle him. The second one was Alek Skarlatos, a US National Guard soldier who returned from Afghanistan in July.

Their third friend, student Anthony Sadler, and Chris Norman, a 62-year-old British passenger living in southern France, former rugby player, helped the military officers. The criminal stabbed up Stone in the neck and hand with an office knife and shot one of the passengers in the neck. Despite the injury, it was Spencer who provided first aid to the victim.

The Moroccan man named Ayoub El Khazzani, carrying a Kalashnikov rifle and a Luger pistol, was knocked out after several hard blows to the head; his hands were tied, and soon the man was handed over to the police. The wounded passenger was taken by helicopter to a hospital in Lille, and the main hero, Stone, was taken to the hospital of Arras, where surgeons saved his left thumb.

Spencer was treated in hospitals in France and Germany, where his friends, as well as police officers of the counter-terrorism department, journalists and diplomats always visited him. In September, the famous pilot returned to his homeland, but after a fight with James Tran in Sacramento, he got into the hospital again, being stabbed by the California man.

A week later, his life was not in danger, and Stone left the hospital. The investigation revealed that Californian Tran was not connected with international terrorism.

It was impossible to return to the former ordinary life. Stone retired and became a public person. Now Spencer Stone lives in Sacramento and tries not to tell about his political views. People are interested in his opinion on many issues:

“People try and ask us what's the coolest things we've done, but I can name 100. It's hard to categorize them.”

In his speeches, Stone says that he “give[s] all the credit to God" and is grateful to his family, friends, the United States Air Force and Sacramento citizens. Stone, Skarlatos, and Sandler were awarded a Purple Heart by Former United States President Barack Obama. The award ceremony was held at the Pentagon.

French President François Hollande awarded the American men France's highest decoration, Knights of the Legion of Honour. But Spencer sets a higher value on the grateful people whom he managed to save than on the awards he got.

It is scary to imagine how many people could have died in the attack. More than five hundred passengers were on the train. Fortunately for everyone (except the terrorist), the brave Americans were in the right place and acted decisively. At the age of 25, Spencer Stone managed to be a pilot, hero, writer, and actor. Of course, people will hear about this man again.

Stone, Skarlatos, and Sadler appeared on Who Wants to Be a Millionaire as a part of a special "Hometown Heroes" week. Their team won $250,000. In January 2016, three friends, along with journalist Jeffrey E. Stern, began writing the book “The 15:17 to Paris”. The memoirs were published on August 23, 2016, almost a year after the train attack.

On July 11, 2017, Clint Eastwood began shooting a film based on these memoirs. At first, it was supposed to find actors that looked like Stone, Skarlatos, and Sadler, but later the director decided that it was better to cast three friends in the role of themselves. Cole Eichenberger, Paul-Mikel Williams, and Bryce Gheisar portray younger versions of Stone, Sadler, and Skarlatos. The biographical movie is scheduled to premiere in the United States on February 9, 2018.