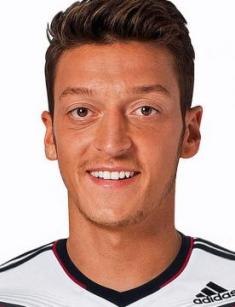 Mesut Özil is an outstanding representative of German football. The athlete of Turkish descent quickly reached career heights thanks to his talent and the father’s support, who early saw bright abilities of the boy. When Mesut began to play in the Premier League, he quickly proved his superiority having a lot of attempts on goal and providing assists.

Mesut was born in 1988 in a family of Turkish emigrants. The parents went to Germany to live a better life and settled in the town of Gelsenkirchen. The country had an industrial crisis; 70 % of migrants were unemployed or were paid a pittance for hard work.

The Özil family lived in need, barely making two ends meet. Mesut recalls that his mother had to work as a cleaner in two places, so the children hardly saw her. The family settled in an old apartment house. The boy was embarrassed by the poverty-stricken home and at school gave the bus driver another address.

Mesut was carried away by football from early childhood, kicking the ball all day long with the kids living in the neighborhood. The boy’s idol was the great football player, Zinedine Zidane, whose technique he tried to learn. The father noticed his son's passion for football, and when the child was six years old, he enrolled him in a sports school. Later, the would-be football star changed a lot of schools.

The fact is that his father Mustafa Özil believed in the talent of the son; therefore, he immediately changed the school, doubting the professionalism of a coach. Mesut managed to play for Westfalia 04 Gelsenkirchen, Teutonia Schalke-Nord, Falk Gelsenkirchen, and in 2000 he signed the first contract with Rot-Weiss Essen.

At that time, the modest youth team managed to win promotion to the 2. Bundesliga. The brilliant performance of the Turkish player was noticed by club managers, and he was showered with offers. Representatives of the Schalke 04 club tried hard, and Özil eventually became its member, starting a professional career.

At the age of 17, Mesut Özil already played for the Schalke 04 first team in the DFB-Pokal, and the team was proud of the strongest players. The newcomer did not disappoint them; he managed to replace midfielder Lincoln Cássio de Souza Soares, commonly known as Lincoln. Mesut’s diligence surprised others. He managed to play in 37 matches for two seasons. The Schalke management hoped that the talented athlete would be the heart of the team, but in 2008 he refused to sign a contract. The Turk thought that a yearly salary of € 1 million was not enough, so the club management said that they were ready to say goodbye to the player.

The famous clubs, including Arsenal, announced their interest in Mesut. During this period, the young man had a difficult choice because he was offered to play for the team from his historical homeland. But he refused, having acquired German citizenship, which created plenty of negative emotions of his compatriots.

In the end, the young man joined the ranks of the German leading football club, Werder Bremen, as a midfielder. The management paid € 4.3 million for the contract. He showed excellent abilities and excelled in matches against Bayern, which lost 2–5, and in a 1–0 win against Hoffenheim.

Mesut Özil managed to become the team leader quickly. 2009 was a happy year for Bremen because the club finished third in the Champions League, made it to the UEFA Cup (although they soon lost), won the DFB-Pokal. The next season was not so successful, but Özil joined two dozen football players who were honored to represent Germany at the FIFA World Cup.

In 2010, Mesut changed the club. At the end of August, Real Madrid bought the football player, and in the autumn he already scored the first goal for the team. That year, the team could showcase leadership, winning the Copa del Rey. Subsequently, the German midfielder significantly contributed to the champion's title of Real Madrid because the club won the Supercopa de España two tomes in tough matches thanks to his goals.

He made the next breakthrough in the football career moving to the legendary English Arsenal. The club had to pay € 45 million for Mesut Özil, and at that time the transfer made him the most expensive player in the history of football. However, the German athlete fell short of expectation in the first season. Although the team won the FA Cup, Mesut did not score many goals.

The following year, the footballer scored the winning goal against Liverpool, thereby getting another FA Cup for the team. Before this, Özil had been on vacation for a long time due to an injury, but he managed to get in good shape in a short period. It helped to defeat the reigning champion, Chelsea, and win the FA Community Shield. At the end of 2016, the Turk had the best ratio of assists per game in the history of the Premier League and was named the best Arsenal player.

Mesut Özil also played for the German national team. At the 2010 FIFA World Cup, the football player was nominated for the Golden Ball Award. Mesut helped the team finish third at the UEFA Euro 2012, win the FIFA World Cup, which took place two years later in Brazil. Although the team could not win the UEFA Euro 2016, Özil was called the best player in one of the matches.

The German footballer has always attracted the attention of women. The press discussed a long relationship with model Anna Maria Lagerblom, the sister of singer Sarah Connor. The woman even converted to Islam for her beloved man, quitted her career, and stopped appearing in revealing photoshoots, but she did not become his wife.

In the summer of 2017, they started talking about Mesut’s serious relationship with Miss Turkey 2014, model and actress Amine Gülşe. Rumors had it that the football player was finally going to say goodbye to bachelor life, but the couple has not confirmed their plans yet.

The athlete does not distinguish himself with impressive body measurements; Özil weighs only 167,55 lbs. (76 kg) with a height of 6 ft. (183 cm). The football player is known as a calm, modest, and reserved man. Mesut is very religious; he prays before every game. In addition to football, the young man's hobbies include swimming and ping pong, he loves to sing and brilliantly performs hip-hop songs.

At the end of 2017, Özil surprised fans and football representatives with unbridled appetite. The man said that the contract with Arsenal would be extended if only the club could pay € 395 thousand per week, which was an astronomical sum for members of the Premier League. Mesut was immediately accused of blackmail and even fraud, and the British experts did not consider the athlete's possible transfer to be a tragedy for the club.

However, at the beginning of 2018, the news went around the world that the Turkish player remained in Arsenal, the contract was extended for three years, and the player would be paid € 340 thousand a week. Thus, Mesut Özil became the highest-paid player in the London club.

Mesut Özil has a net worth of $50 million.