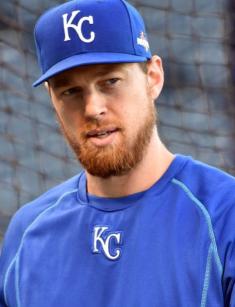 Benjamin Thomas Zobrist is an American professional baseball player performing on a second baseman and outfielder position for the Chicago Cubs of Major League Baseball (MLB) under the number 18 on his jersey. Having started playing from the infancy, the sportsman had reached high results by the current age of 37. So, let's know more about the player!

Ben Zobrist comes from Eureka, Illinois, the United States. He was born on May 26, 1981, to the family of Cynthia "Cindi" (née Cali) and Tom Zobrist, senior pastor of Liberty Bible Church in Eureka.

Zobrist became interested in basketball at an early age. When Ben was 8, he alongside his friends built their own wiffle ball field behind his house where they spent a lot of time training. In 2001 the sportsman graduated from Eureka High School. Having left the school, Zobrist planned to give up playing for the sake of education. According to his future admissions, when he was done with his last high school game, he was driving around town just thinking he was done with baseball for the rest of his life.

At school, Ben was a poet. He wrote lyrics about the emotion of winning the big game.

“The ball is going farther than ever / Much to my surprise! / The ball lands way beyond the fence. / I round the bases without shame. / The fans, they cheer and shout and scream! / For our team has won the game!”

Ben intended to enter Calvary Bible College in Kansas City, Missouri. Once he was proposed to take part in an annual summer event that showcased seniors in Peoria, Illinois. His performance was noted, and he got an offer to play college baseball at Olivet Nazarene University. Zobrist agreed and enrolled at the establishment. In 2002 the sportsman came to prominence: he was named to both the All-CCAC and All-Region VII First Teams and received NAIA Honorable Mention All-America status. As a senior, he transferred to Dallas Baptist University where also showed excellence in baseball.

In 2003 Ben Zobrist joined the Wisconsin Woodchucks of the Summer Collegiate Northwoods League. The player was named team MVP and led his team to the League Championship.

In 2004 Zobrist applied for the 2004 Major League Baseball draft. Initially, he was selected by the Houston Astros. Later, the team traded him to the Tampa Bay Rays in exchange for Aubrey Huff.

Zobrist had his first game with the Tampa on August 1, 2006. In two first seasons, he exclusively played shortstop.

Zobrist missed several matches in 2006 and 2007 years. Once he got acquainted with a batting coach nicknamed "swing mechanic" and started training under his control. Several months later, the improvements were noted by his colleagues. "He added the power component," Ray’s executive vice president Andrew Friedman said, "He became a lot more physical."

Generally, Zobrist spent the 2008 season playing on a right fielder and a back-up shortstop position. Sometimes, he or Melvin Upton Jr. (a former infielder himself) substituted a fifth infielder. The same year he succeeded to take part in the World Series. In Game 3, he faced the National League champion Philadelphia Phillies. His main position during the game was the fifth infielder.

In 2009, the Tampa Bay Rays starter Akinori Iwamura got injured, and Zobrist replaced him at the beginning of the season. That time Ben was the best in slugging percentage. For his brilliant playing, Zobrist was sent to his first All-Star Game in St. Louis in 2009. Besides, he was voted MVP of the Rays by the Tampa Bay Chapter of the Baseball Writers' Association of America.

In 2009 he got the first place in a rating of hitters.

On April 28, the Rays fought against the Minnesota Twins, and Zobrist succeeded to score eight RBIs. The same day his team faced another opposer (this match was a compensation for a previously rained out game). Totally, Ben recorded 10 RBIs for the day.

Zobrist peaked at the top of the American League in WAR with 8.8, ahead of MVP Justin Verlander and MVP runner up Jacoby Ellsbury.

In 2012 Zobrist played in total 47 games, was used on an outfielder and second baseman position. The season was closed with 20 home runs. By the way, it was his second 20-home season.

On April 8, 2013, Ben was mixed up with the strikeout on the disputed call that led to Joe Nathan's 300th career save. He closed the season with a .275 batting average, his highest result since 2009.

Zobrist's 1,000th career hit was recorded on September, 10 in the match against the New York Yankees in Yankee Stadium.

At the beginning of 2015, Ben Zobrist was traded to the Oakland Athletics alongside a colleague Yunel Escobar for John Jaso, Daniel Robertson, and Boog Powell. In April Zobrist got injured – he suffered torn medial meniscus in his left knee and was included in the 15-day disabled list. Later the doctors concluded he had to undergo a surgery. As a result, the player missed six weeks of games.

On July 28, 2015, the Rays traded Zobrist to the Kansas City Royals in exchange for Sean Manaea and Aaron Brooks. In his debut season for the club, Ben performed in 59 games and closed it with a batting average of .284, with seven home runs, 37 runs scored, and 23 RBIs.

The franchise became the champions of the AL Central Division and played the Houston Astros for the ALDS. Zobrist was a starter in all five games. Kansas City Royals defeated the Toronto Blue Jays in 5 games, got the title of American League Champions and got to the World Series. In 2015 the team beat the New York Mets in four of the five games in the World Series and became its Champions. In the postseason, Zobrist performed on a second base position. He hit .303 with 66 at-bats, 15 runs scored, 20 hits, two home runs, and 6 RBIs.

In autumn 2015 Zobrist was offered to sign a 4-year $56 million contract with the Chicago Cubs. The player accepted, and they signed a deal on December 8. Due to this decision, Ben reunited with Joe Maddon – his former manager while playing for the Tampa Bay Rays. In 2016, he batted .272/.386/.446 and led the major leagues in walks-per-strikeout at 1.17.

Totally, in 2017 Ben Zobrist succeeded to perform in 159 games, batting .232/.318/.375. The player was used on five different positions, committed only three errors, and had a fielding percentage of .991. Zobrist advanced to the final of the Gold Glove Award at second base, along with Dee Gordon and winner DJ LeMahieu.

In May 2018, a ridiculous conflict with Zobrist occurred. Zobrist posted a letter from the league office on Instagram saying the cleats he wore May 2 against Colorado violated the collective bargaining agreement. MLB says they must be at least 51 percent blue — the Cubs’ color — and warned he could be fined and disciplined if he doesn’t comply.

Zobrist wrote he has worn black cleats for day games at Wrigley Field the past two years to honor the game’s past. He said he was inspired by watching highlights of greats such as Ernie Banks and Stan Musial in the 1950s and 1960s.

Zobrist’s current net worth is evaluated at $50 million. He gets an annual salary of $14 million.

In 2002 Ben Zobrist married Julianna Joy. Julianna and Ben’s relationship began innocently, in a way that most relationships did during the early 2000s; on Instant Messenger. After several years of dates and talking and flirting, the pair officially tied the knot in 2005 during a mid-December wedding. They both wore white.

According to Julianna, it wasn’t flirting and physical attraction that made her decide to date him. Of course, she said, they were attracted to each other, but it was more than that: it was a lot of prayers and heavy leaning on her heart. She shared she loved the way that he was so thoughtful. Their conversations were always purposeful, and the woman felt safe with him. It was that way from the beginning. Of course, because they were long distance, their first real date was totally awkward. They had to learn how actually to be in the same place.

Julianna was a musician. He first brush with music came at a young age when she started taking classical piano lessons at the age of seven. She went on to pursue voice study and piano lessons in Nashville, Tennessee, working various jobs in the music industry management.

When she was 21, Julianna received a keyboard, microphone, and laptop from Ben on their wedding day and she started turning her poems into songs. Together, the couple started speaking and performing at churches, conferences, and schools, sharing a message of joy and hope in Christ with audiences nationwide.

Interestingly, the woman recorded a walk-up song specially for Ben, to encourage him for new achievements.

The couple bonded over their dedication to their faith and their hopes on raising a family together.

In 2014, while Zobrist was still playing with the Tampa Bay Rays, he and Jamie released a joint autobiography, titled Double Play: Faith and Family First. The book dealt with everything from Zobrist’s anxiety and depression after being sent to the minor leagues in 2007 as well as the incredibly personal reveal that Julianna had been sexually molested when she was just 12 years old.

The couple said that they hoped that their stories would help inspire others and show how, by sharing the deepest parts of yourself with your partner, can actually help build the foundation of a relationship.

The Zobrists had no plans to write a book initially, but were approached by B&H Publishing Group and starting working with writer Mike Yorkey on the 243-page story.

The pair are dedicated parents to their three kids, and even found a way to make time for each other. When they were married, the spouses made a pact to never be apart for more than six days at a time.

Parade labeled the Zobrists an iconic “All-American family” in 2017. But there were signs of trouble before the split: Ben took an indefinite leave of absence from the Cubs at the beginning of May 2019, and the team’s manager said Wednesday that he couldn’t predict when Ben would return to the field.

In May 2019, the sportsman filed for a divorce. Zobrist claimed in his filing that his wife has been “guilty of inappropriate marital conduct which renders further cohabitation impossible.” He stated that he was “unsure if the family can be salvaged.” Julianna deleted her Twitter and scrubbed her IG of most of their pics together. They had a home in Franklin, Tennessee.

For his perfect games’ stats, Ben Zobrist was called the World Series Most Valuable Player in 2016. He became a two-time World Series champion in consecutive seasons of 2015 with the Royals and 2016 with the Cubs.