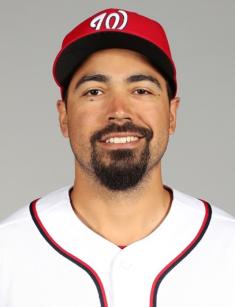 Anthony Michael Rendon is a famous baseball player who currently plays for the Los Angeles Angels in MBL. He also represented the national team at the 2019 World Series.

The future athlete was born on June 6, 1990, in Houston, Texas. There is not much information about his ancestry or early years – Rendon rarely gives interviews and talks about his childhood memories.

The boy attended George Bush High School and then continued his education at Lamar High School. He took an interest in sports at three, when he was playing with pine cones and sticks; however, the true passion for sports came when Anthony was a student. The teenager was fond of track and field, basketball, and baseball.

Soon, the young talent was noticed: as long as Rendon finished school, MBL’s club Atlanta Braves invited him to join. However, the future baseball celebrity preferred to enter the Rice University, where he gained an opportunity to collaborate with the coach Wayne Graham, known for his work with the Rice Owls.

The collegiate debut was fascinating: the first-year student harvested numerous awards, from Freshman of the Year to All-Conference USA. Moreover, Rendon was nominated for the Dick Howser Trophy and the Golden Spikes Award; he could boast 20 home runs and 72 runs batted in. An ankle injury interrupted the chain of successful performances, but the young man recovered by the next season.

In his second year, Rendon received the Dick Howser Trophy (the highest prize for a baseball player at the college level), the second Conference USA Player of the Year, and other awards. His performance was improving year by year: 26 home runs and 85 runs batted in, not counting team records. Thus, the athlete’s finished the second season with the .394 hitting.

Further on, Anthony was offered to represent America at the international circuit, but the very first match against South Korea ended with trauma; he had to take a time-out for recovery.

In 2011, the Washington Nationals selected the sportsman during the MLB draft. It was a lucky acquisition for the club – the next year, many experts named Rendon one of the most promising players not only in the team but also in the whole league.

The 2013 season brought the unusual position for the athlete – the second base, but he returned to the accustomed one the next year. This is when Anthony showed himself: 21 home runs and stealing 17 bases. He gained the first significant prize at the professional level: Silver Slugger Award, and the MLB out him to the fifth position at the list of Most Valuable Players.

At the beginning of 2015, the athlete suffered from a leg trauma and recovered several months later to find out that a newbie Yunel Escobar had replaced him at the third base. Rendon had to resume his second-base job. The success was mixed: he managed to have only five home runs due to his previous injury, but he also participated in the dramatic game between the Washington Nationals and the San Francisco Giants. Many baseball experts described the match as the most remarkable competition they ever saw.

2016 brought a come-back: Rendon regained his third-base position and took part in almost all matches of the club, winning the NL Comeback Player of the Year. In 2017, Anthony performed 25 home runs but failed to get to the All-Star Game despite the fact he had surpassed all NL players in the first half of the season. In 2018, fans saw their favorite perform 24 home runs.

Anthony’s personal life has been fortunate. He married his girlfriend, Amanda Rodriguez, after several years of dating; the wedding ceremony took place on November 25, 2017. The couple welcomed their first kid, Emma, in summer of the next year; they might have more children in the future. The athlete has made an excellent husband and dad: he adores his wife and daughter. The family lives in Washington and Houston now.

Rendon is not a public figure and has no Instagram; his latest Twitter post dates back to 2017. However, when it comes to charity, Rendon and his wife are active: they regularly attend various events and donate large sums of money. For instance, they support the Nats Youth Baseball Academy and have given them $150 000, according to the academy’s post on Twitter.

2019 became a fruitful year for the sportsman: he gained most of his prizes and celebrated glorious victories. Rendon’s stats were top, and the sportsman won the World Series against Astros, as well as got the second Silver Slugger Award and MLB RBI leader.

Fans are looking forward to his new accomplishments, but they will happen in a new team: in December 2019, the man signed the $245 million contract with LA Angels; he is going to spend at least seven years in the club.

Anthony Rendon’s net worth is estimated at $22 million in 2019. His annual salary is impressive: $18.8 million – only his colleagues Max Scherzer and Stephen Strasburg received more.