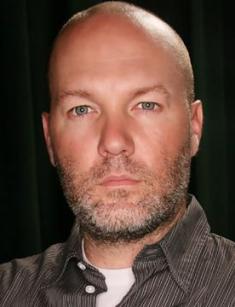 John Travolta and Fred Durst in the 2019 movie The FanaticFred Durst is the notorious vocalist of the famous American rap rock band Limp Bizkit, a director who has won the Tribeca Film Festival award.

He shocked people and colleagues with rude remarks. At the same time, he praises Russia enthusiastically and likes tattoos.

Fred Durst was born on August 20, 1970, in Jacksonville, Florida. The boy's father left the family a few weeks after the birth of the child. Fred was raised by his mother, Anita. The first years of the future celebrity’s life were hard.

Anita did not have money, a house, and a job, which forced the woman and her little son to take shelter in the church attic, eating food that the parishioners brought them. When Fred was two years old, his mother met her second husband, a policeman named Bill.

The boy took an interest in music in early childhood, often imitating the performers that his parents liked. When Fred and his brother grew up, both became fans of rock music, in particular, the band Kiss.

When it was the time for the young man to attend high school, the family moved from Jacksonville to Gastonia, North Carolina. There he had a passion for hip-hop culture. During studying, Durst even created a breakdance group called Reckless Crew. His mother significantly contributed to the bright future of the young man, presenting him a mixing console, which Fred used to mix his first tracks.

Then Durst began to participate in rap competitions. When the popularity of hip-hop culture began declining, the guy and his friends found a new hobby, skateboarding. At that time Fred's musical tastes changed to favor heavy metal music. The musician began to devote much more time not to mixing, but to writing deep, exciting lyrics.

After graduation, Fred tried his hand at entirely different spheres. Having entered Gaston College, he began to look for jobs in the fast-food industry; the man also worked as a DJ and skate trainer. However, Durst did not work there for a long time and decided to join the Navy, especially since the young man had the appropriate physical characteristics. He was 5.74 ft. (175 cm) tall, weighing not more than 154.32 lbs. (70 kg).

After the service, Fred returned to Gastonia and began writing hip-hop songs again. Then, he organized a rap duet together with a friend. The guys even recorded a promotional video, which did not help them get a recording studio contract.

Durst was upset about the failure and returned to Jacksonville, where he became a tattoo master. By the way, it was he who tattooed Korn's logo on the back of its vocalist, Brian Welch. As for Fred, since his youth, the man has covered his body with various tattoos. The most striking images are portraits of Elvis Presley and Kurt Cobain on the chest of the frontman.

The legendary band Limp Bizkit was created in 1994 when Durst met Sam Rivers, the future bass player, in a cafe. Sam invited his brother John Otto, who became a drummer, to the group. The next member was Wes Borland, and DJ Lethal joined the guys a year later.

The band's first hit was a cover of George Michael's song Faith. This composition became famous thanks to a long broadcast on MTV. The group has many hit songs, including the tender and soft single "Behind Blue Eyes," which stands apart. In addition to the main job as the frontman, Durst directed most of the Limp Bizkit music videos, and also directed some Korn videos.

Another hobby of the musician is the design of stages for the concerts during their tours. A distinctive feature of the musician was skater style clothes: baggy pants and a cap, which Durst wears now.

In the 2000s, Durst often worked with colleagues. He was one of the heroes of Eminem’s video for the single “The Real Slim Shady,” making fun of the American pop stars. The lookalikes of Pamela Anderson, Tommy Lee, Britney Spears, and others starred in the video. The musician attended the concerts of Christina Aguilera.

Durst’s career is not limited to music. Fred has also tried his hand at acting. His filmography includes bit parts in the television series House, in the project Revelations and other films.

Fred also owns a recording studio Flawless Records, a division of Geffen Records. The studio has signed contracts with many famous artists.

The musician has recently tried to realize his potential as a filmmaker. The first feature film in his filmography was The Education of Charlie Banks. The drama earned its creator the Tribeca Film Festival award for Best New York Narrative.

In 2008, the sports film The Longshots was released, telling about the first woman participating in the Pop Warner football tournament. Later, Durst had a 10-year break in his directorial career.

The musician is known as an infamous person. Provocative statements at concerts and in the press, delays and public insults of colleagues are a noninclusive list of Durst’s conflict situations.

The last straw was a three-minute sex tape featuring Durst that was leaked on the Internet. There is also an opinion that it was Fred who uploaded the video to heighten people’s interest.

He met his first wife Rachel Tergesen at the age of 20 when he served in the Navy. The newlyweds began their family life in California. They had a daughter, Adriana, but soon the marriage broke up. In the early 2000s, Jennifer Rovero became a new girlfriend of the singer. She gave birth to Durst’s son, Dallas.

The musician said in an interview that he wanted to find a wife from Russia, expressing his love for Russian traditions and cuisine. In 2009, Esther Nazarov was his wife for three months. In 2012, the singer married Kseniya Beryazina from Crimea. In early childhood, the woman and her parents moved closer to the Black Sea from the Kemerovo region. She later became a professional makeup artist and now works as a beauty blogger.

In August 2015, the singer finally established himself as a supporter of Russia and submitted documents for Russian citizenship after a conversation with Russian President Vladimir Putin. The musician planned to organize a business in Crimea related to the production of television series, which he intended to supply to the international market.

The couple did not have children for six years of marriage. In 2018, Durst announced a divorce from Kseniya. According to Fred, after the dissolution of the marriage, he will stop financing the ex-wife, although she insisted on it.

The artist's actions, as well as his posts on social media, keep shocking people. The singer’s official account on Instagram is dedicated to rare cars.

In 2018, Fred Durst began shooting the full-length movie The Fanatic. It is a thriller which shows a famous musician who is persecuted by an obsessed fan.

The script is based on the story that happened to Fred several years ago. John Travolta played the title character, a madman, who destroyed the life of his idol. The famous actor had to prepare for the role thoroughly. The film is expected to premiere in 2019.

Fred Durst has a net worth of $20 million.