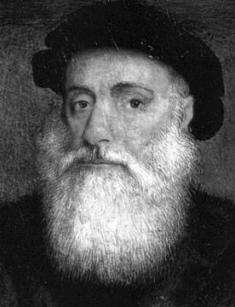 The Portuguese are proud of their compatriot, Vasco da Gama, who became the first traveler to find the marine passage to India. The famous explorer’s life was not all about discoveries, though: piracy and cynic murders were also present.

Vasco was born between 1460-1469; there is no clear information. The boy spent his childhood in Sines located on the sea coast. Da Gama came from noble blood, and his family was pretty wealthy. The father, Estêvão da Gama, felt guilty – the parents were not married when their son was born, and the baby was nothing but a bastard without the inheritance rights. Young Vasco knew he would have to make his life on his own. The father tried to compensate for it with money and provided his son with everything he wanted.

In the 15th century, bastard boys were to take monastic vows so that they would receive an adequate education. In 1480, Vasco and his brother joined the Order of Santiago and studied mathematics, astronomy, and navigation. Abraham Zacuto, the boys’ mentor, appreciated his students’ intellect and talents.

The new documentary information about Vasco da Gama’s life appeared only in 1492. French-flagged pirates attacked a Portuguese galleon that was transporting gold from Guinea to Portugal. Offended, King Manuel I ordered da Gama to capture all resting ships near the coast of France. Vasco’s operation was a success, and he became incredibly popular in his country as he came back.

The French returned everything they had pirated in exchange for the ships; the conflict was solved. The sailors who had been captured were horrified to remember the cruel Portuguese aggressor who tortured them; da Gama’s ships seemed to appear out of nowhere and performed their flash-like attacks at once.

The predecessor of Manuel I of Portugal, John II, dreamed of conquering India and even had an expedition organized, but the attempt failed. In 1497, the royal astrologist and mathematician, Abraham Zacuto, forecast that two brothers would conquer the country of spices. The king remembered the da Gama brothers’ harsh manners and appointed young Vasco the leader of the new expedition. On July 8, three military ships (São Gabriel, São Rafael, and Berrio) and a storage vessel left Lisbon.

The fleet replenished the supplies in Green Cape and passed it, heading to Africa through the Atlantic Ocean. People saw land only four months later and stayed in the island of Saint Helena. However, local tribes attacked the incomers; Vasco had a bad leg injury.

Further on, the voyagers sailed around Cape of Good Hope and restocked again; they had the damaged ship sunk. As it turned out, aborigines were wearing woven clothes and understand Arabic. Thus, it was clear: Arabia was close. The forthcoming territory was absolutely unknown.

Lack of food and severe conditions brought scurvy to many men; 50 of them died. The team rebelled and demanded to go home, but Vasco did not listen to them and arrested trouble-makers. As long as the Portuguese reached Arab merchants, the expedition turned into pirating. Da Gama fooled the Malindi sultan and took his experienced lootsmen. While the sultan and Vasco agreed to help destroy the Mombasa sheik, the traitorous commander just robbed ships and fired the coast.

An Arabiс lootsman showed the way to India, and the travelers reached the destination in May 1498. The Calicut ruler welcomed the foreigners, but Arab merchants informed him about how the Portuguese had raided and pointed out their gifts were too insignificant. Thus, the local authorities arrested about a hundred of the sailors who were walking the city. Vasco da Gama kept his wits and arrested the noble citizens who were examining the European equipment in the ship.

The leader of Calicut was afraid of the cunning privateer and let the hostages go. Local merchants also contributed to this decision: they wanted to expand their trade routes to the Christian world. Da Gama took as many spices as he could and did not set free his captives; he headed home. 20 days later, the Portuguese met the ship carrying the admiral of Goa; Vasco made him assist with his attacks on islands. The explorers came close to the coast and robbed nearby ships at rest; they imprisoned 30 people and murdered others.

The way home was difficult; people kept dying of scurvy; da Gama’s brother was ill. Only 55 men returned from the expedition; others died of diseases and fights. On September 18, 1499, the Portuguese ships landed in Lisbon.

The delivered goods and spices paid off the travel costs 60 times. The king was pleased and awarded Vasco a generous pension, as well as the title “Admiral of the Seas of India”. Still, the ambitious explorer was not satisfied – the seal of a bastard was burning in his heart, and the man tried to get rid of it; he wanted the country’s respect and the title of count.

In 1500, Pedro Álvares led the next expedition to India; he was going to create a trade colony in Calicut, but Arab merchants interfered. The trading station was robbed and burned down. As Pedro was escaping, he fired coastal villages out of canons. Thus, the war between Portugal and India erupted.

Manuel I did not cease to dream about conquering India and sent Vasco da Gama to the second expedition to establish a Portuguese colony there. In 1502, he headed to the Indian ocean with 20 ships and made a stop in Cannanore in October. The local raja welcomed the invaders and generously awarded them.

On his way to Calicut, Vasco captured an Indian ship and ordered to close people in the lower hold. The ship was set on fire; the despot did not have mercy to women and children. Those who managed to escape from the ship afire were murdered in the water. As da Gama came close to the city, he fired guns and turned the prosperous city into ruins. 800 Indians were taken; torturers cut their arms, noses, and ears and kicked their teeth out. Further on, people were shot from cannons.

It was a perfect opportunity for da Gama to satisfy his sadistic nature. He also used people as targets for arbalesters; mothers and wives of the killed were roaming the coast, looking for their beloved ones’ bodies. Da Gama did not prohibit his soldiers from raping women.

The Portuguese founded a colony at the peninsula and returned to their homeland in 1503. Once again, the king gave Vasco an ample reward but did not make the explorer a count. Thus, the voyager threatened the royal he would leave Portugal, just like Christopher Columbus did, and Manuel I agreed to make da Gama the Count of Vidigueira.

The bloody navigator was married to Catarina de Ataíde who came from a noble family. She gave birth to six sons and a daughter.

Following the order of John III, Vasco da Gama did the last travel to India to handle the corrupted administration. As he came to the country, he died of malaria. The son of the deceased delivered the body to Portugal.

It was put to the family chapel house. In the 19th century, prowlers robbed the grave, but it turned out that someone else’s remnants were there. Vasco da Gama’s body was dislocated to Lisbon.