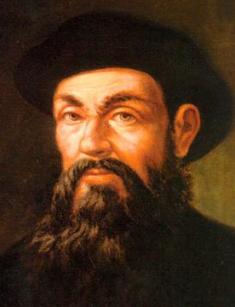 Ferdinand Magellan did what Christopher Columbus dreamed of and became the first person to travel around the globe. He discovered many new territories and straits, proving that Earth was a ball.

As it often happens with great people, Ferdinand Magellan’s biography is unclear sometimes; researchers can only give approximate dates and assumptions.

Ferdinand was born at the end of the 15th century, in 1480. There are various opinions about his birthday (October 17 or November 20) and place of birth (Sabrosa or Porto, Portugal). The noble parents did not have much money; the father, Pedro de Magalhães, was the town’s mayor; the mother’s name was Alda de Mesquita. Ferdinand grew up with four siblings.

When the future explorer was 12, he was a servant in the courtyard of Eleanor of Viseu, the wife of the Portuguese king John II of Portugal. The boy was not sociable and took much interest in sciences; he often stayed inside and studied astronomy, cosmography, and navigation. Magellan remained a court page-boy until 24.

In 1498, the Portuguese discovered the marine passage to India. When the young man turned 25, he left the royal court and volunteered to the fleet; he also participated in the conquering of the east under Francisco de Almeida’s leadership.

Following five years of service, Ferdinand made an attempt to return home but had to stay in India. He was awarded the officer rank for his courage, and fellow soldiers respected him.

In 1512, the man came back to Lisbon, Portugal. Despite his previous bravery, he did not receive many honors in the homeland.

As the riots in Morocco were being suppressed, Magellan had a leg injury; he walked with a limp until his last days. As a result, the officer had to resign from the military service.

Traveling around the world

Whenever Ferdinand had spare time, he studied the king’s secret archives. One day, he found an old map created by some Martin Behaim. The voyager discovered the strait connecting the Atlantic Ocean and the unexplored South Sea.

The German geographer’s map inspired Magellan to explore. He asked the king to allow him to organize an expedition, but Manuel I of Portugal refused. He was angry by Ferdinand’s self-arbitrary actions during the riots in Morocco; besides, the king sent ships to India around Africa, so he did not see any benefit in Magellan’s plan.

Manuel wanted Ferdinand to resign. Humiliated by the sudden denial and anger, he went to Spain, purchased a house, and continued to develop the idea of a sea voyage around the globe.

In the 15th century, spices were just as precious as gold; rich people were nicknamed “pepper sags”. None of these products was made in Europe, and the Arabs’ prices were extremely high.

Thus, the expedition was intended to find the shortest way to the Indian spices. Ferdinand offered his idea to the Casa de Contratación but received no support. The chief official Juan de Aranda offered his private assistance for 20% of the profit if the expedition succeeded. However, Ferdinand’s friend, the astronomer Rui Faleiro, helped him sign a more advantageous contract: 1/8 of the earnings.

According to Pope’s document in 1493, the eastern territories in India belonged to Portugal while Spain owned the western area. The Spanish king allowed the expedition; he hoped to prove that the rich islands with black pepper and nutmeg were situated to the west and should belong to Spain. In fact, Portugal owned them according to the Treaty of Tordesillas.

The journey started on March 22, 1518. The sailors would receive 1/20 of all the fortune collected. The ships could carry food for two years. Five vessels participated: the Trinidad (the flagship), the San Antonio, the Conception, the Victoria and the Santiago.

The great explorer commanded the Trinidad, and João Serrão navigated the Santiago; the Spanish noble took three other ships. Despite the uniting large-scale event, they had conflicts: the Spanish did not like the fact that the Portuguese was the captain and refused to obey. Besides, Ferdinand did not reveal the route plan, and everybody was suspecting each other. Although the Spanish king ordered to listen to Magellan, the Spanish had a secret agreement to get rid of him if necessary.

Magellan’s friend, the astronomer Rui Faleiro, could not join the circumnavigation: he had rampage attacks.

Ferdinand Magellan’s travel around the globe began on September 20, 1519. 256 voyagers headed to the Canary Islands along the east coast of South America, looking for the South Sea. The crew discovered the beautiful archipelago Tierra del Fuego; the islands seemed uninhabited in the daytime; however, when the ships passed by at night, the Europeans saw lights. Magellan believed they had volcanic nature and named the archipelago accordingly. However, the locals were building fires there.

The vessels passed between Patagonia and Tierra del Fuego; the strait was named after the Portuguese voyager. Further on, the ships entered the Pacific Ocean.

All in all, the circumnavigation took 1081 days. Only one ship, the Victoria, returned home and carried 18 sailors and their commander, Juan Sebastián Elcano. It was proven that our planet was a ball.

Ferdinand Magellan did not look like a noble man: ordinary looks, heavily-built body, and short stature. The explorer believed that a person’s actions, not their appearances, were significant.

Ferdinand met Diogo Barbosa in the south of Spain; he married his beautiful daughter, Maria Caldera Beatriz Barbosa. The couple’s first child died of a disease. When the woman was giving birth to the second child, she passed away, leaving the great explorer without offspring.

Although a supply had been prepared, the voyagers ran out of water and food in several months; they had to chew sails to still their hunger for a while. 21 men died of starvation and scurvy.

One day, the sailors reached the Philippines and stoсked up with food. They were ready to continue the journey, but Magellan had a quarrel with the Mactan island leader. The Portuguese wanted to demonstrate Spain’s power and organize a military expedition against the aborigines. To their surprise, the Europeans lost: their training was not as good as that of their opponents.

Ferdinand Magellan was killed during a battle on April 27, 1521.