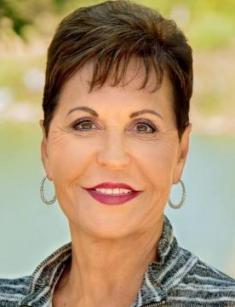 Christian author and speaker Joyce Meyer was sexually abused for 15 years, overcame a serious illness when she was young and is now one of the most popular American evangelicals according to Time magazine. The woman accounts for about 100 books about faith and humility, including bestsellers Battlefield of the Mind: Winning the Battle in Your Mind, Look Great, Eat the Cookie ... Buy the Shoes: Giving Yourself Permission to Lighten Up and Never Give Up!: Relentless Determination to Overcome Life's Challenges.

Pauline Joyce Hutchison (name Joyce Mayer at birth) was born on June 4, 1943, in St. Louis, Missouri. Shortly after her birth, her father was sent to the front, and her mother had to bring her up alone.

Becoming a famous writer and speaker, Joyce said in an interview that the horrors seen on the fields of World War II made her father aggressive. The man became addicted to alcohol. Since 1946 and for the next 15 years, the father had been sexually abusing the girl.

In 1951, after six years of fear of an adult man, Joyce tried to find protection from her mother, but the woman herself was afraid of her husband. When Joyce was 14 years old, her mother witnessed a rape scene. Even after this incident, the woman did not do anything.

Meyer graduated from O'Fallon Technical High School in St. Louis. When she became an adult, she left her father's house and "married the first young man who showed interest." Escaping from some problems gave rise to others. So, the husband of the future Evangelist was a "manipulator, thief and crook."

At the age of 9, Joyce told her relatives that she was "born-again" and said that she was "drunk with the Spirit of God." The girl's words, probably provoked by her father's regular bullying, became prophetic.

In February 1976, Meyer stopped at a traffic light and felt her heart and thoughts fill with faith. A few months later, the inspired girl opened a Bible study group called Life in the Word and found a job as an assistant preacher at the Christian Center in Fenton, Minnesota.

The experience gained from the minister allowed Joyce to start preaching her own sermons live on the local radio station in 1983. The program was in demand, and the right to broadcast a religious program was bought by six more stations located in Chicago and Kansas City.

The popularity of Joyce Meyer's ministry was growing. Together with her husband Dave, she officially registered Life in the Word in 1986, which was later exempted from taxes as a religious community. By the end of the 20th century, voluntary contributions from Life in the Word members amounted to more than $68,000 annually.

In 1993, Dave suggested that ministry should be broadcast on television. The author's program of Meyer called Enjoying Everyday Life still now is broadcast on Black Entertainment Television. The audience reaches 4.5 billion people. Its TV programs, including the monologue Pride and Humility, are translated into 120 languages.

August 18, 2001 is a mourning date for the ministry of Joyce Meyer. On that day, the woman and her colleague Don Clowers were to preach to 230 people at the Manor Hotel in the Philippines, but there was a fire in the hotel early in the morning. As a result, 78 people died and 54 others were injured. According to the investigation, there could have been far fewer casualties if the windows hadn't had bars on them and the corridors and rooms had been equipped with firefighting systems.

An integral part of Meyer's ministry is the Helping Hand mission, which aims to help those in need. The first Helping Hand reached St. Louis, where the Dream Center now operates. It is home to people with no particular place to live, citizens under challenging situations.

Joyce's active religious position led to her father's healing. He never repented of his abuse to his daughter but decided to justify himself to the Lord. Meyer once said in an interview that her father was "the most fanatical Christian" whom she had met: he prayed 6 hours a day, followed all the commandments. Joyce baptized him herself.

In the 2000s, Meyer was in the middle of a financial scandal. The woman was criticized for "excessive lifestyle": she traveled on a private plane, owned thousands of square meters of housing and acres of land, while not paying taxes.

Newspaper St. Louis Post-Dispatch published a report on the property of the Evangelist in 2003. Her plane was estimated at $10 million, her Mercedes car at $107,000, and two houses at $2 million each, one for Joyce and her husband, and the other for four children. The headquarters of Life in Word was estimated at $20 million, its interior - another $5.7 million, including a table made of malachite and an antique dresser with marble flooring. The publication served as an occasion to check the Mayer family.

Joyce's salary as the head of the religious organization was $900,000 per year, and her wife's salary was $450,000 per year. After the inspection was initiated, the figures were halved. Now, Joyce's main income comes from publishing her books. The preacher has published more than 100 books, which have been translated into 140 languages. More than 35 million copies were distributed to the followers of the Joyce Meyer ministry free of charge. Electronic versions are available on the official website of the Evangelist.

It' s hard to call Joyce Meyer's personal life simple, like the whole biography. In 1961, she married a car salesman who cheated on her and stole money from her employer. In 1964, Mayer had a miscarriage. The new pregnancy did not lead her out of depression. Joyce suffered from insomnia, starvation, and took sleeping pills, despite the prohibition of doctors. On December 18, 1965, a boy who was named David in honor of the girl's brother was born into the family.

The birth of the baby didn't change Joyce's husband. In summer 1966, after taking the child, the woman returned to her father's house, and three months later the divorce process was completed. The ex-husband did not claim custody, and David stayed with his mother.

At the end of 1966, Joyce became acquainted with Dave Meyer, a design engineer. On January 7, 1967, the couple celebrated their wedding. Even though she then had a decent man, she would have a happy life and a house full of children in front of her, she was unhappy. She believed that neither marriage nor prayer could solve all the problems.

The 1970s were the years of struggle. Meyer suffered from migraines and was often ill. She had to undergo a gastrectomy (stomach removal) because of her hunger. Besides, doctors diagnosed with breast cancer. Joyce needed surgery to remove a rapidly growing tumor. Fortunately, the disease did not return. The Evangelist devoted her book Look Great, Feel Great: 12 Keys to Enjoying a Healthy Life Now to the fight against oncology.

Despite her age, one of the leading evangelicals of the 21st century continues to preach to the needy. The 2019 speaking schedule includes dozens of U.S. cities, as well as major religious conferences such as Love Life. According to online sources, Joyce Meyer has a net worth of $8 million.