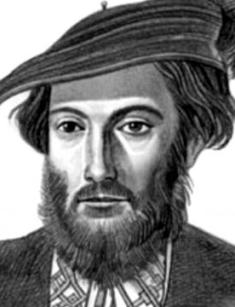 Amerigo Vespucci did not earn the fame of a circumnavigator like the Portuguese Ferdinand Magellan did – on the contrary, he used to be seen as a liar who wanted to take Christopher Columbus’s fame. However, it turned out the Italian merchant made a brilliant contribution to geography: he studied the continent named South America later. Vespucci described locals’ way of life, and his manuscripts proved to be the international bestseller of the 16th century.

The future traveler was born on March 9, 1451 (1454) in Florence, Italy. His father was not wealthy and worked as a notary; the details about his mother’s life are unknown. Amerigo had two elder brothers: Antonio pursued a scientific career at the University of Pisa, and Gerolamo became a Syrian trader.

The boy was curious and calm. He took an interest in physics early and gladly studied marine geography and astronomy. The uncle, Giorgio Antonio Vespucci, was a friar in the monastery of San Marco and taught his nephew Latin.

In 1470, the young man entered the University of Pisa and made a career as an economist.

As Amerigo was traveling to a Toscana commune, he bought an old map of the Mediterranean Sea and started examining it thoroughly. He could hardly imagine he would learn cartography, navigation, and ship construction in the future.

The discovery of America

Before Vespucci began to explore the world, he was a financier. In 1490, he went to study trade-making to Sevilla along with his nephew and started working for famous and wealthy Giannotto Berardi. In 1493, he met the Italian admiral Christopher Columbus and helped him organize his second and third expeditions.

From 1498, Vespucci supplied voyages and worked on sailors’ wages. The next year, the 45-year-old man took his first long journey.

Why Amerigo decided to change his occupation so suddenly is unknown. According to one theory, the Italian was not wealthy and did not want to steal the money he was managing. Another hypothesis claims that the man was rich and made a fortune for 30 years of his service, but Columbus’s expeditions made him thirsty for adventures. As long as the merchant realized that navigation was beneficial and exciting, he quit his old job and began to prepare for it at his own expenses.

In 1499, Amerigo went to his first voyage with Columbus’s supporter, Alonso de Ojeda, who had had an expedition with four ships on May 20. Some sources claim Vespucci took the navigator position while others insist he was the captain. The man explored the ocean, the mouth of the Amazon River, and the coast of South America. Although the first attempt did not bring the Florentine money, it was notable for the valuable sailing experience.

Soon, Manuel I of Portugal invited the traveler to Lisbon, and the next two expeditions were supported by Portugal.

In 1502, Amerigo became one of the first explorers who stepped on the Brazilian area where Rio de Janeiro appeared later. The name of the city is translated from Portuguese as “January river” – this place was explored in this month. Vespucci commanded a small ship on his own. Soon, he came to the opinion different from Columbus’s ideas: the former financier believed the Brazilian land was a new territory rather than an Asian island and gave it the name “the New World”.

The writing skills of the Italian explorer were pretty good; his epistolary legacy is about 30 pages. As the man was finding new lands and coasts, he wrote down his impressions in detail and had the letters sent to Lorenzo de’ Medici and his godfather, Piero Soderini. Amerigo’s manuscripts proved to be immensely popular; they were republished almost 60 times while Columbus’s notes had only 12 reissues.

Some Italian publisher presented the letters in a book; it was translated into many languages of the world. In 1507, the map with the outlines of the new continent (“Amerigo’s land” or “America”) appeared in France. There is another theory that Leonardo da Vinci, Vespucci’s friend, was the first to create the map of America with the explorer’s portrait. The artist and inventor did that to thank Amerigo for making Leonardo the first tobacco smoker in Europe. Finally, some sources claim that America was named after a merchant Richard Amerike from Bristol.

In 1505, after the exhausting journey, Vespucci came to Spain, seeking for a settled life, and married soon. Whether the man had any children waiting for him at home is indefinite.

Amerigo was a natural adventurer who did not hesitate to give up his calm life for risky expeditions one day. He was a perspicacious, literary talented, and honest person. Vespucci did not make use of Columbus’s fame and did not want honors the Spanish admiral deserved; Christopher always talked about him as a decent man.

The Italian voyager died on February 22, 1512, in Sevilla, Spain. He was 57 years old; the cause of death remained unknown. Only a few people were present at the funeral ceremony.

In February 1931, the ship Amerigo Vespucci was floated off from Napoli.