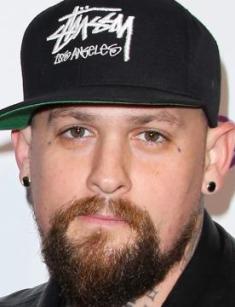 Benji Madden is an American musician, guitarist, and backing vocalist for the rock band Good Charlotte. He is married to actress Cameron Diaz.

Benji Madden was born on March 11, 1979, in the small town of Waldorf, Maryland. He was brought up in an ordinary family. His parents are Roger Combs and Robin Madden. They are representatives of the working class. The man has a twin brother, Joel, as well as older brother Josh and younger sister Sarah.

He was born Benjamin Levi Combs. But, when he was 16 years old, his father left the family, and the boy took the surname of his mother. Later, his life had a difficult period. There was not enough money, and his mother could not provide for herself and four children.

Benji had to leave school and find a job. One day, the young man and his brother attended the concert of Beastie Boys, after which they decided to organize their own band. They called their band The Benji, Joel and Brian Band. Neither the title nor the group existed for a long time, but the guys could attract attention.

Soon their schoolmates joined them, and the new rock band Good Charlotte was formed. In 1996, bassist Paul Thomas joined the group, and a little later, drummer Aaron Escolopio became its member. It is noteworthy that the brothers did not have a musical education and could not play the guitar, so they learned everything on their own.

In 1999, the group began to give their first concerts in local clubs, attracting fans. Later, Good Charlotte performed an opening act for the bands Blink 182 and Lit during their tours.

In 2000, the band signed a contract with Epic Records. The same year, their debut album Good Charlotte was released, but, unfortunately, it did not become popular with listeners. Of course, it did not stop the guys. After two years, they recorded the second album The Young and the Hopeless.

This disc allowed the guys to top the charts and become firmly established in the pop-punk community. The single "The Anthem" became so famous that this album was certified triple platinum. And the guys eventually became famous. They have been invited to television shows, magazines wrote about them. Their faces appeared on the cover of the legendary Rolling Stone. Young musicians could only dream about it.

The next album, The Chronicles of Life and Death, was released in 2004, going platinum once again. But the reviews from critics and fans were rather mixed. The music of this album was very different from the band's previous work. Fans were waiting for driving songs but listened to melancholic and sad compositions.

The next two albums, Good Morning Revival and Cardiology, also focused on sadness. In 2011, the guys announced a break in their career.

In 2016, their sixth album, Youth Authority, was released. After such a long break, they did not lose their original sound. During the existence of the band, only Benji and his brother Joel have been permanent participants. Other musicians changed constantly.

Benji Madden has always attracted women. All his girlfriends have been beautiful and successful. In 2006, the musician began dating Australian singer and model Sophie Monk. Their love affair lasted two years. They were even engaged, but in 2008 the information about their separation appeared on the Web. Later they confirmed it while reporting that they came to a mutual decision and remained friends.

But Madden was not alone for a long time. Inimitable Paris Hilton became his girlfriend. Fans immediately began speculating about their wedding. Some people were sure that they were secretly engaged since they wore rings with each other's initials on their ring fingers.

However, the wedding was not meant to happen. After ten months, they broke up. There were several reasons for their separation. Benji was very jealous, and they had irreconcilable differences.

After the breakup with Paris, there were rumors about Madden’s relationship with the outrageous singer and actress, Miley Cyrus, but it was not officially confirmed. Benji also had a love affair with singer Katy Perry. The musician had a very short relationship with Kim Kardashian.

But everything changed in May 2014. Benji began dating Hollywood actress Cameron Diaz. The couple announced their engagement seven months later. The wedding took place on January 5, 2015.

Benji and Cameron decided not to celebrate the magnificent wedding, and the celebration took place in Diaz's mansion in Beverly Hills. On this occasion, they invited close friends: Reese Witherspoon, Gwyneth Paltrow, Drew Barrymore, as well as Joel's brother-in-law and his wife, Nicole Richie.

In fact, fans were shocked when their first photos taken by the paparazzi and rumors about the relationship began to appear on the Web. Some fans said that the celebrities might not be good for each other. Benji is not only six years younger than Diaz, but also shorter than her. His height is 5.51 ft. (168 cm), while she is 5.7 ft. (174 cm) tall. But the lovers were not embarrassed by the age and height differences, and the opinions of others did not matter either.

They really love each other. Benji even has a tattoo with his wife’s name on his chest. In turn, Cameron decided to quit her acting career and devote herself to the family.

Immediately after the wedding, Diaz drew a line in the sand publicly, saying that she did not plan to give birth to children. But in December 2017, information appeared on the Web that the couple decided to adopt a baby. In February 2018, insiders reported that Madden's wife was pregnant. According to them, Cameron underwent IVF treatment, and the result was positive. So soon Benji Madden will become a father for the first time.

Nowadays, the musician is actively touring with the band, which is regularly reported on Instagram. In addition to photos of concerts and new music videos, the pictures with his wife sometimes appear on social media. He does not like to make his relationship public, but fans are sure that Benji Madden has finally ranged himself and is really happy.

Benji Madden has a net worth of $16 million.