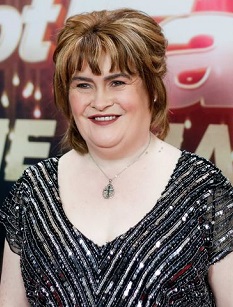 The Scottish singer gained world-wide popularity after her participation in the TV musical contest. She has a long and challenging path to success; that's why her story produced broad resonance. People compared her romance with the American dream when an absolute talent helped Susan to overcome poverty. Today she has recognition by critics and ordinary people and honored numerous awards.

The Scottish singer is the youngest of nine children in her family. Susan was born with complications, because of oxygen deprivation she had mild brain damage. When she went to school, the girl had learning disabilities and frequently became the object of teasing and bullying. Later it was discovered that Susan has Asperger syndrome.

All her childhood, Susan was drawn to music. When she was 12, the girl became a constant participant of school musical performances. Her talent was apparent, and after graduating the school, she tried to combine musical education with work. Susan worked as a cook trainee, sang in the church choir and local festivals and bars. She studied at Acting School in Edinburgh.

The singer has big ambitions and puts much efforts to get local and international fame, but her efforts haven't been successful for a long time. She came on an audition for a TV talent show in Britain, but this attempt was failed.

Susan spent all her savings to record a professional demo tape. This tape was sent to numerous companies, radio, TV, talent shows. In 2002 she continued to send recordings for local performances and got some local fame, but Susan wanted more.

When her mother died, she was devasted but decided to apply to audition for the talent show to honor her mother's memory. Her mother was a big fan of the show and encouraged her to become a contestant. That time she worked as a charity worker in her rural Scottish town.

In 2009 her first audition for Britain's Got Talents appeared on screen, the singer earned standing ovation and recognition by the judges. Ten million people watched her hearing, and Susan finally got international fame.

In 2010 the singer released her first album after which there were five more albums.

She made several successful cameos in film drama and comedy. Susan wrote her autobiography in 2010. Thanks to her numerous concerts and successful career she gathered a good fortune, her net worth is more than $40 million. The singer sold 23 million records through her not long professional career.

Her first audition has made a splash not only because of her voice but also her biography. Susan became a symbol for all people who have a dream. Susan was a favorite of the show but became second. After the final Susan was in a psychiatric clinic, because of her emotional and physical exhaustion, this news attracted wide-spread attention. Susan left the clinic after several days and participated in the tour with other contestants of the show.

America's Got Talent: The Champions and Ten

In 2018 the singer confirmed that she was going to take part in the American talent show. She explained her decision as to the wish to win the musical contest. The singer performed several songs from her albums and was honored with golden buzzer by the judge of the competition. In the end of August in 2019, she will participate in the results show.

Many people focused on her appearance. Thus, Media said that during her first audition, people expected that she was quack like a duck because of her presence. But the singer displays actual persistence and underlines that she doesn't care what people talk about her, and she doesn't participate in a beauty contest.

The singer continued to live in her family home; she has never been married and hasn't got children. In 2014 there were rumors that the singer met her first boyfriend. In 2019 there were a lot of talks about her transformation caused by weight loss. After losing about 50 pounds, she has looked healthier and slimmer. The doctors found that she had diabetes, and this was the primary reason why Susan tried to lose weight and change her lifestyle. Susan confessed the biggest regret what she has is the absence of a child. In 2019 she shared that the singer wants to become a foster parent.

Susan's story produced a broad resonance in the USA. The American reporters discussed Bowl's success in the spirit of the American dream when a right talent overcame poverty and adversity. Some reporters compared her story as a beautiful metamorphose from Shrek to My Fair Lady.

Susan achieved several Guinness World Records for Fastest-selling Album by a Female (UK), Most Successful First Week UK Debut Album Sales, as well as Oldest Artist to Reach No. 1 with a Debut Album among them.