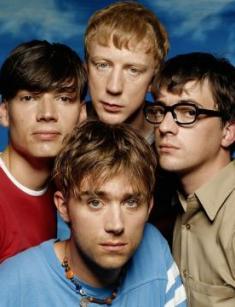 The British group Blur was founded in London in the late 1980s and earned its fame thanks to the collaboration with Oasis. The band contributed to the development of indie rock, lo-fi, and alternative dance styles. Blur recorded eight studio albums and collected many prestigious prizes, including the Brit Award for Outstanding Contribution to Music.

The students of the art college Damon Albarn and Graham Coxon stood at the origins of the band.

In 1988, the childhood friends, who had been interested in music for a long time, performed in the group Circus and then founded their own project named Seymour after the work of the American writer Jerome Salinger. The drummer Dave Rowntree and the bassist Alex James joined them soon.

The young men gave the first concert in their home country and took the attention of Andy Ross, the producer of Food Records. He invited them to the professional studio, and the group changed its name for Blur, as well as gained a simple and elegant logo. The band signed the contract for the first single and went touring in Great Britain.

Further on, the collaboration with the talented and forward-looking producer Stephen Street was beneficial: the musicians got into the top ten groups in the country and enjoyed experiments in Madchester, disco, and indie rock genres. In a while, they had the chance to hold shows in the most significant grounds and festivals.

The successful career hurt the relationships, though. The first problems rose during the tour in1993 when the competition with the pop group Suede undermined Blur’s popularity in Britain.

In 1996, Coxon started abusing alcohol while James was star-struck; the artists decided to take a break and dive into separate projects.

In 2002, the young men tried to reunite and record a new album, but the guitarist failed everyone and did not appear in the studio in the last moment; he announced he had left Blur. Thus, the sounding of the seventh studio album worsened. After the disc release, Blur quit the stage and kept silence for five long years; fans were anxious and tense.

In 2008, Coxon and Albarn finally made amends and announced the concert in Hyde Park, London. Soon, they presented the collection of best singles Midlife: A Beginner's Guide to Blur and participated in the Glastonbury festival.

Fans were happy about the group’s reunion and welcomed the 2015 album The Magic Whip. However, after the supporting tour, Blur had another quarrel and split up again.

The group debuted with the singles “She’s So High”, “There’s No Other Way”, and “Bang”; all of them were included in the 1991 album Leisure. It was the swan song for the shoegazing style and did not have much success; the project reached the seventh position in the national chart.

Soon, people noticed Blur, and the tour in the United States brought pretty much money that covered the album production expenses. The concert track list included the new song, “Popscene”, notable for the atmosphere of 60’s Britain and heart-rending sounding with lots of postmodernist elements.

Although Blur’s career had just begun, it was threatened; Albarn and his colleagues had to revise their style immediately. They overcame the influence of the American music and focused on the British style close to The Kinks; the group started working on the new album, Modern Life Is Rubbish, under Andy Partridge and Stephen Street from Food Records. As soon as the material was recorded and polished, the label administration wanted a lead hit to promote the disc. The musicians returned to the studio and created “For Tomorrow”.

Blur miraculously escaped from the accusations of racism and nationalism because of the photo “British Image 1” with a mastiff, skinheads, and mods. To avoid a scandal, they added “British Image 2” portraying a noble picnic in the pre-war era. The renewed album received reticent reviews and failed to reach the top ten in British and American charts.

However, the musicians did not lose their spirits and presented Parklife in 1994; it immediately flew to the top positions in their home country. Music exerts were actively discussing Blur and called them theorists and leading representatives of the new-born style, Britpop. The artists’ songs sounded on the radio and had many nominations; Blur won Brit Awards in four categories in 1995 and transformed from the alternative bands to the popular culture.

The musicians were inspired and recorded the new album, The Great Escape; they also had a theater competition with Oasis named “Battle of Britpop” later. The opponents were releasing singles and following the ratings for several months; moreover, the band leaders were giving interviews and ignited people’s interest by mutual offenses. Eventually, Albarn and his colleagues won the contest and had 274 000 copies of “Country House” sold. At the same time, they lost in the album battle.

Following these events, the new wave of conflicts arose; the misunderstanding hindered with the creation process and extended the time of the studio disc work. The new pop icons did not want to disappear from the music world, though, and presented the concert album Live At The Budokan.

1996 brought the most successful disc Blur. Indie-rock and lo-fi hits “Beetlebum” and “Song 2” were extremely popular in charts; the music videos were broadcast on many channels and received nominations for MTV Awards and NME Awards.

Blur’s music appeared in TV commercials and soundtracks thanks to the remixes in Bustin’ + Dronin’ and became the band’s trademark. The audience also remembered their hits “Coffee & TV”, “B.L.U.R.E.M.I.”, and “Tender” from the album 13; “Music Is My Radar” from the collection of hits Blur: The Best Of was also loved by millions.

In 1999-2000, the artists had a world tour and took an artistic pause; they focused on their solo projects. When the band reunited for a collaboration, Coxon said he was leaving. As a result, the recording of Think Tank turned out to be an electro and alternative rock experiment without a guitarist. Banksy’s work appeared on the disc cover. The media gave positive reviews; the project was included in many prestigious ratings. “Out of Time”, “Crazy Beat” and “Good Song” were additional singles released in April-October 2003.

The group actually broke up until 2008. When Coxon and Albarn announced the reunion, fans were more than happy. The new stage began with two shows in London and the release of Midlife: A Beginner’s Guide to Blur. Further on, the artists started working on the eighth studio album, The Magic Whip. It came out on April 27, 2015, and topped the UK Albums Chart. The documentary under the same title accompanied the premiere; it was shown in Great Britain and other countries in Europe and Asia.

Blur split up after the 2015-2016 tour again. Albarn is busy with the virtual band Gorillaz; he participated in the show The Good, The Bad & The Queen in April 2019.

Graham Coxon is also involved in music and performed in the Mexican club Galera not so long ago. There is no information about other band members. However, Blur had a short reunion in spring 2019 and played in the charity Africa Express event.