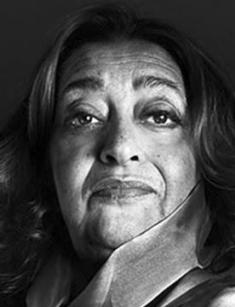 Zaha Mohammad Hadid is an architect of Iraqi descent who lived and worked in the UK. She was the first woman in the world to receive the Pritzker Architecture Prize.

Zaha was born on October 31, 1950, in the capital of Iraq in the family of Muhammad al-Hajj Husayn Hadid, the co-founder of the National Democratic Party. The girl’s mother, Wajiha al-Sabunji, was an artist from Mosul. The parents led a bourgeois life.

Since childhood, Zaha showed an interest in art and architecture. The girl always fantasized and created paper buildings. At the age of 22, Zaha Hadid graduated from the American University of Beirut where she studied mathematics and went to London to study at the Architectural Association School of Architecture. The girl studied with Rem Koolhaas and Elia Zenghelis. While studying in the UK, Zaha acquired a deep knowledge of the work of Kazimir Malevich and Russian architects of the early XX century.

The avant-garde became Hadid’s favorite art movement, which influenced her work. Rem Koolhaas, a Dutch architect and deconstructivist, highly appreciated Zaha’s talent and considered the woman to be the best student who had ever studied with him. The first known work of Zaha was the design of the inhabited bridge spanning the Thames, which she created in 1976.

In 1977, after graduating from the university, Zaha Hadid began to work at the Office for Metropolitan Architecture with Koolhaas. She left this job after two years. In 1979, the woman opened her own architectural firm, Zaha Hadid Architects. Besides creating designs, Zaha began teaching at the Architectural Association, where she worked until 1987. Hadid did not create the design of ordinary buildings, and she was interested in large iconic objects. Therefore, Zaha mainly created paper designs and participated in competitions.

The first victory of the architect in the international competition was the plan for the Peak Leisure Club which Zaha created for a client from Hong Kong, but it was not constructed due to bankruptcy of the company. In 1994, when Zaha Hadid’s plan for an opera house in Cardiff won in the UK, a scandal broke out because people put extreme pressure on the project owner, forcing the company to choose a different and less ambitious architect and abandon the avant-garde project of the young Arab woman.

Another bright work of this year was the plan for an inverted skyscraper in Leicester, which remained unbuilt. The first completed project was the Vitra Fire Station project in Weil-am-Rhein. A significant event took place in 1993. Although many of Hadid's projects remained paper plans, it did not stop Zaha. The architect was so passionate about what she loved that she often slept 4 hours a day.

In 1997, after the construction of the Guggenheim Museum Bilbao, people became interested in Zaha Hadid’s ideas. From 1998 to 1999, the architect erected two Arts Centers in Ohio, the United States, and in Rome. The buildings designed by the Iraqi architect have become landmarks. Finally, the name of Zaha Hadid became well-known in the world, after participating in the development of the Rosenthal Center for Contemporary Art in Cincinnati, the USA, which was constructed in 2003.

In 2005, Zaha was awarded the Designer of the Year Award at the Design Miami Worldwide Exhibition. The collection of pieces of furniture has been exhibited at the Museum of Modern Art in Manhattan, the German Museum of Architecture in Frankfurt. Zaha Hadid lectured on architecture and art around the world.

On May 31, 2004, Zaha Hadid had a significant event in her life. The architect was awarded the Pritzker Architecture Prize. The award ceremony was held in St. Petersburg at the Hermitage Theater. Since that time, Hadid began cooperation with Russia. She repeatedly came to Moscow to hold masterclasses, in 2005 she collaborated with a group of designers on the design for the Dominion Tower, a residential complex, in the Russian capital.

In 2012, Zaha Hadid created a futuristic house design for businessman Vladislav Doronin. Three years later, she worked on the Peresvet Plaza business center. In 2012, after the opening of Heydar Aliyev Cultural Centre in Baku, created by Zaha Hadid, the architect won the Design Museum Design of the Year Award.

The master’s works include various functional building designs: The Phaeno Science Center in Wolfsburg, Ordrupgaard annexe in Denmark, the Hotel Puerta America in Spain, the station of funicular in Austria, the aquatic centre in London, the theater project in Morocco, the Al Wakrah Stadium in Qatar, the high school in London. A significant project of the 2000s was the construction of MAXXI, a museum on the outskirts of Rome.

In 2010 and 2011, Zaha Hadid won the Royal Institute of British Architects Stirling Prize. The photos of her works are freely available on the Internet; everyone can get acquainted with them. Over time, buildings designed by Zaha Hadid became streamlined, completely losing corners and straight lines. The designer moved away from deconstructivism, creating her style.

Personal life could not become a part of Zaha Hadid’s biography. The architect did not have a family and children.

Hadid considered her children to be projects that she was constantly working on. For all her life, the designer lived in an apartment in London, which was located near the architectural firm.

In March 2016, Zaha Hadid went to a Miami hospital for treatment of bronchitis. But on March 31, the architect suddenly died.

Doctors called the cause of death a heart attack. After death, Hadid left only the architectural business.

Now Zaha Hadid Architects is run by her partner in the company, Patrik Schumacher, who decided to complete 36 plans of the master, which remained unbuilt. Among the brand new orders are the construction of a business center in Prague and an industrial park in the suburbs of Moscow.

At the time of her death, Zaha Hadid had a net worth of $215 million.