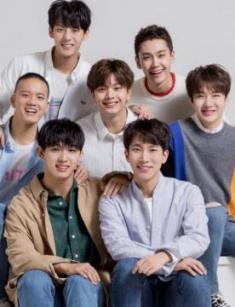 BtoB is a South Korean music band which consists of 7 members. The producer of the team is Cube Entertainment. The name of the boy band is an acronym for Born to Beat. They debuted in the spring of 2012 on M Countdown.

Like most groups from South Korea, the young people participated in a common project in which their talent was noticed by producers. The guys were involved in the filming of the series I Live in Cheongdam-dong. They could prove their skills and talents on the set, which later stood them in good stead on the stage.

The band initially consisted of 5 members, but there were 7 participants in February 2012. The singers have a very different perception of the world, style, and life. The frontman is Eunkwang (Seo Eunkwang), who has become the leader of the group. He is proud, keen on football, billiards, and playing the piano. Vocalist and rapper Peniel (Peniel Shin) plays the guitar, loves shooting and rugby. Minhyuk (Lee Min-hyuk) is a singer who writes lyrics and composes music. He prefers to spend leisure time watching a movie.

Hyunsik (Im Hyun-sik) is a songwriter and singer who can play the piano and guitar. Sungjae (Yook Sung-jae) could have performed with the JYP band but failed at the audition. However, fortune smiled upon him in BtoB. He loves fishing and snowboarding. Ilhoon (Jung Il-hoon) is a rapper who writes poems. Changsub (Lee Chang-sub) is a skater and musician.

The group debuted on March 21, 2012, performing the songs “Insane” and “Imagine” on the popular TV show; the musicians impressed the audience with dancing and the atmosphere created in the studio. A month later, they released the debut EP, and then the reality program, Amazon, was broadcast on television, telling the story of the creation of the band.

In May, people saw the Special Edition of their first EP, which also included new singles. The group began to give concerts and shoot videos. Besides, the program BtoB MTV Diary about the singers’ off-stage life was launched. The first episodes showed other pop stars, but then the producers focused on the members of the boy band.

The album Press Play was released in September and topped the Korean charts. The group received the Rookie of the Month (September) Award. The third album, Thriller, in which the musicians appeared as impudent hooligans, was not long in coming. The artists were invited to participate in the TV series Monstar. The bit parts in the drama made them even more famous. The experience helped Sungjae begin his acting career.

In 2014, they released the EPs, Beep Beep and Move. The subsequent concerts of the group had a full house of fans. By the end of autumn, the musicians had gone on a tour around Japan and had been ranked on the Oricon Singles Chart.

The young performers filmed music videos, released new discs regularly, and became the most popular teen idols. It attracted the attention of representatives of famous brands and producers of various projects. The artists have increasingly appeared on television, and in 2015 signed a contract with the clothing brand, TBJ. Immediately after that, the fifth album I mean was released.

In 2019, the artists are actively developing their career, but the group has become involved in the scandal related to education. Two singers studied at the broadcasting and entertainment department of Dongshin University from 2010 to 2013. Their degrees were canceled due to poor attendance.

It did not affect the popularity of BtoB. Nowadays, the young people are at the peak of fame. They communicate with followers on social media, where they post personal photos and videos. Fans of the artists have also created fan pages in honor of their idols.