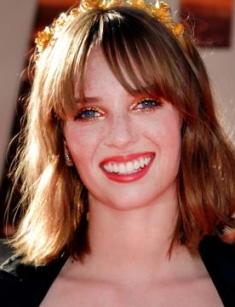 The young actress Maya Hawke is the daughter of Ethan Hawke and Uma Thurman. Although the rising star has had only a few roles, each of them was so brilliant that critics were sure: the successor of the Hollywood dynasty was just as talented as her parents.

Maya’s parents met at the movie set of the movie Gattaca and married two months before the girl was born. The artist has a younger brother Levon and three younger half-sisters.

Little Maya had dyslexia: it was difficult for the child to perceive written words and write. The actress Fannie Flagg used to have the same problems but overcame them and became an excellent writer. Perhaps, Hawke will do the same – she is related to Tennessee Williams on the father’s side, and Robert Thurman, who created many books on Tibetan Buddhism, is her relative from the mother’s line.

Maya inherited not only her family talents but also their beauty. The actress’s great grandmother posed to the Swedish sculptor Axel Ebbe when he was working on the figure of a naked woman; today, the statue is exhibited in Smygehuk, Southern Sweden. Hawke started her career as a model and appeared in a Calvin Klein commercial; Vogue published her photos. The young woman’s height is 5.71 feet (174 cm.), and her weight is 119 lbs. (54 kg.).

The artist debuted on the screen in the 2017 mini-series Little Women; she personified Jo March there. It was based on Louisa May Alcott’s book about an American family during the Civil War. The project should not be confused with the 2019 movie under the same title starring Saoirse Ronan, Meryl Streep, and Florence Pugh.

In 2018, the actress played Romy in Amanda Kramer’s thriller Ladyworld. It was a variation of William Golding’s Lord of the Flies with female characters. As long as food and water supplies are fading away, teenage girls find themselves trapped and get savage.

In 2019, fans could see Maya in the third season of the sci-fi series Stranger Things that made the actor Finn Wolfhard famous. Hawke’s character, Robin Buckley, works with Steve Harrington (Joe Keery). The actress’s father appreciated his daughter’s work; Maya was nominated for the Saturn Award for Best Supporting Actress in Streaming Presentation.

There is little information about the celebrity’s personal life. Judging by her Instagram page, she is dating Gus Wenner, the son of the Rolling Stone founder. The young man works for his dad in the great media empire.

The artist often shares pictures with her relatives and photos with animals, from dogs to kangaroos.

The new movie with Maya Hawke, Once Upon a Time in Hollywood by Quentin Tarantino, was premiered on July 26, 2019. It was the last project of the American actor Luke Perry. The movie received six minutes of applause at the Cannes Film Festival.

Similar to Stranger Things, Once Upon a Time in Hollywood is about the charm of the old epoch. Hawke personified Linda, the girlfriend of Charles Manson. The leader of the Manson Family cult is known for murdering Sharon Tate, the wife of the director Roman Polanski.

The young actress is actively developing her career. Soon, the audience will see her in Human Capital by Marc Meyers and Mainstream by Gia Coppola. On August 21, 2019, the celebrity debuted as a singer and presented the single “To Love a Boy”.