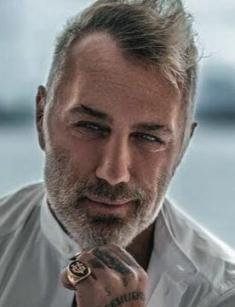 Athletic body, stylish outfits, yachts, airplanes, luxurious mansions, and not less gorgeous and luxurious women, a multi-million army of subscribers and admirers on Instagram, which can be compared to Madonna by its popularity. The Italian millionaire Gianluca Vacchi lives a life without limiting himself in anything. Italian say about the men lie him:

"He was born with a silver spoon in his mouth."

Gianluca was born on the 5th of August in 1967 in Bologna. In 1961, Vacchi’s father founded the company on the production of package and packaging equipment for the pharmaceutical sphere. The enterprising Italian has found a profitable field – in a short time; the family company appeared on the world market.

Vacchi is an Italian surname which is among the oldest ones. In his clan, Gianluca had businessmen and artistic creators. In one of the interviews, Vacchi mentioned one of his ancestors whose artworks were exhibited at the well-known Palazzo Pitti gallery in Florence. It seems that Gianluca inherited his passion for the beauty from him.

When Gianluca was young, he used to tuck the left pant leg on jeans, trousers and even shorts. He has remained this habit till present day; he only makes an exception for his tuxedo. After Gianluca had graduated from the school, he entered the University of Bologna, on the Faculty of Economics and Commerce, and got his degree in 1993. Till the age of twenty-nine, he was working in the family business and then decided to expand his sphere of activities.

Gianluca Vacchi is known for a number of tattoos. He has made a real show of the creation of one of his tattoos. The millionaire has shot the process on video and published it in his Instagram account.

In his family company Fin Vacchi, Gianluca Vacchi holds the post of the member of the directors’ board and has 30% of the shares. His cousin Alberto runs the company, and he is a modest man who is closed for the press. Gianluca tells that he is lucky with Alberto Vacchi, as he is talented in launching and maintaining a profitable business.

In Russia, people are also interested in the biography of the bold Italian millionaire. Gianluca regularly takes part in Russian television programs. In 2016, he visited Moscow to take part in the shootings of two releases of the program Let Them Speak.

In 2017, some changes occurred in the life of the millionaire, who was enjoying his life. Vacchi couldn’t pay the Italian bank on loan from nine years ago. As a result of the debt, the property of the dancing millionaire was seized. To improve his financial position, Gianluca had to shoot in the commercial, though he made it with the optimism which is characteristic of him.

In a short time, Gianluca Vacchi showed to his subscribers a new pursue – the two-story yacht. Some of his admirers assure that the Italian earns by his DJ-sets, others insist that all Vacchi’s wealth isn’t real.

Gianluca Vacchi is in excellent physical shape. Young men can be envious of his acrobat tricks. Gianluca has a fine personal life as well; the eccentric millionaire is free from prejudice.

Vacchi prefers women aged 18-25 years younger than him. The millionaire had love affairs Nina Senicar and Belen Rodriguez. In 2011, Vacchi announced that he was engaged with the TV presenter Melissa Satta. Though, a month later, the couple separated. In 2014, the press published information about the love affair of Gianluca Vacchi with the actress Michelle Rodriguez. Though, even if they had something, it was a short fling. In a short time, the millionaire was noticed in the company of Lindsay Lohan.

In 2016, Georgia Gabriele, the creative director, and designer of the Wandering fashion brand, became the main character of the millionaire's Instagram feed. Vacchi called her his wife. Georgia is eighteen years younger than her boyfriend. Though, she told that she didn’t feel the difference in the age.

The model admired Gianluca Vacchi’s trained body; he spends 2 hours every day for work-out. Having a height of 173 cm, he weighs around 72 kilos. The girl wasn't confused with the fantasies of the millionaire; she tried to play long with her husband. And it just became this with the emotional dance – the vide which hundreds of thousands of users have seen. In the summer of 2017, the millionaire and his girlfriend broke up without any explanations.

At the same time, on the charmer’s page there began to appear joint photos with Vice-Miss Universe 2015 called Ariadna Gutierrez. In a short time, she was replaced by the Venezuelan model called Sharon Fonseca. It seems that the girl has stayed in the millionaire’s life for a long time. In 2019 they still are together and demonstrate idyll on the pages of social media.

And at the beginning of 2018, the young dancer Ginevra Mavilla began to appear quite often on Vacchi’s account. The girl is a blogger too. Ginevra signs the photos with Gianluca as the joint photos with her husband, as she knows the millionaire since childhood. The millionaire has no more children except his "foster" daughter. Vacchi consciously doesn’t start a family with the kids as he thinks that he hasn’t found the woman who can become a proper mother for his heirs.

Gianluca overcomes his life difficulties as easily as he commits acrobat tricks. At the same time, Vacchi doesn’t deny himself the pleasure to continue the lifestyle of the sybarite.

In 2018, the millionaire became the participant of the international flash mob and danced to the track or the rapper Drake under the title "In My Feelings" near his house in the bright women 's outfit. To do this, he has chosen the shoes with high heels and a black swimsuit. The man wore a bright hat on his head.

At present Vacchi continues to please his admirers with new videos which he publishes in his account. In the videos, the man shows how he manages to keep in a hood shape. He regularly has training in the plastic suit and has sessions in the cryogenic chamber.

Recently, the millionaire has published the book entitled "Enjoy," where he has shared hedonism principles which he manifests.

At present, Gianluca’s net worth is around $450 million.