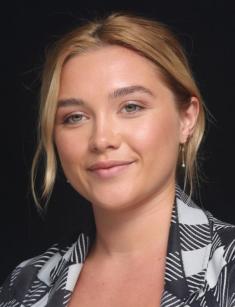 She is a talented actress with several prominent roles in Hollywood movies and TV series. The audience, as well as critics, steadily highly appreciate Florence's work. Nevertheless, the world audience is just getting to know the young actress. All that makes her one of the most interesting young actresses.

The actress spent her childhood in England, Oxfordshire. Florence had asthma and collapsed airways. That's why her family moved from Britain, finding a warmer climate in Spain. Here they spent three years. The actress said that she was happy to grow in a friendly environment and a beautiful country when she was able to swim and cycle.

She was raised with her three siblings by her father, a restaurateur, and a mother, a dancer. The girl received a privileged education. Part of her childhood The Pughs spent in Andalusia, Spain, where Florence attended the school here. However, she got her higher education in England.

She rose in a creative, close, and amiable family. She is the second oldest child in her family. All children were interested in drama, that's why they all had much common.

At the age of six, she displayed her acting talent for the first time when Florence played Mary in the Christmas play. Since that time, the girl had always known what she is going to do as an adult. She took part in numerous school plays in high school and was a promising girl. Florence attended the same school as many contemporary young celebrities, among them Emilia Clarke and Kit Harington.

The actress appeared on the screen in the mystery drama in 2014 when she was seventeen. That was her debut work and an absolute success. After this movie, she received two prestigious British nominations as a newcomer of the year and the best young performer. That time she found her a mentor – Emma Thompson.

The more significant breakthrough waited for her in 2015 when she appeared on the movie in the recurring role in the "Lady Macbeth." Florence played a complicated and dynamic character – a young lady who unhappily married on the man much older her. It was surprising to see the artist with black hair. The actress was named the major talent to watch and received the first British award.

In 2018 she appeared on the "Little Drummer Girl" alongside Alexander Skarsgard. The latter played the officer who seduced Florence's heroine. They both appeared on the striking scene at the Acropolis where they were kissing.

In 2019 she made the severe next step for the talented performer – she appeared on the Hollywood movie in the leading role. She worked with the star cast – Dwayne Johnson and Lena Headey. The critics admitted that the actress showed her from the different side – she was convincing as a wrestler. This year she also worked alongside Scarlett Johansson and David Harbour in the movie "Black Widow." The latter played the Russian version of Captain America.

Her performance in the movie "Little women" is also worth attention. Florence plays the youngest sister, who is trustful and blunt. This is not simple work as everybody hates this character. In interviews, Florence defended her heroine. She said that Amy March was not the wrong person. Florence wasn't able to express her feelings in the right way.

The other role was no less challenging for her. In 2019 she appeared on the drama Midsommar. According to the plot, she was always crying on the screen. The actress confessed that it was exhausting. She wore headphones and imagined her sisters dying.

The actress is good at imitating accents. Thus, even though she is British, she spoke the American dialect in the movie Midsommar, and it was seamless. In the other part, as Yelena Belova, she displayed an acute Russian accent in the Black Widow. Many people decided to watch this movie after they were impressed with Florence's work as well as pronunciation.

She has got a brother who became a successful actor and a sister, who is a musician. The actress is also good as a vocalist and musician. Her net worth is about $107 million.

The actress is active on social networks. She has got an account on Instagram, which is full of funny notes and photos of Florence. Once she gave the following comment about her low voice:

"Singer-Songwriter with a weirdly low voice and a confusing laugh. Sometimes people think I sound like a man. I'm cool with that."

The actress dreamt of marriage with DiCaprio. As to her personal life, there is no information about her boyfriend. It seems that the actress is more focused on her acting career of prefers to keep the law social profile.

Rumors have it that the British actress is dating the American actor Zach Braff. He is well-known for his leading role in the legendary TV series "Scrubs." In 2019 on 9 October, they were spotted at the grocery store in New York. They were holding their hands, joking and playing around.

The actress is amiable both on-screen and real life.