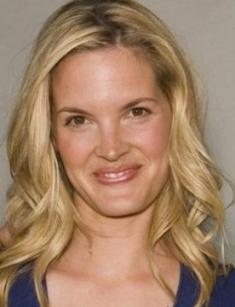 Bridgette Wilson became a famous actress, playing in science fiction films and thrillers. Brilliant acting, the ability to portray diverse characters, a delicate sense of feelings of every heroine made the woman in demand among Hollywood directors. In addition to acting, she is engaged in music.

The celebrity was born on September 25, 1973, in the city of Gold Beach, Oregon. The daughter was surrounded by the parents' care and love. Bridgette has a sister, Tracy. In her youth, the girl was interested in art and the theatre.

Ideal body measurements, the attractive appearance made Wilson participate in the 1990 Miss Teen USA. She not only became a participant in the show but also won it. In 1991, Bridgette graduated from high school.

Wilson made her film debut in 1992. Then the girl starred in the comedy sitcom Saved by The Bell. A small role allowed the young actress to bring her talent to light. From 1992 to 1993, she participated in the filming of the popular TV series Santa Barbara, in which she played Lisa Fenimore.

The famous production companies became interested in the actress. In the mid-90s, Bridgette’s filmography already included such films as Last Action Hero, Billy Madison, House on Haunted Hill and others.

In the films, the woman had rarely got an opportunity to play leading roles; however, her supporting characters became unforgettable for movie fans. So, Wilson brilliantly portrayed Sonya Blade, a character from the Mortal Kombat universe. During the filming, the actress performed all her stunts, after which she was nicknamed RoboBabe by the director of the movie, Paul W. S. Anderson.

Film critics also appreciated Bridgette’s comedy roles. The actress played the bride preparing for the wedding in the romantic comedy The Wedding Planner. Her partners were Matthew McConaughey and Jennifer Lopez.

The work of the actress in the latest film Phantom Punch was no less impressive. Wilson created a profound dramatic character of Farah, experiencing a difficult relationship with the title character, Sonny Liston. In 2009, she made an official statement that she was going to quit her acting career and devote herself to the family.

While building the film career, Bridgette also recorded songs. Having excellent singing skills, a powerful voice, the singer released her debut solo album I Only Wanna Be with You in 1994. The disc received rave reviews from listeners, which motivated the artist to record the second album. The disc, entitled Gimme a Kiss, was released two years later.

Besides, the singer recorded several duets with famous musicians such as Tommy Shane Steiner, Eric Close, and others. In 2006, Wilson participated in the popular music project The Rocky Horror Show.

In September 2000, Bridgette became the wife of Pete Sampras who had already built a successful career in tennis.

In 2019, the actress devotes all her free time to the family. Bridgette does not have pages on social media. However, Wilson’s fans post bright and spectacular photos of their idol on Instagram. The pictures depict Bridgette wearing dresses, bikinis, suits on the set.

Bridgette Wilson has a net worth of $25 million.