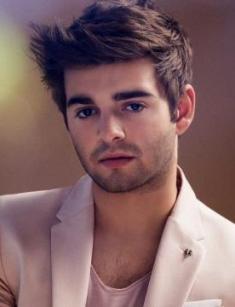 Jack Griffo was born in an ordinary American family. The producers noticed a nice guy, and he became a star of Nickelodeon projects in a short time. He is young, famous, and he believes that his most notable is waiting for him ahead.

Jack Griffo was born on the 11th of December, 1996 in Orlando, in the state of Florida. Jack is the fifth, the youngest child in the family; he has English and Italian ancestry. The boy was interested in sports and played basketball well when he studied at primary and high school. In 2015 he finished his studies at the Western Christian Academy in 2015

Already in childhood, Jack demonstrated his acting talent, and his parents sent him to study his profession at The Maile Image Modeling & Acting School in Orlando.

The aspiring actor had his debut in 2011 in the comedy series Kickin’ It, in which he played the role of Benny. The producers noticed a cute guy (his height is 173 cm, and his weight is 69 kilos). In 2011-2013 he was invited to play episodic roles in the Bucket and Skinner's Epic Adventures, See Dad Run, Jessie.

In 2011 Jack enriched his filmography with the fantastic thriller Sound of My Voice, in which he played the role of the young Peter. Next year, he appeared in the movie American Hero. The same year Griffo took part in the short film What I Did Last Summer: First Kiss and East of Kensington.

The year 2013 in the actor’s biography was remembered due to his first leading role in the series The Thundermans on Nickelodeon TV Channel. He appeared in the part of the negative character Max Sanderman, who had supernatural abilities which he had inherited from his parents.

In 2014, there came out the movie Back-Up Beep System. Jack was actively engaged in the shootings and appeared in several Nickelodeon projects: in the episode of the series Nicky, Ricky, Dicky & Dawn, in the movies Jinxed of 2014, Splitting Adam of 2015. In 2016, the actor appeared in the Henry Danger and NCIS: Los Angeles.

In 2017, the admirers saw Griffo in the comedy series The Dude Perfect Show. In 2018, the actor appeared in the episodes of the series Lip Sync Battle Shorts, The School of Rock and Knight Squad.

Since 2014 till 2018, Jack got five nominations for Kids Choice Awards for the role of Max Sanderman. Aside from his acting job, the guy was fond of music. In 2011, Griffo recorded and shot the video for the song "Hold Me" together with his girlfriend, Kelsey. The guys published their record on Youtube where it has collected several million views.

In 2013, Jack released his debut single "Slingshot," which sounded in the movie Jinxed. At present, the actor leads his YouTube channel, where he entertains his admirers with the covers of popular hits and his songs.

The actor prefers to keep his private life in a secret. In March of 2013, the guy began to date Ciara Bravo. Till the year 2016, Griffo was engaged in the relations with the actress Ryan Newman, who appeared in the roles in Sharknado 3: Oh Hell No! and The Thundermans. He was told to have a love affair with the partner Kira Kosarin who was his partner on the movie set, who played Phoebe Sanderman in The Thundermans.

The actress Paris Beralc became his next girlfriend. The lovers took part together in the show entitled Alexa & Katie. In August 2019, the fans suggested that after two years of relations the couple broke up. The reason was that Paris published a photo of the kiss with another young man on Instagram. The young people abstained from the comments and making any official statements.

In 2019, the actor appeared as a guest star in SpongeBob’s Big Birthday Blowout. He actively leads a page on Instagram, where he regularly publishes photos with his friends or pictures from his holidays.

At present, Jack Griffo has a net worth of $3 million.