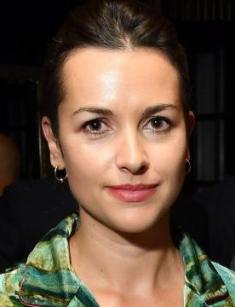 Amelia Warner began her successful acting career with the BBC television series. She rose to prominence after the release of the movie Mansfield Park, based on the novel by Jane Austen. Amelia consolidated success, starring in the films Lorna Doone and Quills.

However, after her debut in the Hollywood movie Æon Flux, the actress began filming less frequently and started a music career. She has written several soundtracks. Besides, Amelia is the mother of many children. She raises three children with her husband Jamie Dornan, the star of the movie Fifty Shades of Grey.

The actress was born Amelia Catherine Bennett on June 4, 1982, in Liverpool, United Kingdom. Amelia's parents are actors Alun Lewis and Annette Ekblom. The actress is of English, Welsh, and Swedish ancestry. The creative family broke up early. The girl was four years old when her mother took her and left for London, where they had a slow-paced life. Annette worked, while Amelia was preparing to go to school.

The young lady studied at the Royal Masonic School for Girls, where she took the first steps towards acting career, joining the theater group and performing in school productions. Amelia was born under the Gemini zodiac sign, which influenced her delicate creative nature. In her early youth, she showed a craving for art. Therefore, after graduating from high school, she entered the Fine Arts College, London, then continued to study art at Goldsmiths, University of London.

Young Amelia was also interested in music, learning to play the piano. She and her mother regularly attended the British Festival of Contemporary Performing Arts. Annette was against an acting profession, but she encouraged her daughter’s passion for music.

Amelia gained an acting experience early; as a teenager, the beautiful, talented girl was noticed by the producers and invited to play in the TV series Casualty (1998). A year later, the girl moved to the set of another series, Aristocrats (1999). The same happy year, she made her debut on the big screen. The melodrama Mansfield Park, based on the novel by the famous British author, Jane Austen, brought young Warner a leading role and made her famous.

Amelia played the title character, teenage Fanny Price. Fanny is a modest sweet girl whose mother married a poor man and thereby got on her aristocratic relatives’ bad side. Nevertheless, at the age of 10, Fanny is forced to live with her wealthy relatives, the Bertram family. It is a new chapter in the life of young Price; however, she faces humiliation, suffering, and great love, falling in love with cousin Edmund.

The dramatic talent of the young actress was noticed by Hollywood directors. In 2000, the film Quills was released. The biographical film about the odious and infamous personality of the beginning of the 19th century was nominated for several prestigious film awards, including the Academy Award, BAFTA Awards, Screen Actors Guild Awards, Golden Globe Awards. As a result, it won the Satellite Award.

Warner played the supporting role of Simone; her partners on the set were stars such as Kate Winslet, Geoffrey Rush, and Joaquin Phoenix.

In 2000, Amelia returned to TV series. Numerous fans saw her, portraying Jodie Whitemore in the series Waking the Dead, which told about the work of a London-based special police team, dealing with unsolved crimes, finding new evidence and persons involved.

The following year, the filmography of the actress included the first leading role. The film Lorna Doone shows the events which took place at the end of the XVII century. Amelia Warner and English actor Richard Coyle played representatives of two warring clans. Despite the hatred, the young people fall in love, not knowing what fate had in store for them. The film is based on the novel of the same name by writer Richard Doddridge Blackmore.

By the mid-2000s, Amelia had already been well known mainly as a drama actress in her homeland. She could diversify her filmography, starring in the comedy film Love's Brother (2004). In this movie, two brothers, Angelo and Gino Donnini, tried to win her heart of Warner’s heroine, Italian Rosetta.

In 2005, the actress played in a Hollywood film again. Warner was invited to Karyn Kusama’s science fiction film Æon Flux. Æon Flux (Charlize Theron) is a spy of the Monicans, a technocratic organization, whose task is to fight against the current government. Her sister Una (Amelia Warner) was killed when she performed an important mission. Æon decides to take revenge.

Two movies with the participation of the actress were released in 2007. The thriller Gone was filmed by British and Australian filmmakers. The plot focuses on a young couple, Sophie and Alex (Amelia and Shaun Evans), traveling along the coast of Australia. A fellow traveler persuades them to go deep into the continent. But an ordinary offer turns into a chain of terrible events.

The second movie is David L. Cunningham’s fantasy drama The Seeker: The Dark Is Rising about the adventures of boy Will Stanton, who is fighting against the coming rise of darkness because he is the last of the immortal warriors. Warner played a character named Maggie Barnes.

From 2008 to 2012, the British actress starred in three little-known films, after which she had a career break associated with the family life and the birth of children. However, the role of mother and wife does not prevent her from discovering new talents. The woman has become a songwriter.

In 2010, Amelia already wrote the soundtrack for the British short film Mam. If this event was noticed only by the actress’s few devoted fans, then the song “Please, Please, Please Let me Get What I Want," written by her in 2011 for a commercial, became known and incredibly popular all over the country.

The actress released her first album in 2015. It is a classical instrumental EP, entitled Arms.

Since 2016, Warner has been scoring films. She wrote music for the movies Mum's List and Mary Shelley. In 2017, the actress and musician released the second EP, Visitors.

Sometimes, Amelia Warner's personal life has overshadowed her career. For example, in the early 2000s, many viewers knew her as a girlfriend of Irish actor Colin Farrell, who at that time became world-famous.

They met at the premiere of the film Quills in 2000, and in 2002, newspapers wrote about their wedding ceremony in Tahiti. Later, the stars said that the marriage was rather comic and became inoperative. Indeed, the young people broke up four months after these events.

In 2010, Amelia met English actor Jamie Dornan, the future star of the sensational movie Fifty Shades of Grey. They dated for three years, and only in 2013, two movie stars celebrated the wedding.

In November 2013, their first daughter Dulcie Dornan was born, and in 2016, they had the second girl, Elva Dornan. The 36-year-old actress gave birth to the third child in March 2019. The parents do not tell the name of the newborn baby.

The actress does like to make her private life public. People cannot find family photos on social media (Twitter and Instagram). The woman only gives a clue that everything is fine in her cozy home. The pictures show a fire, burning peacefully in a fireplace, a tasty tea cake, and a big dog, a family favorite, that sleeps comfortably in the chair.

Sometimes, the paparazzi take the pictures of Dornan and Warner’s family during holidays. So, in the summer of 2018, photos of the sea trip of Amelia and Jamie were leaked to the Internet. When people saw the figure of the actress (her height is 5.51 ft. (168 cm)), it became clear that the woman was pregnant.

Nowadays, Amelia Warner devotes herself to the children and home. Sometimes she and her husband attend public events. They come to film premieres and presentations, and this is a big event for reporters who strive to photograph the star couple for a society column.

Amelia Warner has a net worth of $3 million.