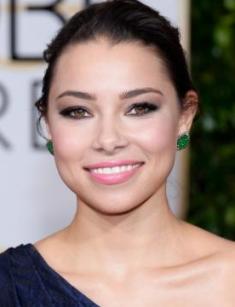 Fans of mystical series are well familiar with Jessica Parker Kennedy; she is famous for the role of Nora West-Allen in superhero projects Supergirl and The Flash.

The future artist was born on October 3, 1984, in Calgary, Canada; the girl had African, Italian, and Russian roots. Her mother, Toni Kennedy, worked as a teacher and brought up her daughter alone. The actress does not remember her father and avoids talking about him; however, she often expresses her gratitude to the mother, who always supported Jessica.

The mother and the daughter kept traveling around the country, looking for a better life. The would-be celebrity had to change schools and say good-bye to her friends; she began to express her feelings in art. Jessica debuted on the scene at the age of seven and participated in many local performances. When the young woman graduated from school, she continued her education at Mount Royal College and studied drama.

In 2006, Jessica appeared on the screen for the first time; it was the TV movie Santa Baby starring Jenny McCarthy where Kennedy played Lucy the Elf. In 2009, she returned to the same character in the sequel Santa Baby 2: Christmas Maybe.

In 2007, the artist received the first regular part in the Canadian-American series Kaya about a group of young music lovers who dreamed of becoming rock stars and created their group. Jessica’s character, Natalee, appeared in ten episodes.

The next year was marked with the first significant role in the youth movie Another Cinderella Story: the rising Canadian star personified the best friend of the protagonist Mary (Selena Gomez).

Further on, Jessica strengthened her positions in the popular series Smallville. She got the role of Bette Sans Souci (Plastique), the evil antagonist, who was wearing a costume covered with plastic bombs used for terrorist attacks. This part made the actress popular as never before.

Following the mystic theme in series, Jessica joined the cast of Fear Itself: the show consisted of several horror stories created by masters in the genre. Kennedy gained the role of Becca in the first season. However, the project did not enjoy high ratings and closed soon.

Jessica switched to the new project, the vampire series Valemont, and played one of the lead characters. It is the story about Maggie Gracen’s investigation: when her brother dies in Valemont University, she decides to get in there in the guise of a student. Jessica’s character, Beatrice, becomes her friend; they learn many secrets of the prestigious university soon.

Kennedy also has many good memories about the series The Troop and her character, the nymph Laurel; the protagonist Jake falls in love with her. Jessica spent a season in the series.

The chain of episodic roles in popular projects followed: Brothers & Sisters, Lie to Me, V, Undercovers. The big-screen debut took place in 2011: Kennedy appeared in 50/50 starring Joseph Gordon-Levitt. Besides, the artist received the part of Edouarda in Andrew Niccol’s fantastic thriller In Time; she had the opportunity to collaborate with Justin Timberlake and Amanda Seyfried there.

The season 2011/2012 brought the series The Secret Circle based on Lisa Jane Smith’s book about the adventures of young Cassie Blake, who began a new life in her mother’s home city. Melissa Glaser (Jessica Parker Kennedy) and Diana Meade (Shelley Hennig) befriend the newcomer, but Cassie discovers they are real witches.

This part of Melissa made Jessica a TV star, even though the project was closed after the first season. Many fan clubs of the artist were organized; she was giving numerous interviews and shot for magazine covers. The creators of 90210 offered the popular actress the role of Megan Rose in 2012.

Many people loved Kennedy after the pirate drama Black Sails. It shows what had happened before the events of Robert Louis Stevenson’s novel Treasure Island. At the beginning of the 18th century, the famous filibuster James Flint is going to take New Providence Island belonging to the British Empire. Jessica personified Max and brilliantly got into the character capable of hopscotching the oceans, robbing, and killing.

Three seasons passed quickly. In 2017, Jessica finished the project and immediately joined the cast of the new series, Supergirl. Her character, Nora West-Allen, has superpowers: time traveling and reaching the hypersonic speed. The young woman’s parents are notable figures in the DC universe: Barry Allen and Iris West.

In 2018, Kennedy continued to play the same character in the spin-off of Supergirl, the series The Flash.

The actress is not married, and this fact is one of the few the audience knows about her personal life: Jessica is a private person and talks only about work in her interviews.

In 2014, rumors had it that the artist was dating her colleague in Black Sails, Luke Arnold. The paparazzi took pictures of them in Vancouver, and fans believed the couple was happy together. Still, the actors denied their romance.

Jessica’s Instagram is full of photos with colleagues and pictures from vacation; she gladly poses in a swimsuit without makeup. The woman is a shopaholic and loves to buy new clothes.

In 2018, the artist appeared in the comedy Deep Murder and personified a babysitter. In February 2019, fans welcomed the news about the sixth season of The Flash with their favorite.