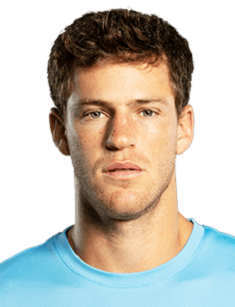 Diego Schwartzman is an Argentine professional tennis player competing on the ATP Tour. He has won three ATP singles titles and reached his career-high singles ranking of world No. 11 in June 2018. He is known as a clay-court specialist because he prefers hard courts and is noted for his high-quality return game.

Diego Schwartzman was born in Buenos Aires on August 16, 1992. His parents are Ricardo and Silvana Schwartzman. He has two brothers. One a computer programmer, the other works as a travel agent. Diego also has a sister, she is a lawyer. Speaking of his background, Diego holds Argentinian nationality and belongs to Jewish ethnicity.

As a youth, he played tennis at Club Náutico Hacoaj, a Jewish sports club in Buenos Aires that was established by and for Jews who were not allowed to join other sports clubs in the city in the early 20th century. Diego started playing tennis at the age of seven. Although he also was interested in football at an early age, he decided to shift his focus completely to tennis when he was ten. It is known that he and his siblings all attended Hebrew school.

At age 15, the future athlete had training with former World No. 10 Juan Monaco and Maximo Gonzalez, who served as his mentors. His idols growing up were Rafael Nadal and football player Juan Roman Riquelme. So with a passion for the sport at a young age, he began training early on and made if debut appearance in 2010 at the age of 17.

Diego made his first appearance in the main draw of a Grand Slam event at the French Open in 2014 but lost in the first shot. However, the same year, he won four titles at ATP Challenger Wout held in Aix-en-Provence, Prague, Campinas, and San Juan. He was also victorious in the ATP Challenger Tour Finals.

In 2015, the player reached the semi-finals in Istanbul Open. He was able to win his first-ever singles title at Istanbul Open coming in 2016. He entered the third round of a grand slam at the 2017 French Open.

Schwartzman’s 2017 season can be named as the best year of his career. By the end of the season, he scored his best points. He finished the year ranked world No. 25. He won 39 singles matches and earned $1,536,000 over the course of the season, easily improving his previous records of 17 match wins and $441,000 in the 2016 season. In 2017 he led all ATP players in the percentage of second-serve return points won and percentage of return games won, while coming in third behind Andy Murray and Rafael Nadal in the percentage of first-serve return points won. Finally, he scored his first win over a top-10 player, and then just two weeks later he racked up a second top-10 win.

In 2018, Diego competed in several events that include, Australian Open, 2018 Rio Open, having captured a title, French Open and German Open. The athlete took part in two grass-court events the same year that include Cincinnati Masters, Eastbourne International and Wimbledon. Schwartzman won his third ATP title at the 2019 Los Cabos Open. There are two persons who supported and trained the player: Juan Ignacio Chela and Leonardo Olguin, Diego’s coaches.

Stats of the sportsman can be found at www.tennisexplorer.com. There is a lot of information about the gear that sportsman use, including his famous racquet, bags, shoes, and other clothes.

Diego set records against players who were, at the time the match was played, ranked in the top 10.

In 2018, he gained the 11th spot in his career of singles ranking winning Kevin Anderson at French Open, Paris, France.

In 2019, he got ahead Dominic Thiem in Buenos Aires, Argentina; Kei Nishikori in Rome, Italy, and Alexander Zverev at US Open, New York, United States.

According to the information, the player has no serious relationships as for now. As a professional tennis player from Argentina, he can be seen in relation to other professionals from the same area, including Juan Martin del Potro, Guillermo Vilas, and Gabriela Sabatini. Later there were rumors about Diego and Argentina actress, Barbie Velez. But the player gave no comments to these talks.

When Diego was asked about having a girlfriend, he said that he tried to focus on doing sports. He noted that tennis for him comes before anything else in life.

Schwartzman’s height is five feet and seven inches but he stands tall in every match. Though his short stature is at a disadvantage, he never fails to strike back the shot. There is a funny photo of John Isner and Diego Schwartzman, where the difference in their growth is clearly visible. And, the Tennis demands of long-legged players, but Diego Schwartzman proves that bigger is not always better. He has reached a stupendous spot in his career whereas gigantic players celebrate only occasional titles. Due to diminutive stature, Diego nickname is El peque which means “Shorty” in Spanish.

The sportsman has 390,000 of followers on his Instagram account, where he posts photos from sports and shares moments from his everyday life.

On his Twitter, the athlete has gained over 100,000 of readers. He publishes the latest news from his sports life and communicates with his fans.

The net worth of the player is estimated at approximately $1 million as of 2019. Besides tennis, Diego also earns from various endorsements as well. He has been endorsed by an Italian sporting goods company, Fila for his clothing and shoes. Schwartzman has also been endorsed by sports and clothing company, Head, which also sells tennis equipment.

Diego Schwartzman is smiley and positive person. He is open to sharing his best moments of life with his audience. One of his delightful celebrations was seen after getting 2018 Rio Open Official title. He was extremely happy to get the title and gave an emotional speech. After that, he posted himself singing and dancing on his social media account. Diego’s fans shared his joy and congratulated him on the victory.