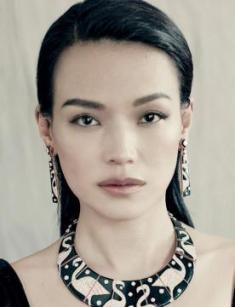 The real name of the actress is Lin Li-hui. She was born in the spring in Taipei, the capital of Taiwan. The girl with Asian appearance, who later became famous under the stage name Shu Qi, is a citizen of Taiwan, but her nationality is a blank page in her biography. It is commonly known that the island is cosmopolitan, it is inhabited by the Chinese, Mongols, Hans, and Gāoshān people. They do not know which ethnic group Lin Li-hui belongs to.

Shu Qi grew up in a poor family, so the childhood of the future movie star cannot be called happy and carefree. But miserable conditions and the desire to bluster way out of difficulty became an excellent incentive to use all chances to build a better life.

First of all, Lin took advantage of her charming appearance. As soon as she could, the young 17-year-old beauty went to Hong Kong, rightly believing that she would build a modeling career there. Even her height of 5.51 ft. (168 cm) and a weight of 121.25 lbs. (55 kg) did not prevent it. A graceful figure, sex appeal, and an alluring smile helped the girl to make it into the film industry.

The actress was showered with offers, but she carefully chose projects that did not require naked scenes. The movies in which Shu began shooting featured a high level of production and direction.

In 1999, viewers saw Shu Qi in the comedy action movie Gorgeous, in which she starred with Jackie Chan. The film grossed $ 40.5 million only in Hong Kong. In 1999, The Island Tales was also released; viewers and film critics warmly received it. The actress had every chance to reach the movie stardom if she had not refused to work in the adventure fantasy melodrama Crouching Tiger, Hidden Dragon.

Director Ang Lee, who became famous after the release of the hit movie Brokeback Mountain, invited Shu Qi to play the role of Jen. The actress agreed, but after a month and a half, she stopped shooting because her manager Manfred Wong convinced her to accept a better offer. It was the role in the Japanese Coca-Cola commercial. The director replaced Qi with her young colleague Zhang Ziyi. The project was a resounding success, and Ziyi became famous overnight. Shu Qi fired the manager and later trusted her instincts.

In the new century, the filmography of the actress included the melodrama Millennium Mambo, in which she got the leading role. The teen movie was director Hou Hsiao-hsien’s first project which was released in the USA. The film participated in the competition of the 54th Cannes Film Festival.

In 2002, the star’s career took off again. Shu Qi starred in the films Martial Angels and The Transporter. The last project, in which Jason Statham starred, became cult. The actress also landed the leading role, playing a heroine named Lai Kwai, the beloved girl of Statham’s character.

In 2004, Shu Qi played the title role in the horror movie The Eye 2, showing new acting talents. After five years, the actress appeared in the melodrama New York, I Love You. Eleven short films featured such Hollywood stars as Andy García, Natalie Portman, Orlando Bloom, Ethan Hawke, Bradley Cooper, and many others. Shu Qi appeared in the ninth short story, alongside Uğur Yücel and Burt Young.

The recent bright projects are the sequels to the action movies Fist of Fury and Armour of God, as well as the melodrama If You Are the One, which earned Qi the Huabiao Awards as Best Actress for the Taiwan region. In 2008, the celebrity was honored to become a member of the jury of the Berlin International Film Festival, and in 2009 she joined the jury of the Cannes Film Festival.

In 2015, the Taiwanese historical drama The Assassin premiered, in which Shu Qi played the title character. In 2018, the actress pleased the fans with the title role in the film The Island.

The actress, who celebrated the 40th birthday in 2017, devotes all her time to shooting. But Shu Qi does not forget about his personal life. On the set of the movie City of Glass, she met her Chinese counterpart, Leon Lai. But the love affair did not last long, and they did not get married.

The relations with Stephen Fung, a singer, director, screenwriter and actor, have been more successful. The couple met on the set of the project Bishonen and have never parted. In 2016, they got married, but there is no information about their children.

Shu Qi posts new photos on her Instagram account, delighting subscribers with news and announcements of new movies. The actress loves cats: there are plenty of pictures and videos with fluffy pets on the page, but there are no bikini pictures.

In 2019, the movie star delighted fans with the appearance in the fantasy action melodrama Shanghai Fortress.

Director Ten Huatao cast Shu Qi in the title role. This film tells about aliens who try to capture the Earth. Shanghai is the last stand of mankind, which courageously opposes invasion and enslavement.