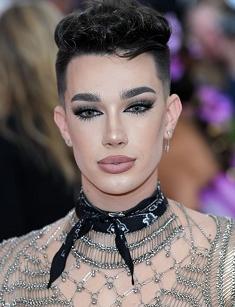 The young blogger and make-up artist has a unique style and perfect sense of beauty. When he refused from tedious work and decided to share his make-up ideas, he quickly gained popularity and radically changed his life.

As a child and a teenager, Charles was interested in beauty and make-up. Once he decided to transform the basement into his art studio. Charles's father helped him and supported in all his beginnings. The blogger has a brother, who became a social star too.

He did hairstyling, focused on make-up, and practiced on his friends. One day he understood that hairstyling bored him, and he needed more field for creativity. Thus he decided to take pictures and share them on the Internet.

He became a famous blogger when he launched the channel in 2015 devoting to beauty and make-up. In 2019 his channel has got more than 16 million subscribers. James regularly shares videos on his channel and has more than one billion views.

In 2019 the other popular YouTuber claimed Charles, Tati Westbrook said that Charles was a manipulator who used his fame to play people emotions. In less than 24 hours, Charles had lost one million subscribers and as a result, set a record in it. Charles released video response but and got negative feedback. Then he released 41-minute video thanks to which he could regain his fame and one million subscribers. This story became an example of online drama and raising toxicity in the beauty community.

His Instagram has more than fifteen million subscribers. The most popular videos are beauty tutorials. He appeared on various Internet shows and in numerous commercials.

When he was seventeen, he tweeted an offensive joke about Africa. Later Charles published an official apology. He said that this occasion taught him much and he hoped that people would learn on his mistake and never repeat it.

Charles was also claimed in transphobia because of his controversial comment where he told that he feels as not entirely guy. Later the blogger agreed that he should have better-chosen words. He stated that he unintentionally was transphobic, but that wasn’t in his mind.

The blogger came out as gay when he was twelve. He has very supportive parents who always motivate him to pursue his interests. His mother protects him even on Instagram.

The blogger is straightforward talking about his sexual orientation. At the same time, he keeps his personal life away from the public.

At present, Charles has a net worth of $12 million.