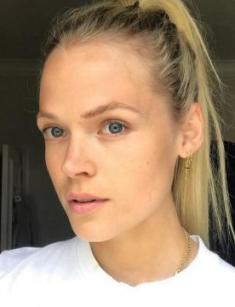 Acting used to be unsuitable for noble people, but those times are gone: artists marry princes today, and duchess and baronesses participate in fashion shows and movies. Gabriella Wilde is a perfect example: the young woman began to build a modeling career despite her noble origin and then switched to movies and series.

Gabriella Zanna Vanessa Anstruther-Gough-Calthorpe was born in spring 1989 in Hampshire. Her ancestors were barons, lords, and generals, including Stephanus Van Cortlandt, the first mayor of New-York born in America.

It was the second marriage for both parents. Gabriella has a sister, Octavia, and five half-siblings: Olivia, Arabella, Georgiana, Isabella, and Jacobi. Today, the woman is on friendly terms with her stepsister, the model and actress Cressida Bonas, born by the father’s ex-wife; Gabrielle is two months younger than she. Bonas is famous as the former girlfriend of Prince Harry; they were dating for two months.

Little Wilde was a shy child, but she surprised everybody one day when she smuggled alcohol to the prestigious Heathfield St Mary's School. She was transferred to the less respected St. Swithun’s School soon.

The teenager started her modeling career at 14 and participated in campaigns for Lacoste and Burberry; Vogue and Cosmopolitan published her pictures, and Naomi Campbell noticed her.

2009 brought the debut on the screen: Gabriella appeared in the comedy St. Trinian’s 2: The Legend of Fritton’s Gold. The role of the vampire girl in the sci-fi series Doctor Who followed in 2010. The next year, Wilde personified Constance Bonacieux in Paul W. S. Anderson’s The Three Musketeers.

In 2013, the actress participated in the third screen adaptation of Stephen King’s novel Carrie and played the main character’s classmate, Sue Snell.

Endless Love became the first project where Gabriella got a role of a rich girl; she collaborated with Alex Pettyfer there. The next character, Caroline Penvenen from the series Poldark, was as noble as the actress herself. Wilde joined the project in the second season and won the Satellite Award for Best Cast – Television Series.

The model married the musician Alan Pownall in September 2014; their first child, Sasha Blue Pownall, had been born before that. In April 2016, the happy parents welcomed the second son, Shiloh Silva. Gabriella was pregnant when she was working on Poldark and held a pug on her knees to hide her belly.

The actress has a British Bulldog and often shares his photos on Instagram, as well as other moments from her life. Gabriella can boast a slim body (her height is 5.84 feet or 178 cm., and her weight is 132.28 lbs. or 60 kg.), but she never shares pictures in a swimsuit.

In 2019, fans learned the news about the model’s third pregnancy.

The actress attended a British Vogue and Tiffany & Co party not long before her 30th birthday. She was wearing the same dress as Eva Longoria, but fashion experts believed Wilde’s look was more advantageous thanks to her boots.

June 2020 will bring the premiere of the blockbuster Wonder Woman 1984 with Wilde. The director Patty Jenkins has not revealed what role the artist will play there.