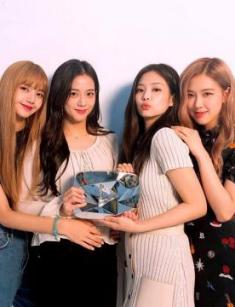 K-pop idols are a specific project of the South Korean music industry. Thousands of young and talented boys and girls have been training for years, dreaming of a musical career, fame and success. However, only a few, and even fewer, of those idols can go beyond the Korean scene. The band called BLACKPINK is one such unique experience.

History of formation and members

The history of the band is similar to that of dozens of other youth bands in Korea. BLACKPINK made a name for itself even before the final approval of the line-up, when the participants were considered trainees (that's how the industry calls K-pop boys and girls who train based on record companies to get a chance to become idols). Rosé (Park Chae-young) The girls made their debut in 2012, shooting in the videos of their agency's performers. On June 29, 2016, YG Entertainment company published the final line-up of the new band. And in August the program to promote the group was launched. The new "black-and-pink" idols were Rosé, Jisoo, Jeannie, and Lisa. The girls turned out to be very different: they looked different, used different images and even spoke different languages.

Kim Ji-soo was born in South Korea and grew up with her older brother and sister. However, as a child, she was attentive to who was younger, and her classmates even called her senior. In her spare time (and Korean schoolchildren have not so much of it) she attended drama class. Jisoo's love for chocolate and Pikachu was carried away from her childhood and she still collects pokemon figures. The singer also has a favorite dog, Dalgoi, who accompanies her even on tour, although it creates problems for the group, sometimes turning the dressing room into a toilet.

Rosé is the tallest (5'7''/170 cm) and a mysterious participant of BLACKPINK. The girl's real name is Park Chae-young. She was born in New Zealand and moved to Melbourne with her parents at the age of 8. This is why at first Jisoo helped Rosé with the Korean language.

Another distinctive feature of the singer is that she is religious. According to her parents, Chae-young was a diligent churchgoer since childhood and subscribed to the popular Christian channel. Religion is significant for Rosé. She is not going to limit herself to a musical career but also wants to write a religious book for children.

Jennie Kim has not always lived in Korea either. At the age of 9, her parents sent her to New Zealand, where she studied at ACG Parnell College. In 2006, the future singer even starred in MBC's documentary English, Must Change to Survive, where she spoke about her experience of learning the language and living in New Zealand. In addition to her native Korean and English, Jennie also speaks Spanish and can play the flute.

Lisa's full name is Pranpriya Lalisa Manoban. She was born in Thailand but not in Korea. As a girl, she was fond of music and dancing and was even a member of a dance group. Now Lalisa is the main dancer of BLACKPINK, the leading rapper, as well as the youngest member of the band, who keeps up with her image.

By the way, the fact that there is a younger member in the band remains the only concession of BLACKPINK to the K-pop traditions. Usually there is a bright leader in the band, but in this group, all girls perform equally.

The debut single album Square One went on sale on August 8, 2016. The hip-hop track "Whistle" was produced by Future Bounce and Teddy Pak and was written by famous American singer Bekuh BOOM.

This song as well as the 2nd single "Boombayah" blew up the charts and made their way to the top of Billboard, the world's top song chart. BLACKPINK is the fastest Korean band that has ever done so. And in general, there were only two Korean musicians who conquered Billboard before them, Big Bang and PSY.

On August 14, the girls performed at the Korean music show Inkigayo for the first time. There BLACKPINK won again, setting another record. No other girls band has ever won the competition so fast after their debut.

On November 1, 2016, the group presented their second single album Square Two, and on the 6th of the same month, they performed again on Inkigayo. The song "Playing With Fire" conquered the top of the world chart, and in South Korea reached the 3rd position. As a result of the debut, BLACKPINK won several music awards in the Best Newcomer category, and the Billboard edition named the girls the best new K-pop band in 2016.

In the summer of 2017, BLACKPINK began to storm the new heights and made their debut in Japan. More than 14 thousand people came to the group's showcase at the Nippon Budokan Arena, and the number of people willing to get to the performance exceeded 200 thousand.

At the end of June, the girls released another mixed style single "As If It's Your Last" with elements of reggae, house and moombahton. The song differed from BLACKPINK's usual creativity, which, however, did not prevent it from becoming the third track of the band to reach the top of Billboard's chart. Also on "As If It's Your Last" was a video clip, which in less than a day gained more than 11 million views. It became another record set by the girls. Before that, there was no such result from the Korean performers.

On August 30, the BLACKPINK mini-album was released in Japan. Already in the first week, the sales exceeded 39,000 copies, and the album took 1st place in Oricon Albums Chart. The band became the third foreign team to achieve this result during the charting period. Before them only Korean hip-hop band 2NE1 and scandalous Russian duo t.A.T.u. managed to do it.

In the autumn of 2017, a reality show BLACKPINK TV was announced, which started in January 2018. Later, in March, the first Japanese mini-album Re:BLACKPINK was reissued. In the summer the band released the 2nd mini-album Square Up. The composition "DDU-DU DDU-DU-DU" literally blew up the Korean charts, taking 1st place in six of them at once.

The video for the song was no less successful. During the first day, it was viewed more than 36 million times, which allowed BLACKPINK to break its own record. After the debut, Square Up was ranked 40th in the Billboard 200 and 55th in the Billboard Hot 100. These are the highest positions Korean girls bands have ever held in such charts.

In mid-October was presented the single "Kiss and Make Up" by British singer Dua Lipa. BLACKPINK participated in the recording of the song. The Billboard Hot 100 ranked it 93rd, and the band got into this prestigious chart for the second time in a year. A month later, in November, it was announced that the band members would start singing not only in the band, but also in their solo careers. Jennie made her debut first, and Rosé was going to be the next one.

At the end of 2018, on December 5, the first full-fledged Japanese album of BLACKPINK in Your Area was released. In the first week, the band managed to sell more than 13 thousand copies. In addition to new tracks, it includes old songs - "DDU-DU DDU-DU" and "Forever Young."

Now the band is reasonably considered to be one of the best projects in the K-pop industry. At the beginning of 2019, it became known that on April 12 and 19 the girls would take part in the American Coachella Valley Music and Arts Festival. The girls again had new achievements. BLACKPINK not only made its debut in the United States but will also become the first girl K-pop band to perform at this festival. Besides, the girls planned to go on a world tour, during which they would give concerts in the U.S., Australia, and Europe.

On April 5, 2019, BLACKPINK added a new mini-album Kill this love to their discography. The title song of the same name is a worthy competitor to "DDU-DU DDU-DU." Percussion and wind instruments dominate the melody of the track, and the song itself combines both rap-reading and vocal parts.

Fans who want to keep up to date with the latest news from the life of the band and its members subscribe to the official BLACKPINK pages on Instagram. The photos on the personal pages of the girls, which were introduced in 2018, are of particular interest.