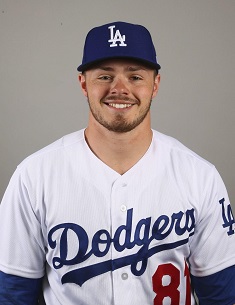 Gavin Thomas Lux is an American baseball player. He holds the position of defense called shortstop for the team Los Angeles Dodgers.

Gavin Lux was born in Wisconsin in 1997. His parents’ names are Heather and Tom Lux Jr. Besides, Gavin’s uncle, Augie Schmidt, used to play baseball at a professional level and for now, he works as a head coach of the Carthage College baseball team.

Speaking about his education, Lux studied at the Indian Trail High School and Academy, and in 2016, he was included in the list of top 50 high school students. Also that year, Gavin received his first award, the Wisconsin baseball Gatorade Player of the Year. After graduation, Lux entered Arizona State University.

At the Major League Baseball draft in 2016, the baseball team The Los Angeles Dodgers selected Gavin. They signed a contract for a $2.31 million. Gavin’s professional sports career started with the Arizona League Dodgers. Later, he got a promotion and got into the Pioneer Baseball League, namely the Ogden Raptors. Between these two steps, Lux got his experience in 56 games.

In spring 2017, Gavin got assigned to the Great Lakes Loons of the Midwest League, for whom he played in 101 games. Next year, he worked with the Rancho Cucamonga Quakes and later with the Tulsa Drillers. The 2019 year Lux started again with the Tulsa Drillers, and then, in summer, he got a promotion and got into the Oklahoma City Dodgers. The latest news from the ESPN tells us about the Dodgers called Gavin to make the major league debut in the game against the Colorado Rockies this September. Hope it will be a perfect game for the Dodgers.

This year, Lux is often compared to Corey Seager, his colleague. By comparison, Gavin has a lot of records that outperform Seafer’s experience. Let’s look at Gavin’s career stats in 2019: AB (At Bats) – 40, WAR (Wins Above Replacement) – 0.4, BA (Batting Average) - .275.

There is no information about Gavin’s current net worth, but it is known that for 2019, his salary as a Dodgers player is $555,000.

Gavin has a tattoo on his left arm. It depicts a man wearing No. 44 jersey and it reminds Lux of his friend and teammate, Clay Davison. They both were 16 years old when Gavin faced his friend's death – Davison committed suicide.

Lux has an Instagram page which is full of his sports photos; we can say that the man literally lives on the playing field.