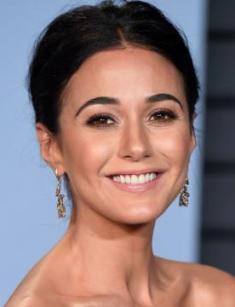 Emmanuelle Chriqui is a Canadian actress who became famous in Hollywood. She is the daughter of Moroccan-Jewish parents. Lovers of American TV shows know her mainly for the roles in the television series Entourage, The Mentalist, The Borgias which made Chriqui world famous. But the path to success of the dark-complected beautiful lady was not easy.

Emmanuelle was born on December 10, 1977, in Montreal in the family of immigrants from Morocco, Albert and Liliane Chriqui. She was a favorite child in the family; her older brother Serge and sister Laurence helped the parents to bring her up.

The parents zealously followed Jewish traditions, adhering to orthodox teachings. For example, they stinted children in many entertainments, including watching TV. The girl tried to watch movies and programs visiting friends and neighbors and admired the magical world of cinema and beautiful actresses.

After a while, the family moved from Montreal to Toronto, more precisely, to the small town of Unionville, where Emmanuelle entered the Higher School and began to attend drama classes.

But it seemed not enough. Small Emmanuelle persuaded her brother to pay acting classes for kids. The investments were not in vain. At the age of 7, the talented girl joined a local theater, and at age ten she appeared in a McDonald's commercial.

When the girl graduated from high school, she was confident to become an actress. The parents supported her endeavors. But the mother of the future celebrity could not rejoice in the success of her daughter. The woman died when Emmanuelle was 16 years old. The girl left for Vancouver to cope with grief. There she began to attend castings of various television projects and worked as a waitress in a cafe.

She landed the first roles in the Canadian-American TV series Are You Afraid of the Dark?, Forever Knight, as well as in the projects Kung Fu: The Legend Continues, Psi Factor: Chronicles of the Paranormal, and The Adventures of Sinbad. Then the girl tried her hand at dubbing; she voiced the character of Hisae Aoki in the manga series Vampire Princess Miyu.

Emmanuelle moved to the USA in the late 90s, first to New York City, then to Los Angeles, searching for great acting opportunities. She succeeded because the young actress immediately managed to get a role in the movie Detroit Rock City (1999). It was the first Hollywood movie in her filmography.

A significant debut was followed by a new part; this time she landed the leading role. Emmanuelle starred in the teen movie Snow Day (2000) about the life of schoolgirl Claire Bonner. However, it was not a great success. The actress starred in many movies and TV shows: Ricky 6, 100 Girls, On the Line, The O.C., The Crow: Wicked Prayer, etc.

Emmanuelle made a breakthrough in 2005 when she was offered a role in the television show Entourage about the life and career of young actor Vincent Chase in Hollywood. The actress played a glamorous beauty named Sloan McQuewick and joined the cast of the project in the second season.

In 2008, Emmanuelle experienced a new success, playing the leading role in the movie You Don't Mess with the Zohan, alongside super famous Adam Sandler. Chriqui portrayed the girlfriend of the protagonist, an immigrant from Palestine living in New York City.

Emmanuelle’s popularity increased. The modest girl from an orthodox Jewish family managed to measure up to recognized Hollywood beauties and models, thanks to her talent and attractive appearance. In May 2006, Maxim magazine included her in the annual Hot 100 list.

Fans have noticed that Emmanuelle Chriqui bears a striking resemblance to her colleague of Bulgarian origin, Nina Dobrev. The girls really look alike, but Chriqui is smaller because she is only 5.25 ft. (160 cm) tall.

In 2010, Emmanuelle played in the movie 13, in which Mickey Rourke, Jason Statham, and Alexander Skarsgård became her partners.

The same year, the actress finished filming in the series Entourage and received an offer to star in two large projects. So in 2011, Emmanuelle played the bit part of aristocrat Sancha of Aragon in the series The Borgias about the life of Cardinal Rodrigo Borgia.

In 2012, she appeared in the popular series The Mentalist, which had already made the leading actor, Simon Baker, a world star. Chriqui portrayed Lorelei Martins, an associate of Red John.

The recent works of the actress include the role in the series Murder in the First (2014-2016) and Shut Eye (2016). Chriqui played Gina, a hypnotist, in the last project. In 2015, Emmanuelle also starred in the drama Entourage, a continuation of the series of the same name.

The actress has not been married yet. She does not make her personal life public. But it is known that she had romantic relationships with actors such as JC Chasez, Clifton Collins Jr., and Jeremy Sisto.

Since 2013, Emmanuelle Chriqui has been dating American actor Adrian Bellani, known for the role of Miguel Lopez-Fitzgerald on the American television drama series Passions.

Now, fans are wondering whether Bellani can become the husband of the actress. The couple actively posts their photos on Instagram. In 2017, the lovers had a vacation in Jamaica, and judging by their happy faces, everything was fine, contrary to rumors.

Chriqui is currently starring in the thriller Hospitality. The movie will be released in 2018 or 2019.

Charming Emmanuelle has thousands of fans on social media. Her Instagram page has many photos, depicting her with family, friends, as well as childhood pictures. She also shares photos with or without makeup, or in a bikini.

Emmanuelle Chriqui has an estimated net worth of $9 million.