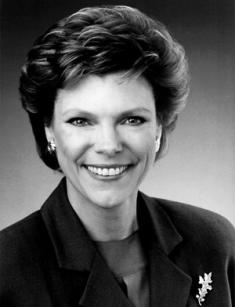 The Louisiana native, Mary Roberts started her broadcasting career in 1964. Since then she made a name for herself as a political reporter and analyst for ABC News and National Public Radio. She made a big contribution in paving the way for women in broadcast journalism and she was included in the list of the 50 best women in the history of broadcasting. She was married to Steven V. Roberts for 53 years, was a mother of two children and a granny of six grandchildren. Also, Cokie was a well-selling author of seven books. Before her death, her net worth was roughly estimated at $5 million, including all of her properties.

The birthplace of Mary was New Orleans. She was born to her parents, Hale and Lindy Boggs, on December 27, 1943. Mary became their third child. Tommy, Mary’s brother couldn’t pronounce one of her names, so he said “Cokie” instead of “Corinne”. That nickname was firmly stuck to her.

Mary grew up as a daughter of prominent U.S. Representatives, who represented a New Orleans-centered district for almost fifty years. So, she got used to influential Washington’s people at a young age. The Boggs were friends with President Lyndon Johnson and Speaker of the House Sam Rayburn, among other politicians at the height of power.

Mary got Catholic education, as she studied at the private Catholic schools of New Orleans and Bethesda. In 1964, Cokie graduated from Wellesley College with a degree in political science. The same year she got her first job.

After graduation Cokie entered the world of journalism and her broadcasting career started from producing the TV show for teens on NBC’s TV channel in Washington. The same time Cokie had airtime as a Meeting of the Minds’ host. The program was a roundtable, where foreign journalists discussed various issues. Also, Mary worked on the Fox’s satellite.

As a faithful wife, Cokie followed her husband in every city, where he took prestigious job. At first, they moved to NYC. Then she worked for some time in Greece. Right there Mary started her radio career, as a foreign CBS’ reporter. It was the 1970s, at the end of which Cokie covered Capitol Hill for NPR, reporting on the Panama Canal Treaty.

Starting in the 1980s, Cokie became the congressional correspondent. She held that post for more than 10 years. In 1981 Roberts headed the Radio and TV Correspondents’ Association. She took that post for a year. Apart from working on ABC news, in 1996 – 2002 Roberts hosted morning political affairs program, This Week, on the same channel.

Cokie faced some criticism over the course of her career, including accusations of a conflict of interest in her reporting on Guatemala given close ties to a paid lobbyist for the government of that country. Some of the concern over her reporting was connected to her close ties to her brother.

The excellent working as an ABC’s political commentator and NPR’s senior news analyst allowed her to become the Emmy Awards’ winner thrice. Over the years, the New Orleans native wrote and published seven books, become the best-selling author of We Are Our Mothers’ Daughters (1998), and Founding Mothers: The Women Who Raised Our Nation (2004).

Cokie met her future husband Steven V. Roberts in the summer of 1962. Both were participants of a political conference, hosted by Ohio State University. She was the Wellesley’s representative, while Steve was from Harvard. Afterwards they met at several similar events, and one of such meetings ended in Mary’s room.

Cookie and Steve were dating for four years by the time when a young lady was tired of waiting for a proposal from Steve. She gave him an ultimatum and said if they haven’t got married she moved to California. Steve decided to propose, as he wasn’t ready to lose his love. The two tied the knot in September 1966 in the garden of Mrs. Roberts’ family home in Bethesda.

It was a Jewish Catholic marriage and had to overcome some hurdles. Mary and Steve married in her backyard instead in a house of worship. About 1,500 people visited the ceremony and Lindy Boggs was forced to cook the entire meal for all the guests. The couple had been married for 53 years before Cokie died in 2019. They raised two children and six grandchildren.

In 2002 Cokie Roberts found out that she had breast cancer. Then the doctors successfully treated her. Soon Roberts gave an interview, in which she reflected about her longtime work, calling women to check their health regularly, especially their breast. Her diagnosis didn’t give Mary a newfound perspective on life, because she already had one.

Cokie had always cared more about family than her career. Her father died at the age 58 in a mysterious plane crash. Later she lost her sister, who was 51 years old. Roberts didn’t need any extra perspective on life. Cokie died on September 17, 2019, at the age of 75. The cause of death was complications with her longtime illness.

Reporters and celebrities mourned the Roberts’ death. CNN anchor Jake Tapper remembered Roberts as a kind and supportive mentor to many. He called her a giant and said she was smart and pithy and tough as nails. Cokie really was unique among others. Her death became a great loss. Apart from Tapper, a lot of American journalists of CNN, Fox News, and ABC expressed condolences.

Even several former US Presidents, such as George W. Bush and Barack Obama, praised Mary in tributes after her death. Bush and his wife reported that Roberts covered people for decades as a talented, tough, and fair reporter. George will always honor her memory and respect her drive and appreciate Cokie’s humor, as she was his friend.

Obama released the statement, in which he called Mary a trailblazing figure and a role model to young women, trying to be professionals in the profession, dominated by men. Then President, Donald Trump, also said some words after Cokie’s death. He reported that he had never met her, as she never treated Donald nicely. However Donald wished her family well. He said Cokie was a professional, and he respected professionals.