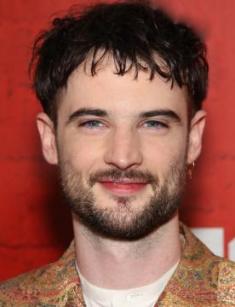 Tom Sturridge is an outstanding representative of a new generation of English actors, who has proved his talent, playing the leading roles in the movies The Boat That Rocked, Waiting for Forever, Like Minds, On the Road. The actor’s characters are extraordinary; he has portrayed people with serious psychological problems. It is not surprising that Sturridge manages to show such complex images, because acting is part of his DNA.

Tom was born in a famous family of English actors. His father is director Charles Sturridge, and the mother is actress Phoebe Nicholls. The boy’s maternal grandparents are actors Faith Kent and Anthony Nicholls.

Tom was born in Lambeth, London, on December 21, 1985. A few years later, his brother Arthur and sister Matilda appeared in the family. All three children have become actors. The father took Tom to the set when he was ten years old.

“My dad just needed a child actor, but he was scared to take responsibility for other people's children, so he took me to the shooting,” Tom says laughing.

The first role in his father's series Gulliver's Travels could have been the last one in Tom’s filmography because when he grew up, the man began to move away from acting, denied the activities of his parents and even refused to play in school productions.

The young man graduated from The Harrodian School in London, where he became close friends with the future Twilight star, Robert Pattinson. After graduation, Tom entered Winchester College but did not finish his studies and left the institution during the final year to sort himself out and understand what he would like to do in the future.

“If I were my father, I would be scared because I was constantly absorbed in my thoughts. And I would advise my son to read more because this is the fastest way to get to know the world,” the actor says.

Tom had a turning point in his life at the age of 18 when he met Hungarian director István Szabó. The man was a longtime fan of his work, and he found out that Szabó was looking for an actor for the role of Roger Gosselyn in the new movie Being Julia, based on W. Somerset Maugham’s novel "Theater." Although Tom did not plan to pursue an acting career, he asked permission to come to an audition.

Soon, Sturridge already rehearsed lines, delightedly indulged in filming, and was appreciated thanks to his talent, but not his famous surname.

The same year, Tom starred in the movie Vanity Fair. After playing a bit part on the television series A Waste of Shame, Sturridge landed the first leading role in English director Gregory J. Read’s project Like Minds. Tom played a college student, Nigel, who, following a crazy idea, brought the mind of his friend Alex under control and continued to influence it even after his death.

The brilliant movie duo of Sturridge and another English star Eddie Redmayne (Alex) was highly praised by critics, and they began to talk about Tom as a talented actor.

Although viewers saw Tom’s next work only after three years, it was a great success. Sturridge had a completely different image, playing the leading role in the musical comedy The Boat That Rocked, shot by the cult director, Richard Curtis, in 2009. He portrayed an inexperienced boy, Carl, whom his mother sent to stay with his godfather on a ship with a pirate radio station. The starring role brought 24-year-old Englishman success and popularity.

For the next three years, he played in three best movies in his filmography. These are Waiting for Forever (2010), Junkhearts (2011) and On the Road (2012). The last movie is based on the novel of the same name by Jack Kerouac and describes the adventures of a writer and his friends during their American road trip in the late 40s.

Tom played the hipster poet of the 60s, Carlo Marx, whose character was inspired by poet Allen Ginsberg. For this role, the actor won the Palme d'Or for Best Actor at the Cannes Film Festival. The movie also starred Kristen Stewart, Sam Riley, Kirsten Dunst.

In 2015, the actor played in the film adaptation of Thomas Hardy's novel “Far from the Madding Crowd." The latest works of the English actor include the romantic drama Song to Song (2017), which had a starry cast: Michael Fassbender, Natalie Portman, Ryan Gosling, Cate Blanchett, Holly Hunter, and others.

While starring in movies, Tom Sturridge also plays on the stage. The first role in the production of Punk Rock earned him the Critics' Circle Theatre Award for Most Outstanding Newcomer in 2009. In 2013, the actor was cast for the Broadway production of Orphans, in which Alec Baldwin and Shia LaBeouf also played. In 2015, Tom appeared in the play American Buffalo based on the work of American playwright David Mamet.

In spite of the abundance of love affairs in the life of Sturridge's close friend, Robert Pattinson, Tom seems a puritan. At least, there is information only about two serious relationships. From 2006 to 2008, the English actor dated American actress Camilla Belle. Fans admired the beautiful couple, even though the girl was taller than her boyfriend (Tom is 5.84 ft. (178 cm) tall) when she wore high heels.

In 2010, Tom met charming Sienna Miller, who broke off her relationship with Jude Law and was then completely free. The actors immediately started a torrid love affair. The paparazzi took provocative pictures of the couple walking in an embrace. And they did not think to hide the relationship.

In December 2011, the lovers got engaged, and in 2012 they had a daughter, Marlowe Ottoline Layng Sturridge. However, Tom and Sienna did not become husbands and wife. In 2015, the couple broke off the engagement, which upset their fans. Despite the breakup with Sienna, Tom spends a lot of time with his daughter, whom he treats with incredible love.

“Now it is my duty to defend her,” the father admits.

In 2018, the actor played the role of Jack in the series Sweetbitter, while participating in the shooting of the horror Velvet Buzzsaw, which will be released in 2019.

Tom Sturridge has a net worth of $3 million.