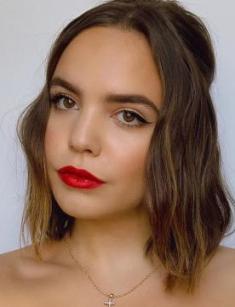 Few child actors manage to remain on the peak of fame as they grow older; Bailee Madison is one of such lucky cases. The audience recognized her after the movie Bridge to Terabithia, and Bailee also produced her own movie at the age of 15. Nowadays, the artist continues to be in demand in Hollywood.

Bailee was born on October 15, 1999, in Florida. She was the sixth and youngest child in the family. The little girl appeared in a commercial at two weeks and attended various auditions with her mother and siblings later.

Bailee was a fidgety kid: she would often get out of a jogging stroller, play tricks, and interfere with the jury members’ work. However, people noticed Maison thanks to this behavior: she received her first part in the movie Lonely Hearts when she was auditioning with her elder sister, Kaitlin. It was the young star’s breakthrough.

Bailee’s mother did not want her daughter to become an actress of one role and continued to take her to auditions. Thanks to the family support, incredible talent, and persistent nature, the artist managed to get significant parts. At the same time, the mother wanted Bailee to have a normal childhood; they created a timetable that implied some time for rest and games. Bailee courageously bore her responsibilities: she often went to Los Angeles for work and returned to Florida for school.

After Disney’s Bridge to Terabithia, where Bailee personified the main character’s younger sister, the actress became immensely popular and conquered millions of hearts. Further on, her talent manifested itself in dozens of movies and TV series. People remember her Young Snow White from Once Upon a Time; the crime drama Conviction, the horror Don’t Be Afraid of the Dark, and the TV sitcom Trophy Wife are also among the most notable projects.

Despite her young age, Bailee has already collaborated with many masters: Josh Hartnett, Natalie Portman, Adam Sandler, Hilary Swank, Selena Gomez, and others.

Just like any celebrity, Bailee Madison is the center of fans’ attention all the time. She has not been involved in scandals and avoids black P.R. to make people talk about her.

The actress actively shares materials on her Instagram page, including photos in a swimsuit or pictures with her boyfriend.

Bailee used to date the participant of X-Factor, the musician Emery Kelly, and the actor Alex Lange. In 2019, the soloist of the group New Hope Club, Blake Richardson, became her partner.

In 2019, Bailee continues to develop her career; one can see her in movies, music videos, and commercials. Besides, the woman frequently attends various ceremonies, exhibitions, and parties. She has changed her style recently: put off some weight, dyed her hair blonde, and chose more adult-like makeup.

Fashion is the artist’s hobby: she creates her own clothing line and participates in shows. In addition, the celebrity likes to dance and rest actively. The singer Selena Gomez is her friend; they can often be seen together.

Bailee Madison’s net worth is estimated at $6 million in 2019.