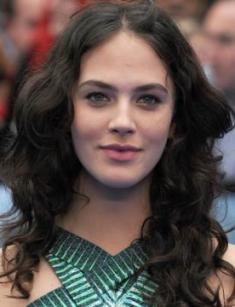 Jessica Brown Findlay is a British actress who earned much popularity thanks to the role of Lady Sybil Branson in the series Downton Abbey. Nowadays, the artist appears in series and full-length movies as well.

Jessica Brown Findlay was born in a provincial town, Cookham, on September 14, 1989. The girl’s mother worked as an assistant to a teacher; the father was a bank investor. The grandfather added “Brown” to the second name of the family.

Little Jessica showed much interest in art. She attended dance classes at National Youth Ballet, the part of the Associates of the Royal Ballet, and received an invitation to The Covent Garden when she turned 15. It was the first success of the young talent.

Findlay was schooled at Maidenhead and then continued to study at Arts Education School. It took the young woman two years that her dancing career was over: several severe traumas and a bad ankle operation made further development impossible.

Fortunately, Jessica had been thinking about acting for a long time. Thanks to an art teacher, the would-be celebrity entered the Central Saint Martins College of Art and Design and began to polish her acting skills immediately.

Jessica debuted on the screen in 2009; it was the series Downton Abbey about the events in the early 20th-century England. Critics and the audience were talking about the project a lot; the series won Emmy, the Golden Globe, BAFTA, and other prestigious prizes.

The next part in the series Misfits was equally popular. Further on, Findlay expanded her filmography with other significant pictures, such as John Maclean’s Man on a Motorcycle. In 2011, one could see her in Albatross starring Niall MacCormick. This project brought several nominations for Most Promising Newcomer. Jessica did not forget about series and played in Black Mirror and Labyrinth.

Tim Burton considered the artist as a possible candidature for the main character in his Alice in Wonderland but preferred Mia Wasikowska in the end. In 2013, Jessica co-starred with Colin Farrell in the drama Somewhere Winter.

The beautiful, charming woman is popular among men; however, she prefers to keep the details of her personal life secret. Journalists managed to discover some facts, though. In 2010, Findlay was dating an impressionist artist Thomas Campbell, but the couple broke up in 2012. Today, there has been no information about the actress’s relationships.

As the celebrity confessed in one of her interviews, she likes to create poetry in her spare time.

In 2018, fans welcomed the TV adaptation of the popular epistolary novel The Guernsey Literary and Potato Peel Pie Society. In 2019, Jessica Brown Findlay continues to work on the series Harlots; she has been a guest on a cooking show and fashion program; she frequently gives interviews to glossy magazines.

There are many fan pages on Instagram and Facebook; people post the actress’s photos from recent events, new trailers, movie posters, and the information about old projects. There are few pictures in a swimsuit; most of them are screenshots and filming moments from Downton Abbey.