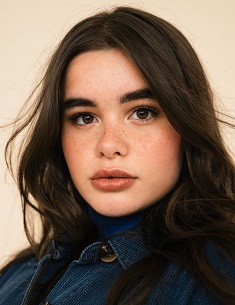 The young actress and model, a bright supporter of body-positive philosophy. She started working on one of her stores and sending pictures to popular magazines and modeling brands.

Her grandmother and mother raised the girl. Though she was born in New York, she spent her childhood in New Jersey. Her mother is a chef. Since childhood, Barbara was interested in the beauty industry. Barbara confesses that she was a dark child and was insecure about her body.

Her successful appearance in the popular TV series made her one of the most popular young actors. Barbara tried herself as a director working on the music video by Dounia. One of the most successful projects is Euphoria, where she played alongside Hunter Sсhafer, Alexa Demie and Jacob Elordi.

She worked on web series devoting etiquette. This show brought her additional popularity and allowed her to appear on the other web series “Body Party.” For the project “How to Behave” the actress got her first award and later was included in Time”s top-30 influential teens. The young actress is the right influencer who has a multitude of social media followers.

She is a plus-size model who made her career brighter thanks to extravagant statements and behavior. She keeps a body-positive lifestyle and advocates fat-shamming. She worked with various notable brands, Target, H&M, Adidas, Asos and Forever 21 among them.

She appeared on American Apparel when Barbara was 16. This experience was somewhat controversial for her, as people gave negative comments. There were 10000 notes on Tumblr where people wrote:

“she looks like she eats taco bell all day.”

Barbara is a very hard-working girl, and her net worth is about $500,000. She stays single and prefers to keep her personal life away spotlight. She likes reading, theatre, and artwork. Her favorite actress is Jennifer Lawrence. The actress has got her own Youtube channel where she posts make up related videos. Her body statistics are 40-34-48.

The actress prefers cheap and comfortable clothes because she sees how quickly clothes become old. Her style icon is Rihanna.