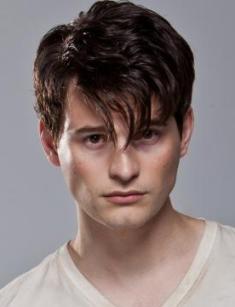 This American actor starred in the TV series Beauty and the Beast and True Blood. He also does voice-overs for video games and himself is a twitch streamer. He is married to American actress Amelia Rose Blaire, whom he met on the set of a movie.

Bryan Dechart was born on March 17, 1987, in Salt Lake City, Utah, the United States. The actor spent his childhood in Detroit. Bryan later enrolled at New York University in the faculty of arts, graduating with honors.

After that, the actor continued his studies in various theater and acting schools and even went to Italy, where he studied Commedia Dell'arte.

In the Guiding Light television series, the actor performed one of his first cameo roles. A year later, Bryan appeared in Law & Order: Criminal Intent project, in one of the episodes in the part of young Younger John Silvestri.

In 2012 the series Jane by Design came out, in which the actor played the role of Eli Chandler, one of the main characters. The series tells the story of the life of a girl named Jane. At the age of sixteen, the character managed to get a job in a prestigious company and now conquers the world of business under an influential boss. At the same time, the girl continues to study at school and pretend to live a healthy life of a teenager.

The next project, which starred Bryan was Switched at Birth. This is a drama series about two teenage girls who were mixed up at birth in the hospital, and as a result, they grew up in other people's families in a completely different environment.

The truth was revealed after a school laboratory work, during which one of the girls discovered that her parents' blood types did not match her own. Families find each other, and complicated relationships are established between them. Bryan Dechart plays the role of Graham in the series.

In 2013, the actor performed in the series Beauty and the Beast. He got the role of Aaron Keller, a minor character, the nephew of Vincent Keller. Aaron appears in the second season, in which he is investigating the arson that an attacker arranges in Manhattan. The character calculates the arsonist's next target and travels to this building alone to stop the villain.

Aaron discovers the criminal and tries to shoot him, but the villain takes over, and Aaron is left to die in a burning building as a result of this battle. At the last moment, his uncle Vincent Keller, the protagonist and the holder of superpowers, finds him and saves his life. Detective Catherine Chandler eventually shots the villain arsonist.

In 2014, the movie Dakota's Summer was released, in which the actor played the role of Taylor Chase. The motion picture is about the life of a young American girl Dakota Rose, who grew up among cowboys and learned to get along with horses since childhood, but she was not too good at it. Later, the girl finds out that she is adopted. The character is forced to reconsider her ideas about life, learn more about the past, and find her place in the world.

The actor also starred in the series True Blood, dedicated to vampires. The script was based on a series of novels The Southern Vampire Mysteries. The series has elements of black comedy and horror. Bryan plays the role of Dave. The character appears in one episode of the seventh season called "Death is not the End."

Bryan played a significant role in the horror film The Remaining. Dan, Bryan's character, and his fiancée Skylar are merrily celebrating their wedding when suddenly a strange event occurs that forces the couple to seek refuge. Winged demons hunt the characters and the weather behaves extremely strange. Dan and Skylar hide in a nearby Church with the survivors. They think it's the beginning of the Apocalypse.

Bryan Dechart's wife is actress Amelia Rose Blaire. The actors have worked together on several projects, including the series True Blood and the movie Commencement in 2012. Bryan and Amelia also collaborated on the development of the computer game Detroit: Become Human.

The wedding took place on June 2018, the year before the couple got engaged, and the first meeting of Bryan and Amelia took place in 2012 when the actors became colleagues on the set of the movie Commencement.

Bryan Dechart is 6 feet tall, and he weighs 176 pounds. The actor has accounts on Twitter and Instagram.

Bryan Dechart’s net worth is estimated at $10 million. In 2018, the video game Detroit: Become Human, almost an interactive movie in the style of neo-noir, came out. The game has three characters, each corresponds to its storyline, and they all eventually add up to the whole picture. Bryan Dechart here plays the role of a game character named Detroit Connor.

In the story, the company-manufacturer of androids created Connor as a prototype, which is designed to fight with other androids, if they deviate from the programmed behavior and become rebels. However, as the game progresses, the character itself can become "deviant."

Other active characters in the game are Marcus, the leader of the Jericho base, which belongs to the resistance forces, and Kara-a household Android who becomes a deviant due to abuse of the master.

Due to a software glitch, deviant androids have a will of their own, similar to a human's. In addition to these three, fans of the game admire the character Gavin Reed, a Detroit police detective, played by actor Neil Newbon.

The game completely copied the appearance of the actors, and with the help of motion capture technology, the actors performed all the possible actions themselves, that's why the game looks so natural.