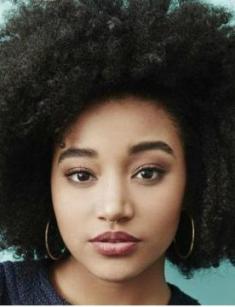 Amandla Stenberg became world-famous playing her debut role. At the age of 14, the American actress was cast in the project The Hunger Games. Her heroine Rue, who died in the arms of Katniss, made viewers cry in cinemas around the world.

The resounding success, including the awards, made Stenberg choose projects carefully. Although her filmography includes several movies, Amandla played a prominent role in each of them.

Amandla was born in Los Angeles on October 23, 1998. Her mother Karen Brailsford chose an unusual name for the girl. The woman is an African-American who was born in South Africa. The name “Amandla” means “power” in the Zulu language, which is used in this country.

The actress's father, businessman Tom Stenberg, is Danish, and his mother is from Greenland. When he married Karen, the man was already raising two daughters from a previous marriage, so Amandla has older half-sisters.

When Amandla told the press about her parents, she emphasized that her mother always supported the daughter's desire to realize her dreams. The father taught Amandla to play the guitar. In elementary school, the girl learned to play the violin, and as a teenager, she became interested in playing the drums.

The beginning actress made her debut in 2002. At the age of 4, Amandla began playing in commercials. But the girl started a career in the film industry later. The first project with her participation is the action movie Colombiana, produced by Luc Besson and released in the summer of 2011. The story focuses on Cataleya, a professional killer who wants to avenge the drug mafia for the death of her father. Zoe Saldana played the title role, and Amandla was involved in the scenes showing the childhood of Cataleya who witnessed her parents' murder.

The trilogy about Panem by Suzanne Collins was gaining popularity during these years. The American actress became a fan of this work. Later, Stenberg admitted in an interview that even then she understood that the character of Rue was close to her, which she told her mother. A month later, the company that launched the film adaptation of The Hunger Games announced that Amandla Stenberg joined the cast led by Jennifer Lawrence. The sincere acting of the 13-year-old actress earned her several awards.

Later, the actress joined the cast of the first series in her career. Amandla appeared in 4 episodes of the first season of Sleepy Hollow. Her character is Macey Irving, the captain’s daughter.

After her debut on television, the girl decided to fulfill her potential in the music field. Amandla began to play the violin and sing with singer-songwriter Zander Hawley. Two years later, having chosen the name Honeywater, the girls released their first and so far the only album. The genre of their songs is the folk-rock. In the autumn of 2015, the girls appeared on the cover of Dazed magazine, and Stenberg was called “one of the most incendiary voices of her generation.”

By that time, the actress’s filmography had included only two, but quite significant projects. Firstly, Amandla made her dubbing debut. In 2014, she voiced Bia, the daughter of the title characters of the sequel to the animated film Rio. Jesse Eisenberg and Anne Hathaway voiced Bia’s parents, macaws Blu and Jewel.

In 2015, while developing her music career, Stenberg starred in six episodes of the sitcom Mr. Robinson and also auditioned for the movie As You Are about the teenagers of the 90s. It premiered in 2016 at the Sundance Film Festival and won the Special Jury Award.

Later, the actress's credentials included a new bright work. She participated in the advertising campaign for the brand, Stella McCartney. She appeared in a commercial for the fragrances of the fashion house, alongside Madonna’s daughter, Lourdes Leon.

In 2017, the melodrama Everything, Everything was released, featuring the actress. Amandla landed the leading role again. In the movie based on the novel by Nicola Yoon, the actress played a curious, easygoing girl, Maddy, who could not leave her house due to her illness. Neighbor Olly tries to help his friend.

The movie was shot in Vancouver. The role of kind-hearted Olly went to Nick Robinson, an American actor who gained popularity thanks to the television show Melissa & Joey and the movies The Kings of Summer and Jurassic World.

In 2017, Amandla made a real breakthrough. She has starred in three Hollywood movies, which are now going through the post-production stage. They are scheduled to premiere in 2018.

Amandla Stenberg does not hide either political preferences or personal ones. At the age of 17, she told the press about her bisexuality. In 2016, in an interview with Elle, the actress changed her mind about orientation, saying that bisexuality did not include transgender people, and concluded that she considered herself to be a pansexual.

In June 2018, the girl said in an interview with Wonderland that she defined herself as a lesbian.

"I was so overcome with this profound sense of relief when I realized that I’m gay – not bi, not pan, but gay – with a romantic love for women," Stenberg said the MTV representatives.

In 2016, tabloids covered the news about Amandla who went to prom together with actor Will Smith’s son. The fact was that both Stenberg and Jaden Smith wore dresses. The actress posted the scandalous photos on Instagram.

Stenberg is frank and open not only about personal life but also socio-political issues. She participated in the feminist movement and was even was named "Feminist of the Year" in 2015 by a non-profit organization for women.

In 2018, viewers will watch three movies, featuring the American star. In September, the fantasy thriller The Darkest Minds will be released, in which Amandla played a teenager with supernormal abilities who survived an unknown epidemic among children. Her heroine will have to find the remaining survivors and escape from those who provoked the tragedy.

Then, the drama The Hate U Give, which central theme is close to public activist Amandla, will premiere. The plot is based on the American news, which showed a young African American who was killed by a white policeman. The witness of the tragedy is the girlfriend of the deceased guy, schoolgirl Starr Carter (Stenberg). Now the girl has to testify. The movie features Anthony Mackie and Regina Hall, as well as K.J. Apa, the star of the series Riverdale.

The drama Where Hands Touch is scheduled to be released at the end of the year. The movie was shot by the English production company, but later the American company acquired the international distribution rights to the film.

Amandla regularly updates Instagram and Twitter. You can follow the news about the life and career of the actress on these social media. The actress posts not only everyday pictures and photos of social events but also pics and trailers of upcoming movies with her participation.

Amandla Stenberg has a net worth of $2 million.